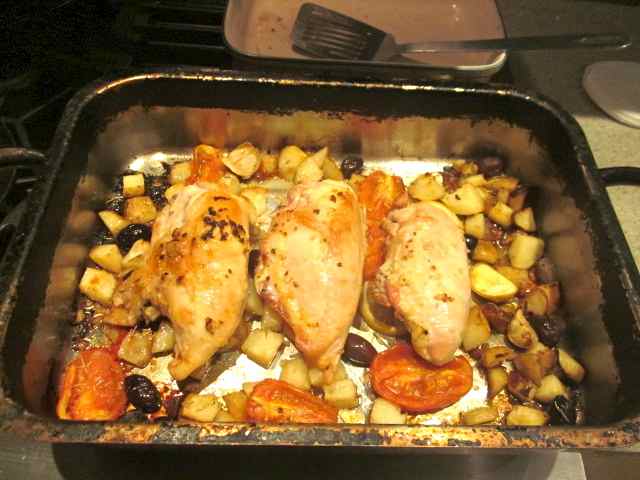 As soon as I put the dinner on the table, Nina said, “Why is there this gross thing on my plate?”

She was referring to one of my favorite meals: roasted chicken with lemon, garlic, tomatoes, and potatoes. I had sliced a bit of the chicken breast up for her, and put it on the plate with a bit of extra, oven-roasted rosemary potatoes that I had made just for the girls, because I knew that they wouldn’t like the dish I was making.

Nina was having a bit of a blood-sugar moment, so I let it go. She ate the chicken, ate the potatoes, and had her side of green beans. All was well. How could it not be? The lemon-chicken dish is a divine combination. The pan is full of sweet roasted tomatoes, savory olives, and rich cloves of roasted garlic. Yum!

Even before my first bite, I knew things were going to turn out fine. As I sat down with my plate full of food, her sister had let slip something that made me want to laugh. Referring to the perfectly roasted drumstick and thigh I was about to eat, she said, “That looks like a curled up cat. The world’s tiniest cat.”

Preheat the oven to 450 degrees.

Mince 4 of the garlic cloves and then mash with the salt to make a paste.

Whisk together the garlic paste, lemon juice, and 2 of the tablespoons of olive oil in a small bowl.

Lay the sliced lemon in the bottom of a large roasting pan.

Dip the chicken parts in the garlic-lemon-oil mixture, and place them skin-side up on top of the lemon slices in the pan. If there’s any mixture over, set aside. If not, don’t worry.

Toss the potatoes, tomatoes, and remaining garlic cloves in a bowl with the other tablespoon of oil.

Arrange the vegetables around the chicken and toss in the olives and the rosemary.

Roast in the oven for about 45 minutes to an hour, depending, or until an instant-read meat thermometer reads 175 in the breast.  If you had any of the lemon-garlic-oil mixture left over after putting the pan in the oven, you can baste the chicken with it about midway through the roasting.

Notes: The recipe is adapted from “Gourmet Every Day.” Also, the picture above depicts a version of the dish made just with chicken breasts, per that book's original recipe. I make it with a whole chicken so I have leftovers for lunch the next day.