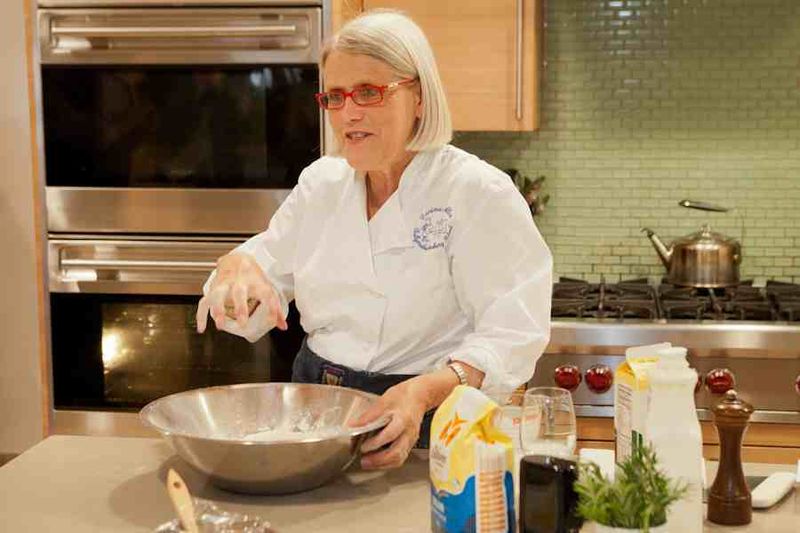 On Wednesday, I was invited to a cooking demonstration by Darina Allen, one of Ireland’s leading chefs. She runs a cooking school, Ballymaloe, in the middle of a 100-acre organic farm, and she’s the author of “Irish Traditional Cooking,”  a fascinating tome about the culinary history of the Emerald Isle.

Allen is a sixty-one-year-old, white-haired wonder, a ball of energy whose broad shoulders are only outdone by her broad smile. With the support of Kerrygold and the Irish Dairy Board, she regaled a small crowd of esteemed food-bloggers (this author included!) at Cooking by the Book, on Worth Street, in lower Manhattan, as she made Irish Soda Bread, spinach and potato soup, and an apple tart.

Her take on Irish Soda Bread captivated me. I grew up eating it as a kid, as my mother, who was born just a few hundred kilometers north of Ballymaloe, would make a loaf at least once every few days. But, as I learned from Allen, what we were eating all along was not Irish Soda Bread, but something slightly different.

Irish Soda Bread is made with buttermilk or sour milk. Back in the day, all the houses in Ireland would have a cow, and that being the time before refrigeration, some of the milk would eventually spoil. In the nineteenth century, when bicarbonate of soda became widely available, the farmer’s wife quickly found a use for it—making bread. The baking soda is what gives Irish Soda Bread its middle name.

It’s a very quick bread to make, as my mother can attest (in fact she can make it so fast that I had to plead with her to slow down a few years ago so she could show me how—I have a video of that somewhere and her recipe, too, but I can’t lay my hands on it at the moment), and as Allen demonstrated. The baking soda reacts with the acid in the buttermilk, releases bubbles of carbond dioxide, and gives the bread its lift. It’s important to get the dough into the oven before that effect passes.

The dough can be made in about as much time as it takes to preheat the oven. The trick, as Allen is demonstrating in the photo above, is to form your hand into a claw, and mix, in a wide low bowl, the dough in one, continuous, circular motion. Start at the center, and by the time you reach the outside of the bowl, your dough is ready. It’s as simple as that. And the ingredients list, according to Allen, is simple too—just four ingredients: salt, baking soda, and buttermilk.

But my mother made her bread with raisins in it, and Allen had a name for that. “When the bread has raisins or currants in it, it’s not Soda Bread. It’s a Railway Cake, with the idea being that there’d be one currant for each station on the line,” she said.

Sieve the dry ingredients. Make a well in the center. Pour most of the milk in at once. Using on hand, mix in the four from the sides of the bowl, adding more milk if necessary. The dough should be softish, not too wet and sticky. When it all comes together, turn it out onto a well-floured work surface. WASH AND DRY YOUR HANDS.  Tidy it up and flip over gently. Pat the dough into a round about 1½ inches deep and cut a cross on it to let the fairies out! Let the cuts go over the sides of the bread to make sure of this. Bake in oven at 450 degrees for 8 to 15 minutes, then turn down the oven to 400 degrees for 30 minutes or until cooked. If you are in doubt, tap the bottom of the bread; if it is cooked it will sound hollow.