Four Stars for Baked Macaroni with Ricotta, Spinach, and Mint, from “Parents Need to Eat Too” 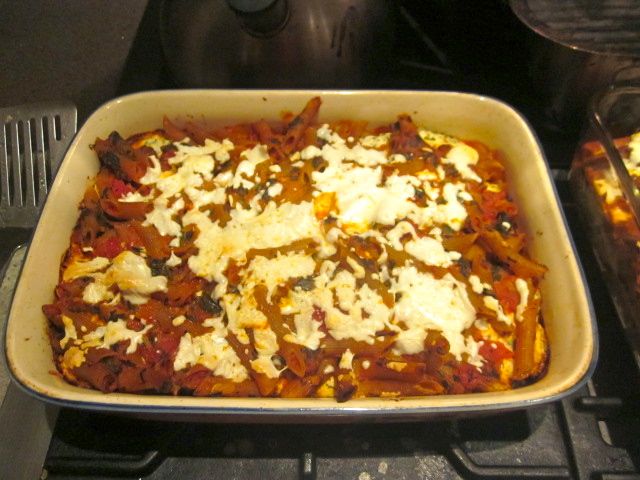 As I mentioned on Saturday, I was planning to make Debbie Koenig’s “Baked Macaroni with Ricotta, Spinach, and Mint,” from her forthcoming book, “Parents Need to Eat Too,” for dinner. I wanted to serve the dish to help stretch a roast chicken I was making for my in-laws and my family.

I’m not so keen on baked pasta dishes, but this one promised something different. It had mint in it, and that sounded great. Also, my kids love mint. They pick it in the back yard of their grandmother’s house and eat it by the fistful every time they visit her. And sure enough, when I was done washing the mint, Pinta wanted not one, but two and not just two leaves, but two big ones. And she brought the same to her sister, Nina. And then did it over and over again. I was starting to think I might not have enough mint for the recipe.

Because this was the first time I was making the recipe, I tried to stick to its exact measurements and suggestions. All the same, I couldn’t help myself. I just had to make a few changes, and that to me is the beauty of cooking for yourself—you want to put marshmallows in your risotto, be my guest. That might not be the way I would make it, but, hey, I’m not you.

All I wanted to do was to add a little garlic, and to change the way she adds the spinach. In her recipe, she has a great time-saving technique of cooking the spinach with the pasta. I wanted to chop up the spinach so my girls wouldn’t object to its presence. Little bitty pieces, I figured, would go unremarked upon, and may even be mistaken for mint.

I didn’t actually think my girls would eat the dish, though, because they have a heartless way of rejecting all new things these days (unless, perhaps, they have marshmallows in them). So figured, what the heck, I’ll try and make it as delicious as possible. They do eat spinach pizza, so a little spinach and garlic might just work.

I sautéed the spinach with the garlic in advance, and then chopped it finely. After the penne was par-cooked per the directions, I tossed it in with the pasta.

I also made a few other changes as I went along. I doubled the amount of mint—from ¼ cup to ½ cup, chopped—because I happened to have washed more than I needed, and I figured more of a good thing would just be better.

And I just about doubled the amount of ricotta—from 1 cup to 15 ounces, because that’s the amount that was in the container I bought, and frankly, what was I going to do with a spare seven ounces of ricotta?

I followed the rest of Koenig’s directions to the letter, and in the end I think I would have put even more cheese in the dish. And more pasta sauce. But that’s just me

As for the ultimate arbiters of the dish? Nina and Pinta firmly rejected the pasta at first offering. I didn’t make too big a deal of it. I reminded them that it had mint in it, and that they had been gobbling that up before dinner. I pointed out that it was full of just about the same ingredients as pizza, but then I dropped it.

Frankly, it didn’t matter to me if they ate it or not. The rest of the dinner consisted of roast chicken and a romaine salad. They love both those things, and if that’s all they wanted, I was content with that. That menu is a bit Atkins, but they get plenty of carbs and calories elsewhere during the day.

And so my light touch paid off. Nina ate her small serving and said, “I liked it but I didn’t like it.” And, after pointing out to her that she ate it all, I left it at that. Okay, when she asked for plain pasta, I told her I didn’t have any. If she was hungry, she could eat the pasta I made. And sure enough, as dinner was winding down, she sheepishly requested some more.

I gave it to her without any fanfare, and then her strident younger sister who had been firm in her resolve not to touch the pasta, starting eating her serving, and asked for more, too, when that was gone.  If this website had a star-rating system for new recipes, based on their reception of it, I’d have to give it four stars! And maybe make it 4.5 stars, because I had the leftovers for lunch the next day, and they were quite yummy.

Here is my adapted recipe. For Koenig’s original recipe, click here, or better yet, buy a copy of the book. It’s on sale tomorrow, Feb. 21, here and a bookstore near you.

Baked Macaroni with Ricotta, Spinach, and Mint, adapted from “Parents Need to Eat Too”

In a frying pan, sauté the garlic and the spinach until the spinach is completely wilted. Remove from the heat, and chop finely. Toss spinach on paper towel to remove some of the liquid while preparing the rest of the recipe. Set aside.

Bring a large pot of salted water to a boil

Cook the pasta for 1 minutes less than directed on the package.

While the pasta is cooking, combine the ricotta, Parmesan, mint, and pepper in a small bowl and set aside.

When the pasta is cooked, drain well, then return pasta to pot and add the spinach. Mix well.

Add the entire jar of sauce to the spinach and pasta and stir to combine.