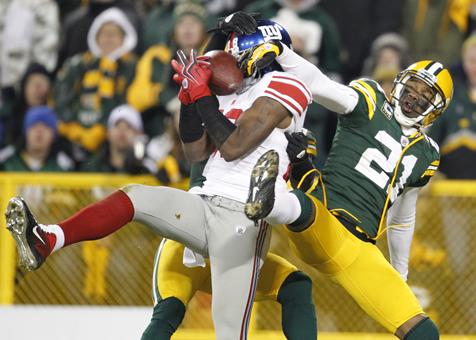 This was a rare occasion. In my circle, I don’t have many football-watching friends (well, that’s not entirely true: one friend has repeatedly invited me to Giants Stadium to share his home-field tickets, but I’ve never gone). Last weekend, though, while in Lake Placid, I discovered that my friend E., as I’ll call her here, was my kind of football fan. She liked the game when it was playoff time. I don’t have the patience for regular season games (note to self: ask shrink about that), but when the end of the season is on the line, I’m there.

So we set out to tune into the Giants, but missed their triumph over the Atlanta Falcons because we were watching bobsledding practice (there are some things you can do in Lake Placid that you just can’t do anywhere else, at least not on the East Coast). Having failed to catch the Giants victory, we settled for the first half of the Broncos-Steelers contest. Clearly, our football-watching skills needed work, because the second half of that game was by far one of the most exciting finishes in playoff history (or so I subsequently read).

Still, we had fun, eating popcorn and guacamole and drinking beer. So, excited by the Giants’ excellent playing of late, I invited my friends back over for the most recent game, and I whipped up a batch of Frikadeller (Danish meatballs).

Football and Danish meatballs are not exactly a natural combination, but let me tell you, they are a great one. I was able to make the meatballs ahead of time, and keep them warm in the oven. This meant I was sipping a Corona on the couch while the game was on, and not standing in the kitchen.

I had never heard of Frikadeller before last year. I first came across them in Laurie David’s excellent book, “The Family Dinner.” The recipe comes from David’s personal chef, Kirstin Uhrenholdt; it was her grandmother’s. There are many nice things about them—kids love them, they’re easy to make, and they’re delicious being the top three. My friends and their son and my family gobbled them up—at half time, of course.

In a large bowl, combine all the ingredients except the turkey. Stir well until mixed together. Let the mixture rest in the refrigerator for about ten minutes, until the breadcrumbs absorb the liquid

Add the ground turkey to the bowl and mix well

Oil a baking sheet and set it nearby.

Heat a large frying pan with some oil for frying.

Using a spoon and/or your hands, make small balls out of the mixture and place the mixture in the frying pan. Flatten the balls so the are no longer round, and are more oblong than circular.

Fry on one side until brown, and then flip.

When brown on both sides (more or less), remove the meatballs from the frying pan and slide them on the baking sheet.

Repeat until all the mixture is used up and you have a baking sheet full of meatballs.

Bake the meatballs in the oven for 20 minutes.

Serve with a hearty bread or some other starch (I made a variation on fried rice) and a vegetable (I made a salad).

Sufficient for 4 adults and 3 children easily. Also good the next day.