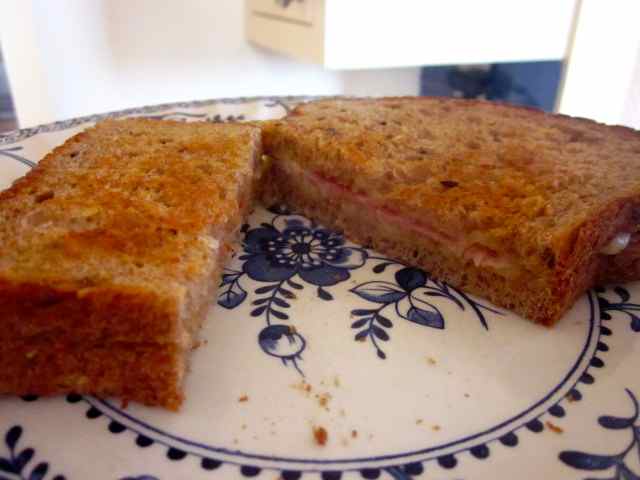 I was making lunch for Nina and Pinta yesterday, and our options were limited. At least that's what Nina thought. I had cooked up a batch of dhal, but that only satisfied Pinta. Her older sister wanted a grilled cheese, but we were short on cheddar, so that made things difficult. Santa Maria suggested using Parmesan, but I didn't think that would quite work.

Nina had a solution. "What about gruyère?" she said, "does that melt well?"

"Yes, it does," I said, remembering that we had a bit in the fridge.

"And can you make that sandwich with the ham and two pieces of bread?" she asked.

And so it was. We had Croques Monsieurs for lunch. Along with the dahl.

Sauté the ham until it is brown on each side.

While the ham is cooking, butter the bread on one side, and put it in a frying pan on low heat butter side up.

As soon as the bread is warm, but not toasted, flip it so the butter side is down.

Place cheese on each piece of bread, and put a slice (or more) of the ham on one side of the bread.

Flip one piece of bread so it makes a sandwich with the other, with the ham in the middle.

Toast on a low heat until the cheese is melted and the bread is toasted. Use a weight, such as a kettle, to compress the sanwich to speed things up.