Home Archives About
Don't Cry Over Spilled Milk Department
English-Muffin Pizzas, or I Can't Believe I Ate the Whole Thing 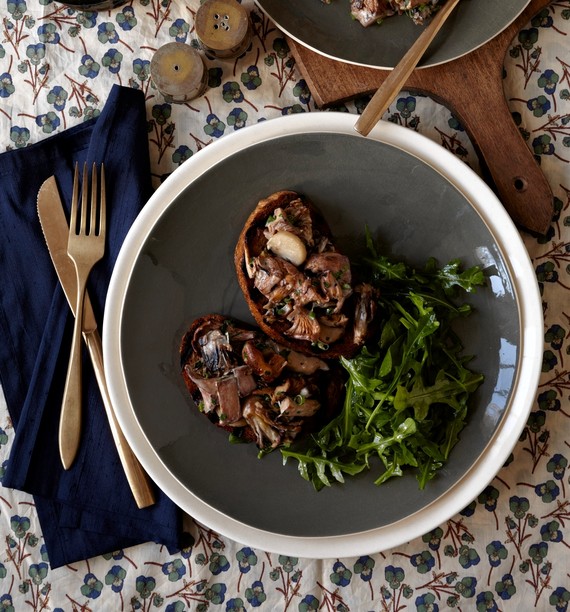 I was recently interviewed by Paul Kidwell, a public relations consultant and freelance writer, for an article about men and cooking on the Good Men Project website. It was a pleasure to hear from Kidwell, who lives in Boston with his wife and son, a nineteen-year-old sophomore at Boston College. Kidwell told me that “he thinks about food – its preparation and consumption – about every two seconds, and is happiest when in the kitchen making a meal for his family.”

Naturally, I wanted to hear more, and he was kind enough to send me a beautiful guest post. I like it for two reasons. One, I love mushrooms; and two, my kids are still very young, and I can only imagine what it will be like when they are in college. It kind of makes me misty-eyed, frankly, but I’ll stop. Here’s his guest post.

The emails started coming in early December; finding my In Box at the oddest hours of the morning. 2:17, 3:47, 4:12 was when my son, Songwen, who is a Boston College sophomore, decided to take a break from one of his many all-night study excursions in preparation for final exams and end-of-term papers to send me notes requesting that I make certain dishes during his semester break. The subject lines read like a menu from a restaurant specializing in warm, cozy comfort food asking for dishes such as lobster paella, beef stew, mushroom cassoulet, Tuscan white bean soup, and veal marsala.  I had to laugh when I thought of his classmates who were probably also sharing the same pre-dawn hours dreading upcoming tests of their own academic mettle, while my boy has visions of shimmering garlic, bubbling  stews, and simmering soups dance in his head. He is nothing if not my child when it comes to sharing my passion for cooking and eating good food; something I schooled him on at an early age.

And this Christmas he will not only enjoy eating the meals, but also join me in the kitchen in their preparation; a greater gift I cannot imagine.

For his first meal I am planning on making Pasta Alla Carbonara, Tuscan white bean soup, roasted asparagus and creamy mushroom bruschetta. The first three are classic dishes and everyone has their own recipe. The bruschetta is a recent find from a feature in the Wall Street Journal. It comes from April Bloomfield, chef/owner of New York’s Spotted Pig.

1. Set a large, heavy pan over medium heat. Add 3 tablespoons oil. Once very hot, add mushrooms and a pinch of salt. Sauté them, stirring from time to time, until browned and tender, about 6 minutes. Once mushrooms cook down, traces of their juices should streak the pan. If too dry, deglaze with splashes of water.

2. Stir in garlic, butter and parsley. Cook until garlic is golden, 3-4 minutes. Season to taste with salt. Remove pan from heat. Stir in crème fraîche and chives until evenly distributed.

3. Set another pan over medium-high heat. Once hot, add a slick of oil and lay in bread. Toast both sides until crisp and golden, 1-2 minutes per side.

4. Whisk together 2 tablespoons oil and lemon juice. Place arugula in large bowl and toss to lightly coat with dressing. Season with salt.