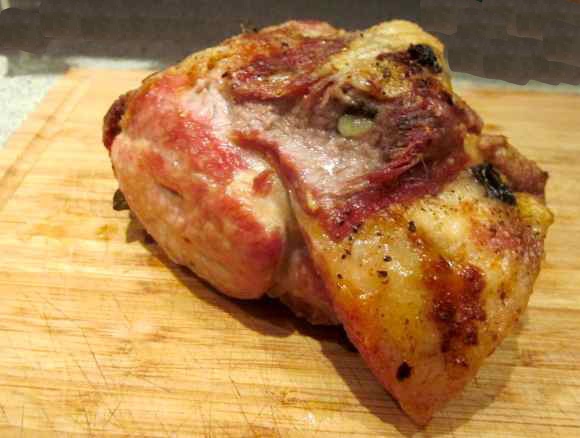 This morning, I jostled past my fellow commuters and climbed the subway stairs in Midtown. Coming up to the bright street, I caught sight of the sunlight on an office building’s marbled facade, and I was reminded of why I live in New York City.  I need to have people around. I love their energy and creativity. To me, the buildings of Manhattan are a physical manifestation of the human imagination.

On a smaller scale, I see cooking the same way. The meal is a creation of the imagination, and it brings people together. The other day, Santa Maria ran into an old friend in the neighborhood. She was having her kitchen renovated, so we made plans to have her over for dinner.

The night we got together, our friend, who is a literary agent, was coming from a meeting with one of her writers from out of town. That meeting ran late, and as happens with writers, there were some complications. The writer lives on a farm, and he had spent the day harvesting apples. He hadn’t eaten since that morning.  We took him in, and served him dinner.

I had planned on serving a pork roast, and it was large enough for an extra guest, even one who was hungry from laboring in the field all day. This pork roast is a great party dish, because it doesn’t require much active work. Once you put in the oven, all you need to do is keep an eye on it, and make sure the pan doesn’t dry out.

Pork chops are often served with applesauce, and this roast is based on that idea. I put the meat on top of slices of apples and pieces of sage, and as it roasts, the apples cook up nicely with the pan drippings and the herbs. The result is  not exactly applesauce, but it’s delicious. Just ask the apple farmer. He loved it.

Preheat the oven to 425 degrees

Slice the garlic into thick pieces, and with a pointy knife, stab a bunch of holes in the top and sides of the pork roast. Put the garlic slices along with bits of sage into the holes

Lay the apple slices on the bottom of a roasting pan (for a piece of meat this size, I use a small ceramic pan) in roughly the same area as the size of the pork roast

Lay a few sage leaves over and under the slices

Perch the pork roast on top of the apples. The apples should be under the meat. They can be stacked a few layers high. Just don't leave them in the pan uncovered by the meat.

Pour a bit of water in the pan so the bottom of it isn't dry.

Put the meat into the oven and roast for about 30-45 mintues. Make sure the pan doesn't dry out. You don't want anything to burn in the pan. Add more water as you go along, if necessary.

After about 30 to 45 minutes, turn the heat down to 350, and continue to roast until the meat is 150 degrees internal, about an hour to an hour-and-a-half total.

Let the meat sit for ten minutes before slicing and serving.

Gather the apples and sage in a bowl and serve on the side.