Home Archives About
Thanksgiving Planning Tips
Happy Thanksgiving: A How To Guide 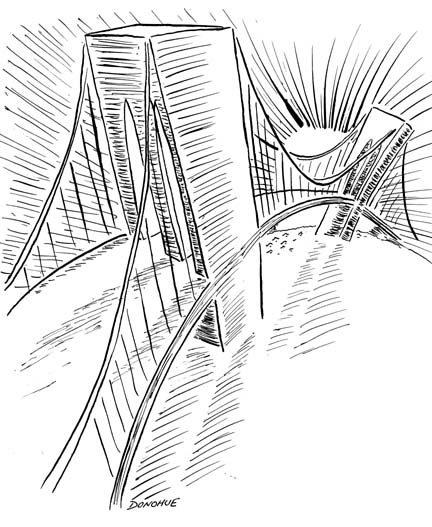 Once, when I was a boy, I wrote a report for school about the construction of the Brooklyn Bridge, and I’ve been fascinated by the span ever since. Now that I live in the borough, I’ve had many chances to cross it, and I still marvel at it. Just the other day, I had an opportunity to talk with Clifford W. Zink, an historian whose latest book, “The Roebling Legacy,” traces the history of the family that built the bridge.

“The Roebling Legacy” is a marvelous book, full of details about the family’s technological innovations and many pictures of their various accomplishments beyond the Borough of Kings. Clifford will be at the PowerHouse Arena, a bookstore near the bridge, on next Tuesday, November 29, at 7 p.m. to talk about his book.

In the meantime,  Clifford, who lives in New Jersey and who cooks for his wife and two teenage children, was kind enough to share his grandmother’s recipe for applesauce. It seems like just the kind of thing to make and serve for Thanksgiving, though it might be a bit late in the week to whip up a batch. In that case, it’s the kind of thing to occupy the weekend following the holiday, when everyone is still around and looking for something to do.

Grandma thoroughly spoiled my bother and I while we were growing up.  She had emigrated from Germany to Manhattan in 1906 at the age of 18, and went shopping every day for fresh foods.  Her soups, chicken paprikas, and wiener schnitzel were delicious all year round, but summers were special when she made her crepes with berries and her open-topped peach cake with a soft crust.  In the fall she woke us up for school with the aroma of her apple fritters frying on the stove, and after school her thin crust apple pies were beautiful to behold and scrumptious to eat.  When Mom asked her years later for her recipes, Grandma replied, "What recipes?  You just put in a little of this and a little of that, and you taste it and you know when it's right."

My kids love applesauce I make based on Grandma's, and the here's the first go at writing it down:

Start with a dozen or more fresh, uncoated apples, about 3/4s of them golden delicious and the rest slightly tart macintosh or winesap.  You can mix in other varieties but try to keep the 3-1 sweet-to-tart ratio.

Peel, core and cube the apples, and place them in a deep pot.  Add about 3/4 of an inch of fresh apple cider (a little more if you're using more apples), cover the pot and cook on low to medium heat.  Check every few minutes to make sure that the cider is lightly bubbling without boiling away.  If the cider gets too low, add just enough to keep about 3/4 of an inch in the bottom of the pot, and keep the pot covered.  After about 30 minutes or so, depending on the amount and mix of apples, crush the apple cubes repeatedly with a potato masher or similar instrument.  If the mix is a bit dry, you can add just a little cider.  Keep crushing until you get to a consistency you like, and then it's ready to eat, warm, plain, on ice cream or yogurt.  And eating it cold later on brings out other delicious flavors.

No sugar or honey, please, just taste the natural sweetness of the apples and cider.  I used to add some raisins, and a touch of cinnamon, and you can, too, but now I like to taste just the serendipitous sweetness of mixing different types of apples.  As Grandma said, "You know when it's right."