Taking a Break with a Home-Cooked Steak 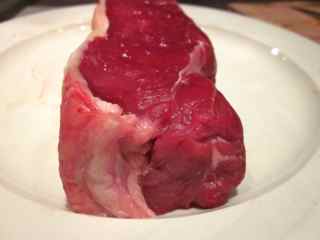 The back-to-school period has been more complicated than we expected (there have been issues with Pinta's school), and I've found it difficult to make the time to blog. With things so stressful, I thought it would be nice to cook Santa Maria something special.

Last night, for the first time in a long time, I cooked a steak at home. I took time out from my day to stop by Whole Foods, and pick up a prime piece of grass-fed New York Strip. Wilson, the man behind the counter, tutored me in how to cook it: Salt it, and let it rest on the counter for an hour before cooking; heat a cast-iron frying pan, and render the fat from the edge of the steak on the pan; char up one side nicely, then flip and turn down to medium heat for three-to-five minutes.

This sounded simple enough, but the steak was very thick and I ended up fliping it back and forth a few times before pulling it from the pan. Even at that point it wasn't done correctly, so I ended up cutting it in half and searing it one more time. Not the greatest outcome, but tasty none-the-less.

I accompanied it with mushroom risotto and sugar snap peas. This was not the kind of cooking I do every day, and it felt good to be standing at the stove with top-notch ingredients at the late hour of 9 p.m. We cracked open a bottle of wine and enjoyed our dinner. Then Santa Maria fell asleep on the couch, and I did the dishes.