Home Archives About
Taking a Break with a Home-Cooked Steak
Empyt-Nest Soup: A Guest Post 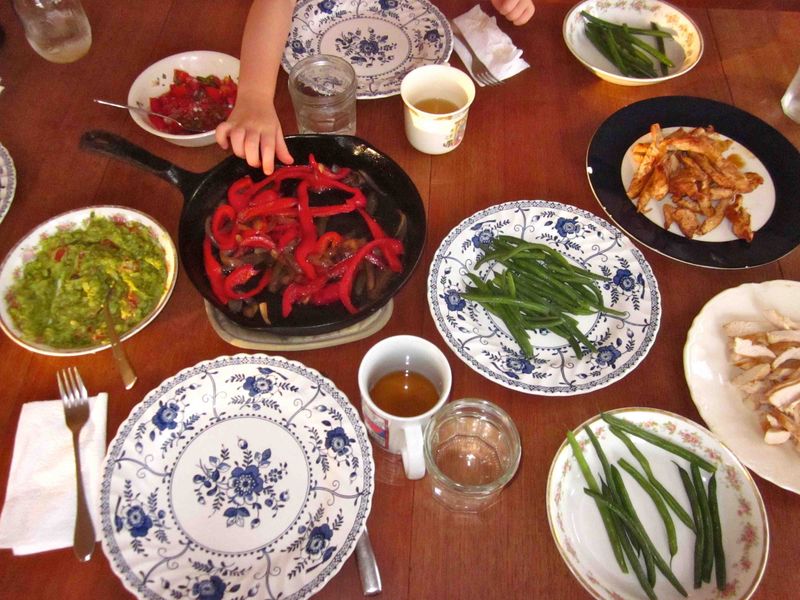 I keep this blog to assist other dads (and all folks) learn about cooking, and one nice thing about it is that it also helps me. Over the weekend we had a mad dash from a cousin’s birthday party to dinnertime, and I had a whole flounder to cook. I knew how to do it, but couldn’t remember the details. Luckily, I had blogged about it before, and dinner was ready in thirty minutes.

A few weeks ago, I made chicken fajitas for the first time, but I got too busy to blog about the dinner. Bummer. On Friday, I wanted to make the fajitas again, but I had to start thinking from scratch. Thinking is hard enough for me, so if I’ve done it once, I don’t like to have to do it again.

Of course, fajitas don’t require much thought at all, unless one heads to the web for suggestions. That’s where things get confusing. Food and Wine had a recipe for fajitas made with powdered onion and powdered garlic. Powdered onion? Powdered garlic? Really? Others required marinating the chicken for three hours. Some included soy sauce. Say what? Nothing, seemed right, so I decided to wing it.

I wasn’t sure how well seasoned chicken would go over with the girls, so in keeping with my philosophy of making one meal out of multiple parts that appeal to all, I decided to cook half the chicken in a simple fashion with a bit of lemon. The rest of the chicken I hit with a bit of chili powder, some Worcestershire sauce (another of the ideas from the Internet) and a touch of lime.

As I sautéed the seasoned chicken, Nina popped her head into the kitchen, and said, “I smell French fries.” I pointed to the chicken, and gave her a taste; she liked it. I caramelized slices of onion and sautéed slices of red pepper, and served everything with fresh guacamole, salsa, and warmed, soft corn tortillas. In the middle of eating, Pinta said, “How did you make this awesome dinner?” Nina replied that it wasn’t that awesome. “There are more awesome meals, like Bolognese,” she said.

If you want to season the chicken, cut the chicken breasts into strips and toss in a dish with the chili pepper, Worcestershire sauce, and, if you like, lime juice. Let this marinate while the peppers and onions cook down.

Saute the onions in one pan, until soft, and in a second pan, do the same with the peppers.

If you don't want to season the chicken, simply slice the breasts in half lenthwise (so they are thin) and saute them in a frying pan with a bit of oil over a high heat. While the first side cooks, squeeze a bit of lemon juice on the meat. After the first side is nicely browned, flip the breast and finish cooking through.

After the chicken has cooked through, slice it crosswise into strips.

The seasoned chicken strips can be sauteed next, in the same pan.

Warm the tortillas in a frying pan bring to the table with everything else. Serve by wrapping the chicken and onions and peppers and guacamole and salsa in a tortilla. Top with fresh cilantro.