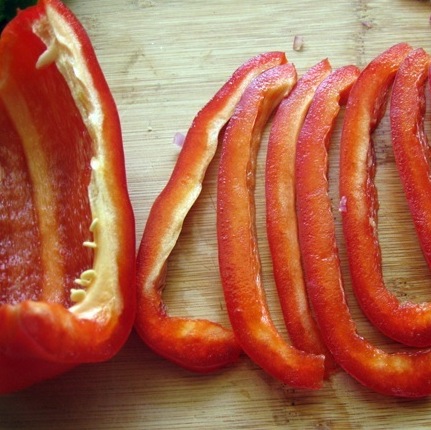 The conventional wisdom about getting kids to eat new things says that you should cook with them, and they will try what you are making. I've had mixed success (read, next to none) with this, but last night I was blown away.

Santa Maria was working late, and I was home after work with Nina and Pinta on my own. As usual, I was hungry and I wanted to rush dinner into the oven, so it would cook while I did the get-the-kids-into-bed Kabuki dance. My plan was to make my favorite Summer Chicken and Arugula Salad; by the time the chicken, potatoes, onions, and peppers were done roasting in the oven, the kids would be asleep and my dinner would be ready.

The girls wanted to help me in the kitchen, so I grabbed two chairs from the dining room, and they stood beside me as I chopped the vegetables. I started with the red pepper, which, according to The Worlds Healthiest Foods, is a remarkably beneficial vegetable, extremely high in vitamins A and C, and not-so-shabby with B-6, K, and other desirable nutrients. Also, red peppers then to be more healthy in their natural state; according to once study cited on The Worlds Healthiest Foods, the raw ones have higher levels of phytonutrients than cooked ones.

When Pinta saw the peppers on the cutting board, she said, "What's that?" I told her, and offered her some. She smelled it, smiled, and took a bite. She liked it. I gave some to her sister, who was a bit more skeptical, but who also tried it. They both liked it. I gave the girls more pieces, and Pinta put her her curved slice of pepper to her ear and said, "It looks like a phone!"