Home Archives About
Matzo Brei, My Matzo Brei, by Barry Strugatz
Take a Trip the South of France: A Quick Salad Niçoise Recipe

Good cooking, like good parenting, is all about serendipity. No one told me that. I discovered it by accident. On Saturday I wanted to go to the Greenmarket for seafood from Blue Moon Fish. They have the freshest offerings in the five boroughs, and I'm not the only one who knows that. They are very popular, so it wasn’t any surprise to me that by the time I got there, late in the day, they were sold out of most everything.

They had a few things I wanted, such as clams and mussels, but the key fillet of fluke was nowhere to be found. That’s the only thing Pinta will eat. Clams are too salty for her, and mussels too far off the charts.

I was waited on by my friend Sally Sturman, an illustrator who slings fish for Blue Moon on the side. She showed me a whole flounder, only ten dollars, and I decided to buy it. Even though I worked around fish for a decade, starting at the tender age of thirteen, I can count on one hand the number of whole fish I’ve roasted in my life. It’s something I feel like should know how to do, but haven’t done yet.

The whole flounder freaked me out a bit but Sally’s coworkers assured me that it was easy to cook. They were right. Twenty minutes in an oven at 450 degrees was all it took.

First though, I had to find a roasting pan big enough for it. The fish was fairly small, only about two and a half pounds or so, but it was bigger than all my roasting pans, save the one I use for chickens. 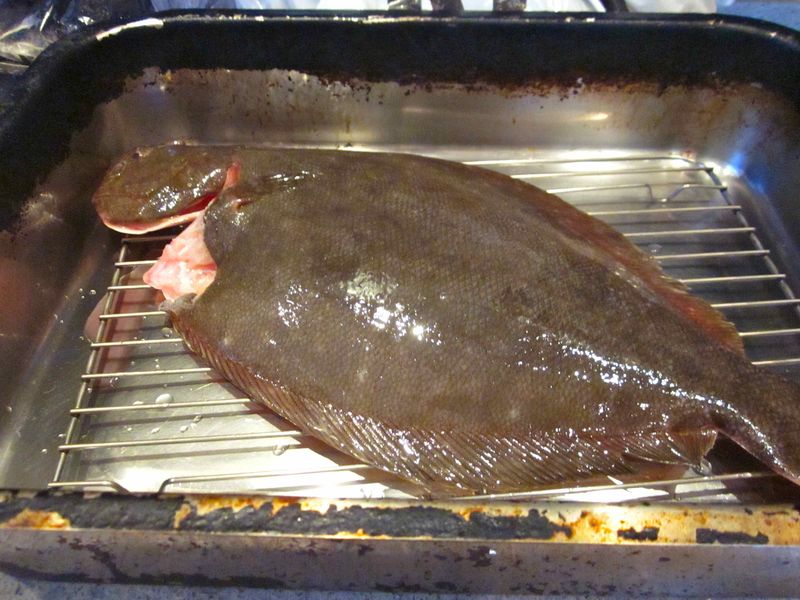 The fishmongers told me to put salt on it, but they didn’t say anything about a rack. I decided to put it on the rack I use for chicken. And I coated the back side of the fish with oil so it wouldn’t stick. I seasoned it with a bit of ginger, stuck in where it's guts were. (Oh, yes, I had to clean it, but that took about five minutes; see the note below).

Then it was into the oven for twenty minutes, and it was done. Not only was it easy to cook, it was disproportionally delicious. Santa Maria told me it was the best-tasting fish she’s ever had. It made her think, she said, of the fish she would be served on the beach of a Greek Island, fresh off the grill. 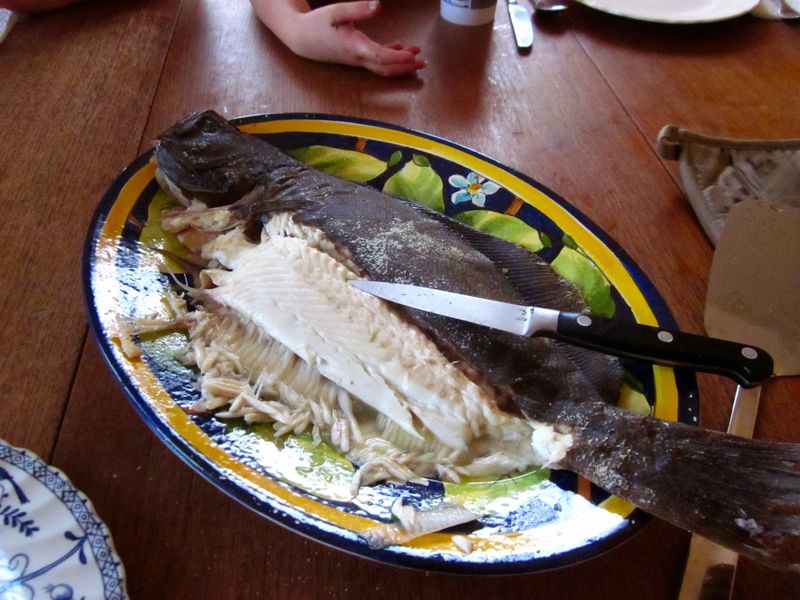 And I enjoyed showing the girls the bones. Rub the white side of the fish with olive oil, and place it white-side down on a rack in a roasting pan.

Stick the ginger slices in the belly.

Place in oven and roast for about twenty minutes, or until the flesh is opaque (check with a thin knife).

Remove and let sit on a platter for about ten minutes.

To serve, slice skin lengthwise and peel it back. Lift the fillet on one side of the back bone off, then the other. Then lift the backbone out and do the same with the flesh on the bottom. Don't neglect the bits of meat in the head and along the fins. They are delicious.

Note: To clean the fish, make a small cut below the base of the head, and reach in and rip out the guts. Then pull the rich red gills from the head. Rinse well.

Serves 2 to 4, depending on appetite and side dishes.