Home Archives About
How to Roast a Pig, Part One: La Caja China a.k.a. the Magic Box
James Taylor and a New Cutting Board Make Life Better

How to Roast a Pig: The Rest of the Story 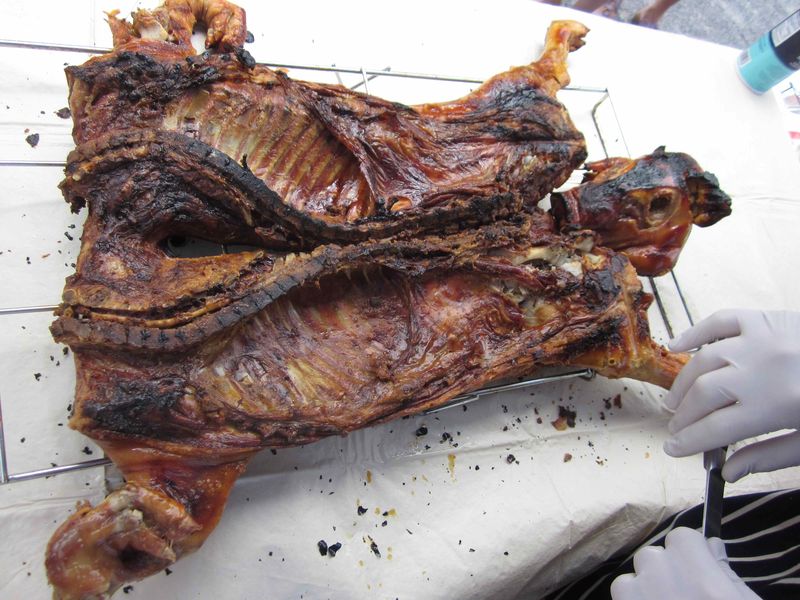 I started this website and put together “Man with a Pan: Culinary Adventures of Fathers Who Cook for Their Families” to breakdown gender stereotypes, and show the world there’s a new way for men and women to relate, especially around food.

But I recently proved the old adage that behind every successful man there’s a woman: Saturday’s New Farmer’s Charity Pig Roast couldn’t have happened without Santa Maria. She stepped in at the last minute to work the phones, send the emails, and make sure everything happened the way it was supposed to happen.

I’m much more of an idea man than a detail man, and her production skills made the event a success. Her efforts freed me to concentrate on the cooking, which began with assembling La Caja China. 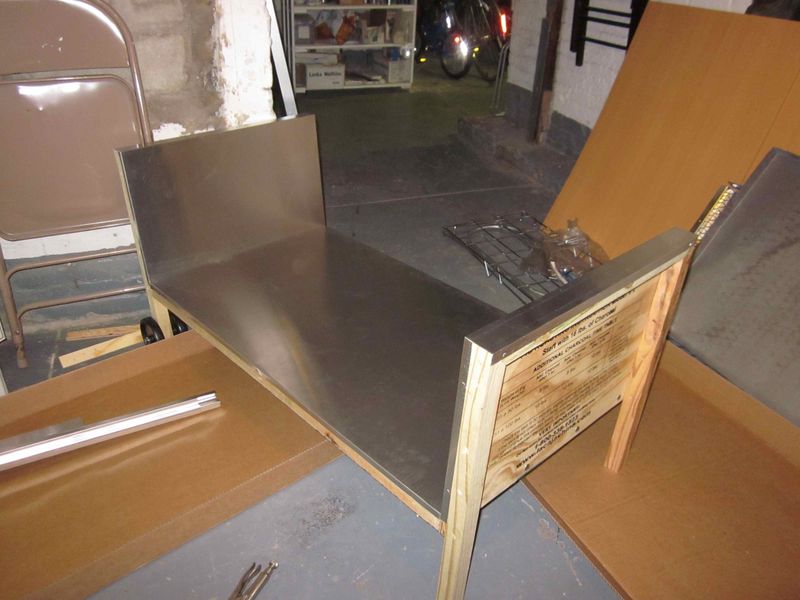 It arrived last week in two boxes, and I opened them in the basement of my building the night before the pig roast. It wasn’t hard to put together, but it took a little bit of time and a whole lot of concentration. Aside from chopping onions and peeling garlic, I don’t really work with my hands. It felt good to build something that I knew was going to make so many people happy.

After I put the box together, I ran over to Fairway Market, in Red Hook, to pick up plates, tortillas, ingredients for fresh salsa, and charcoal. In other words, everything but the pig itself. Fairway is an amazing market, and the folks there are very helpful. It was only my second time in the store (I’m a Park Slope Food Coop partisan), and I kept getting lost. The staff at Fairway kept pointing me in the right direction, and I found everything I needed. Their donation to the barbecue was instrumental in its success.

I left Fairway at about 10:00 and headed home to get some rest. I was up the next day at 5:30 a.m. to get the pig started. La Caja China cooks the pig fast, but it still takes at least four hours. If we wanted to eat midday, I would have to get that thing cooking first thing in the morning.

On La Caja China’s website there are recipes for marinades, brines, and other ways to prepare the pig for roasting (the unit ships with a giant hypodermic needle for injecting the marinade right into the flesh), but I was too tired to make anything.  A friend who had used La Caja China before and written about it at length had told me that if I had a small Greenmarket pig, and not a huge supermarket one, I would be fine with just some salt and pepper. So I skipped the marinade.

The pig was donated by Roaming Acres Farms, and it was small, a mere 50 lbs live (which worked out to about 35 lbs dressed), and we just salted it up the morning we wanted to cook it, and it was just fine.  If you start with good ingredients, you don’t have to do much to them to make a good meal.

When Santa Maria took over the production a day before the event, the first thing she did was get on the phone with Robert Guerra, the maker of La Caja China. She discovered that the pig needed to be 65 degrees before cooking, otherwise the four hours would turn into eight hours. The pig was being delivered that morning, and it’s probably against the law to travel with a pig at room temperature, but Lou the delivery man did a great job of getting there early and we left the pig out for the hour or so it took us to get things set up, and the temperature wasn’t an issue.

Here's how the rest of the morning, and the day, went: 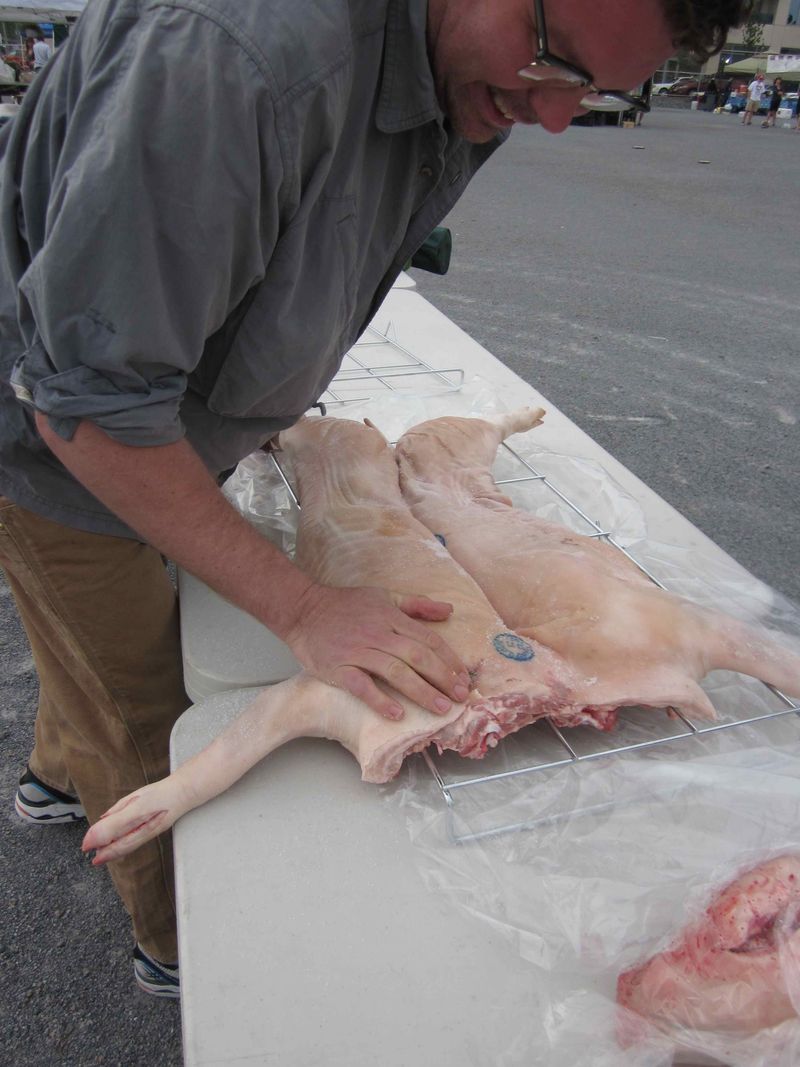 After Manny salted the pig up, we set it in the rack for La Caja China. 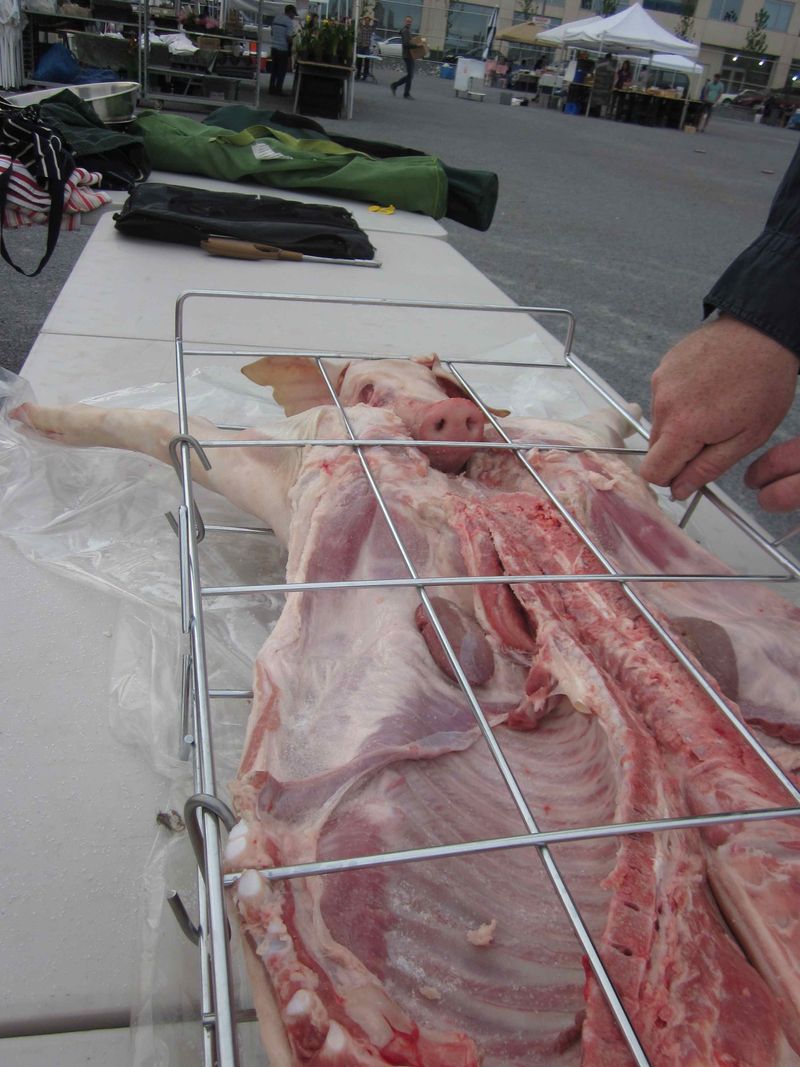 Then Josh and Manny lit the grill. 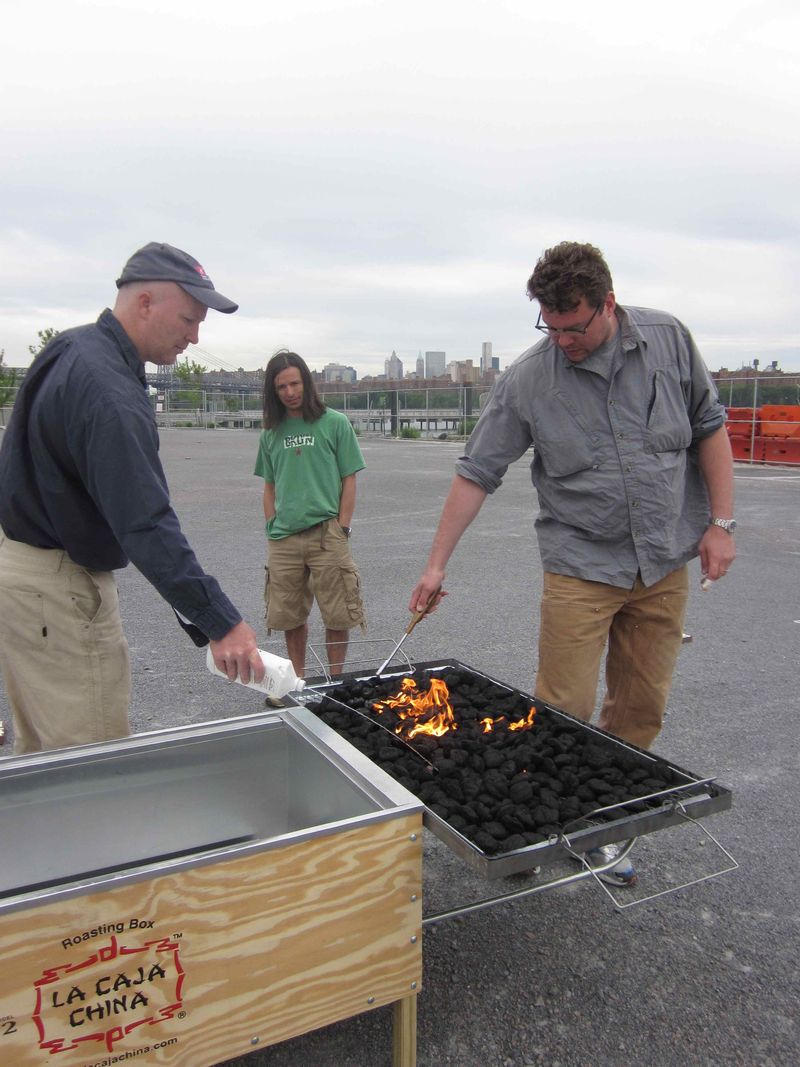 And Josh and I loaded the pig into the box. 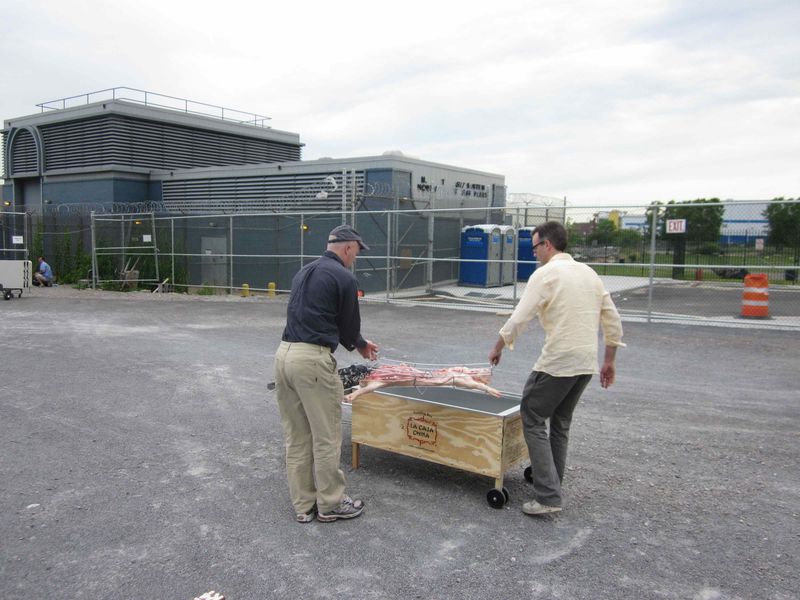 After that, we just kicked back and added charcoal ever hour per the instructions on the box, and waited. Three hours later we flipped the pig in the box, roasted it about a half hour more, and took it out.

We didn’t time that final roasting period exactly, and we almost paid a dear price. When I opened it up, the pig was burned. Its skin was a black as chimney sweeper’s hat. Disaster had struck!

We were momentarily stunned, but we came to our senses, flipped the pig over and put its sweetly browned side face up on the table. The crowd gathered and we furiously hacked at the pig with knives and pulled the succulent meat apart with our fingers. There was so much deliciously crispy skin, no one knew a thing. With the right pig and La Caja China, you pretty much can’t fail.