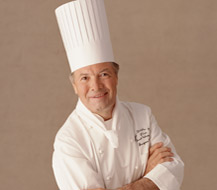 On Tuesday night, at the Museum of Arts & Design, Robert Rosenthal, aka the "Short Order Dad," brought together the great French chef Jacques Pépin, the wine-and-Internet wizard Gary Vaynerchuck, and the esteemed restaurateur Danny Meyer to talk about food, fatherhood, and their work. The occasion was a benefit for a pediatric charity and the conversation was fast paced and fascinating.

Pépin talked about starting his life in the kitchen of his mother's restaurant outside of Lyon during the Second World War. Vaynerchuck revealed the breakthrough moment behind the counter of his parents' liquor store that led to his turning the family business into a multimillion dollar empire. Meyer, who once almost became a lawyer, discussed transforming his dismay over taking the LSATs into opening the Union Square Café.

Towards the end of the evening, Pépin described a trip to visit the President last month. He was cooking crepes and otherwise entertaining and enlightening the crowd on the lawn during the White House's annual Easter Egg Roll. At one point during the day he was in the White House itself, and a Marine stopped him. "We have a situation here," he said to Pépin.

Suddenly, the doors locked and Pépin was told to stay where he was. A radioactive sensor had gone off, and the source of the questionable material had to be located. One member of the team asked Pépin and his group if anyone had had medical procedure recently.

Pépin spoke up. "I had a stress test," he said. An officer checked him with special detector and determined that was the source. "Whatever it is they gave me," Pépin said, "had set things off. They had been tracking my movements through the White House."

"The doctors told me it would be out of my system in a matter of hours. They had cautioned me not to kiss a pregnant lady, but this was three days later. The White House must have had very sensitive equipment."