Home Archives About
Starting with a Slow Cooker, Slowly
Slow Cooker Follow Up: It's all in the Art

After carrying “Slow Cooker Revolution” to Santa Maria’s parents' house with much anticipation, I made my first dish with it, a “Spicy Thai-Style Chicken Stew.”

Santa Maria picked the recipe because her folks love Thai food (at least the Chicken Cashew take-out they can get in Brooklyn), and our girls have a reasonable chance of eating anything with chicken and rice. For reasons that I’ll go into shortly, this not a recipe I would have chosen to make, but one looks askance at the contributions of one’s spouse at one’s peril. In other words, Santa Maria did the shopping—while I was sleeping, nonetheless—so I wasn’t going to take time from the family to go the store just so I could cook something else.

In my mind, the slow-cooker seems to be a device best suited for cheap and tough cuts of meat. The longer they are cooked, the better they taste. As Mike of Dad Cooks Dinner pointed out yesterday, “only to use it for food that should be cooked for a very long time. Chicken breasts? Overcooked. Pork shoulder? Perfect!” Thank you to all the readers who sent me comments yesterday.

The slow cooker may suggest a set it, and forget it approach, but the reality is a little different. Any big stew will require copious amounts of chopping, and that’s what I ended up doing. Santa Maria’s father might like new technologies, but his kitchen knives seem to be relics of the Paleozoic era. It took me an hour to chop six carrots and two onions.

Because I lacked experience with a slow cooker, and because I put my faith in the folks at America’s Test Kitchen, I tried to follow the recipe exactly. This was hard for me. I like to be involved in the process of cooking. Standing over the stove sauteing is very gratifying for me. Putting things in a bowl and then tossing them in a mysterious ceramic and steel cooker felt strange. I wondered if this is how novice cooks feel the first time they pick up a knife or spatula.

The recipe called for microwaving the vegetables before putting them in the slow cooker, which made no sense to me given that the vegetables were about to cook for four hours. Wouldn’t that be enough time to cook them? The book said something about the microwave making their flavors bloom, so I nuked the carrots, onions, jalepeno pepper, ginger, and garlic, as instructed.

Because of a slight communication snafu with Santa Maria, I started the recipe a bit late in the day, and in the end had to rely on a few tricks to get the dish done in time for dinner with the kids. Santa Maria’s father took note of the clock at 5 p.m., and turned the heat up to high. At 5:30, I opened the top and cut up the chicken into small pieces so it would cook faster. I noticed as I sliced into the breasts that they were moist and plump. It was as if I was poaching them in the cooker. Cutting them to pieces would dry them out a bit, but in the end that didn’t matter. Better to have the kids fed in time, than to make the perfect meal. It’s always that way as the Stay at Stove Dad.

I’m not sure if a slow cooker will be a permanent part of my kitchen equipment anytime soon. The jury is still out. I can’t say that I’ve given the device a fair trial.

The stew was delicious, though. I tweaked the recipe a bit, and would make further changes were I to make the recipe again. I cut down on the spicy peppers, cut out the sugar, and reduced the amount of tapioca. That’s the nice thing about cooking for yourself; you get to make it—more or less—the way you might want it.

Here’s a copy of the recipe from the book, which I think it is a great work of research and writing. 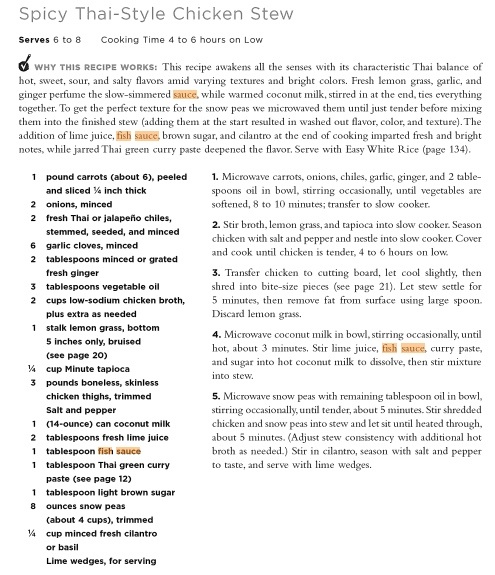