Home Archives About
Dessert Week Comes to a Close, With a Look Back
Created by Man: Leftovers

Monday Guest Post: An Ode to the Pot Roast 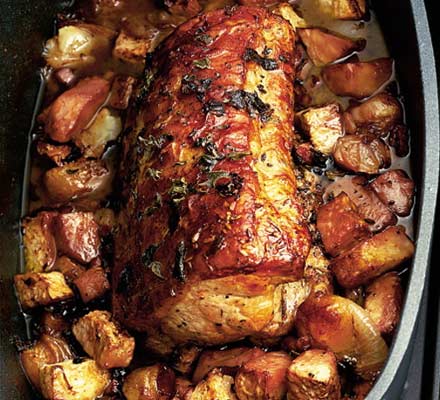 I was away for the past few days, with Nina, Pinta, and Santa Maria, at the Mohonk Moutain House, a sprawling and enchanting nineteenth-century resort perched atop the Shawangunk ridge, in upstate New York. We were enjoying a long-deferred weekend with my mother, and we spent the time skating, swimming, hiking, and eating insane amounts of food (their all-inclusive plan includes two appetizers, per person, with dinner!).

Last week, my friend John, a working dad from Brooklyn who happily cooks for his two rambunctious five-year-old girls and wife, and who has contributed to this site before (earlier this month, he wrote about simplifying his shopping list with an iPhone app), sent me his appreciation of the pot roast. I'm delighted to present it to you—My body is just too worn out from eating the Mohonk way.

I’m an Australian, but like much of the world, I grew up with American TV and one of the things that I remember from shows like “The Brady Bunch” were the jokes about pot roast. It was clear that pot roast was something to be avoided. Well, the cracks were wrong. It may take a little planning, but the pot roast is a tasty, tender, economical and just all-round awesome weekend meal that just keeps on giving.

Once you realize that pot roast is another form of braising, it all starts to come into focus. Get a cheap cut, such as a chuck roast or a shoulder roast. Something with a good amount of fat is perfect. Get a pot, the heavier the better (I use a Dutch oven, which I love but that’s the subject of another post). Heat some oil and brown the meat well on all sides. Add your braising liquid (the basic choice is stock but you’ve got plenty of options), and some celery, onions, and carrots if you want. Bring it to a gentle boil, turn down the heat, put the lid on, and let it be for three hours or so. Just check it once in a while to make sure you’ve got a nice simmer going and to turn the joint over.

The great thing about braising is that there’s plenty of margin and plenty of options. The only thing you really have to be careful about it to not let it boil for an extended period (the high temperature will toughen the meat up). Otherwise, you are free to play mad chef. You want to use some beer in the braise? Go ahead. Do you think red wine is more your speed? No problems! Don’t want onions in there? No sweat! And it also provides the perfect pretext for some serious sports watching. After all, you have to be in the house for three hours or so anyway, don’t you?

The classic pot roast calls for potatoes (mashed, boiled, scalloped—they’re all good), some vegetables (I’ve been obsessing about Brussels sprouts for the past few months). And of course gravy, which the pot roast makes super easy, thanks to the braising liquid. Gravy, of course, makes even the dreaded sprouts palatable for our twin girls Buk and Atete.

As an added bonus, if you’ve cooked up a decent sized joint of meat, you’ll probably have leftovers. These aren’t just your regular run of the mill leftovers either. These can be the basis of sandwiches or quick-as-a-flash dinners that make evening meals almost completely stress free.

Posted at 12:02 AM in Guest Posts, Then Dinner, Visiting Dads | Permalink | 0 comments