Home Archives About
What I Did For Valentine's Day: A Mushroom Risotto Recipe
Please Stand By: Working on an Exciting New Post 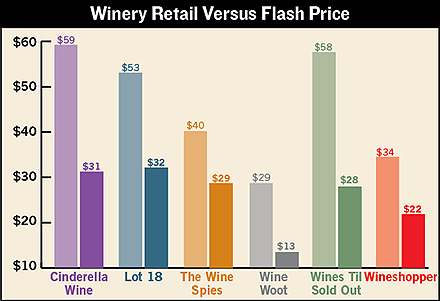 Deep down, I'm a hopeless romantic—I believe in marriage; I believe in a better future for my children; and I believe it's possible to save money buying wine. I've gone to great lengths to prove the last point. Once, in the time before the Internet, I attended an auction at a hotel on Madison Avenue with a friend, and we dashed across the street to Sherry-Lehmann during the bidding to consult one of Robert Parker's reference works. We came home happy that day.

I'm more likely these days to seek out a good low-priced wine by sticking to my local store and considering terroir. The French term for the effect land has on a given grape is also away to think economically. Broadly speaking the wines of Spain, Chile, and New Zealand are going to be less than those of France.

Now, I just discovered a new way to save on wine. In the past few years, in part because of the recession, wine producers have quietly turned to what are called flash websites to unload excess inventory. These sites "sell wines at deep discounts for short times have become the darlings of many wine lovers," according to the industry trade magazine Wines & Vines, which recently started tracking the sites. The top six, they say, are as follows:

I haven't tried any of these vendors, but the Wines & Vines article has details on the pros and cons of each site. Their appeal seems clear to me though: good deals on quality wines. Has anyone else tried them? I'm interested to hear about your experiences.