What I Did For Valentine's Day: A Mushroom Risotto Recipe 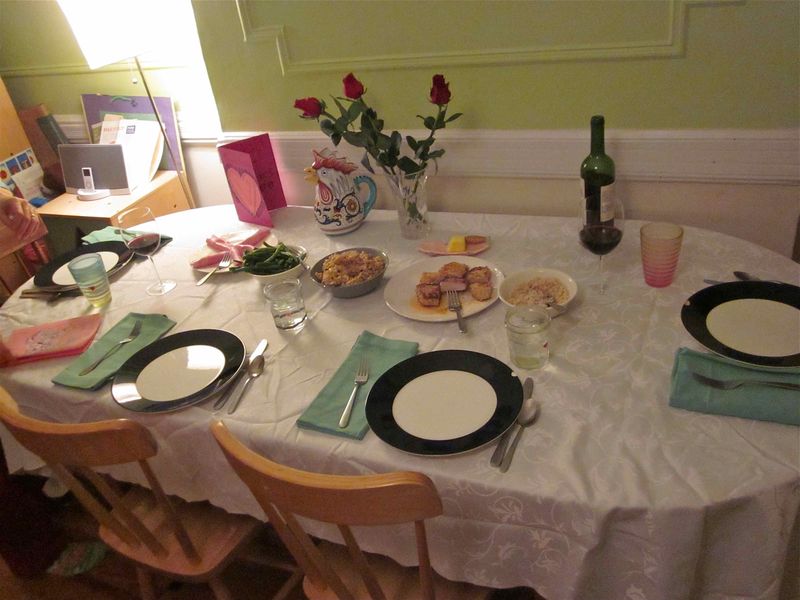 As I mentioned on Monday, I had plans for Valentine's Day, and now I can share them. We are T-minus ten-days from moving and our house is in a higher state of disorder than usual, so I'm rather proud of my modest accomplishments. I came home from work a little early, and cooked up pork chops, porcini risotto, and green beans. I purchased fresh flowers and a bottle of Los Vascos, and I put down a tablecloth and cloth napkins.

While I was setting the table, a clever detail from my friend Jon Michaud's forthcoming novel, "When Tito Loved Clara," about a Dominican-American love triangle, came to my mind. In his book, Tito, a second-generation immigrant, becomes ashamed of the mismatched flatware in his parents' house. I couldn't find napkins that matched (I also have no idea how many different sets of knives, forks, and spoons are actually circulating in my household at present, and I have a proclivity for turning random jam jars into drinking glasses) so I wondered if my girls would notice this and someday think it strange. I doubted it, but the power of parental anxiety is boundless.

The truth is that I didn't have much time to dwell on it. I was running between the dining room and the kitchen setting the table and stirring the risotto. The clock was ticking; in a matter of minutes, I expected Santa Maria and the girls to come barrelling into the apartment, hungry.

I was confident that the flowers, wine glasses, tablecloth, and cloth napkins would elevate the meal to a special status, but I wanted to reach higher. Even though I was planning a family dinner, I wanted it to be romantic. Nothing kills the mood like whining, and I needed to make sure that the girls would eat without complaint.

My choice to serve pork chops and risotto was a red flag. Nina and Pinta may like green beans, but they are not exactly fans of pork chops and mushroom risotto (the former they probably would have tolerated, but the latter, they've informed, me they absolutely do not like). I considered making them something else, but I didn't want to sacrifice my principles for romance (I did that enough when I was young, and the results were never pretty). I don't believe in making separate food for the children.

So I compromised. I put out rolls of ham and a bowl of plain rice (which I had leftover in the fridge), reasoning that ham and pork come from the same animal, and rice and risotto are the same thing.

The meal was a great fun. We've taken to serving food family style, which allows children to decide how much and what they want to eat. The girls downed the ham and plain rice and took great pleasure in serving themselves. Santa Maria and I enjoyed our sage-and-cornmeal crusted pork chops and porcini risotto. It was just perfect, mismatched napkins, flatware, glasses, and all.

In a small sauce pan put enough white wine to cover the mushrooms and bring to a boil.

Once the wine comes to a boil, dump the mushrooms into the pot, cover, and turn off the heat. Let the mushrooms steep for about ten minutes or so while you prepare the rest of the risotto.

In a heavy-bottomed stock pot on a medium-high flame, heat a bit of oil and butter and saute the onion until it is soft.

Once the onion is soft and translucent, toss the rice into the pan and stir until the grains are coated with oil.

Pour about 1/4 cup of white wine into the pot and leave on a high heat until it boils off.

Turn the heat down to medium and spoon a ladle full of stock in with the rice and cook, stirring occasionally, until the stock is absorbed. Repeat.

Remove the mushrooms from the wine, chop them, and add them to the rice.

Repeat ladling in the stock until the rice is cooked, about twenty minutes. It should be tender but firm inside.

Note: I used to make this with red wine and I used to strain the liquid from the mushrooms and add it to the risotto, but I found that it made it too rich. You might feel differently.