Getting Ready To Move: A Green-Olive Beef Tagine Recipe 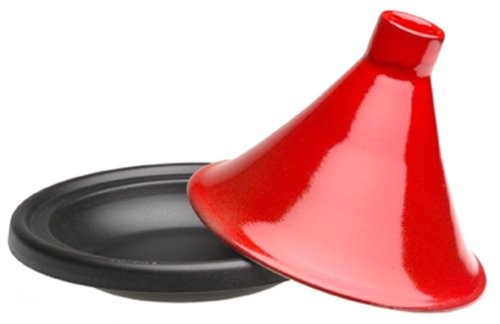 I’m packing to move, which means that in addition to sorting through books and clothes, selling a couple of filing cabinets, and practically giving away my beloved drafting table, I’ve been eating my way through the freezer. This has resulted in my getting reacquainted with an old favorite of mine, a green olive beef tagine.

We used to eat this tagine frequently, but it’s been a long time since I last made it. Nina used to love it, but I don’t think Pinta has ever tasted it. It’s been that long. I had in the freezer two Ziploc bags full of stew beef that I had cut into one-inch cubes expressly for use in this dish. Rather than cart the Ziploc bags with me to the new place, I took them out to make the tagine.

I had enough meat for a double recipe, so I made one version in the traditional tagine, and I made the second version in my Le Creuset Dutch oven. A tagine is basically a braise, so I figured if I increased the liquid in the Dutch oven I’d get the same result as using a tagine itself.

The tagine looks exotic and is very interesting object. Traditionally, the Moroccan cookware was made entirely of clay, and it has a low flat base and a cone-shaped top with a knob on it. The tagine was designed for the dessert. With a very low flame (using only a moderate amount of firewood) and with very little added liquid (the cone-shaped top condenses and collects all the vapors that get cooked out of any vegetable or meat in the dish; it makes its own sauce), a very cheap cut of meat could be made tender and delicious. The only thing absolutely necessary is time—it takes a good two or three hours for the whole effect to come together.

My tagine, which was made by Le Creuset, has a cast-iron base and can be used on the stove top. They are easy to buy on line and fun to have around the house.

I took the meat out of the freezer a few weeks ago on a Sunday, with the foolish idea that I could defrost it and start cooking the next morning. Santa Maria is usually home on Mondays, so it could simmer while I went off to work. Well, one thing led to another, and it wasn’t until Thursday that I got around to marinating the meat. I wasn’t sure that the beef would still be okay to eat, then I remembered that steakhouses will age beef for weeks before cooking it.

Also, I figured, I was going to cook it for three hours, so it certainly be safe to eat. I marinated it for the next two days, then cooked the tagine on Saturday. I let it sit for a night before serving it at an impromptu little dinner party. The double recipe was more than enough for six. Two old friends and their son came over for dinner, and we toasted what we expect to be one of their last meals at our old apartment. The beef was particularly tender.

Trim the beef and cut into 1-inch pieces. Mix together the five spices with the garlic, two tablespoons of olive oil and the tomato puree. Turn the beef in this mixture and leave, covered, in the refrigerator overnight (or longer).

Heat the remaining oil in the tagine base. Fry the shallots, potatoes and carrots until they begin to colour, lift out.

Fry the marinated beef until sealed on all sides. Return the vegetables with the chopped tomatoes any remaining marinade, the parsley and a little salt.

Cover and cook over a low heat for 3-4 hours, or until the beef is tender.

Stir the olives into the dish and allow 15 minutes to heat through.

Note: The recipe can be doubled. To make it in the Dutch oven, I added some wine. I figured it couldn't hurt things.