Home Archives About
The Only Thing We Have to Fear Is Fear Itself: A Wild Boar and Lentil Stew Recipe
Day Off 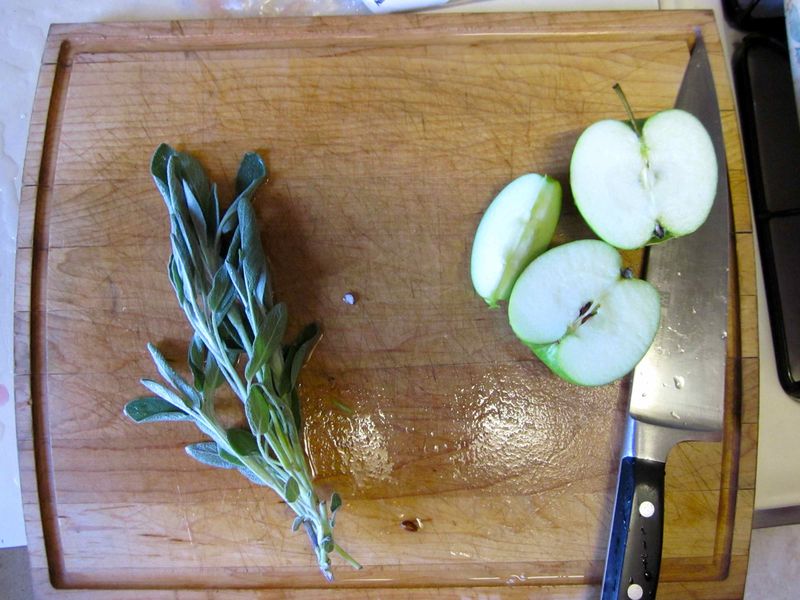 After finishing the weekly shop on Sunday and recycling a boatload of obsolete computers, stereo equipment, and old cell phones, we spent much of the day in the park sledding. The sky was blue, the wind was mellow, and the snow was hard and fast. It didn't seem like the day could get much better, but it did.

When we returned to the house, Nina reclined on a couch, Pinta took her nap, and Santa Maria wrote in her journal and dozed off. I collapsed in my street clothes on top of my bed and slept for an hour and a half. When I woke, I started dinner, and turned on the New York Jets  game.

Last week, I made wild boar and lentil stew because the Park Slope Food Coop, where I do my weekly shopping, was out of the cut of pork that I wanted. I had better luck this weekend.

I dressed the meat with fresh sage and garlic, and, because pork is often served with applesauce, I roasted it on a bed of sliced apples. When the roast cooked, the apples baked in the dripping fat, and they made a delicious accompaniment to the meat. They were almost as as rich as the Jets' victory over the Patriots yesterday evening. Almost.

Pork Roast with Sage and Apples (a.k.a. the Rex Ryan Special)

In the center of a shallow baking dish, lay the apple slices in a close layer to form a bed for the meat.

With a sharp-pointed knife, make a narrow slit in the exterior of the pork. With the knife blade, poke a sage leaf and/or a slice of garlic into the flesh. Repeat, as often as you feel like, as across the top, sides, and bottom of the roast.

Lay the remaining sage leaves on top of the bed of apples.

Place the roast on the apples, with the side with the most fat on the top.

Sprinkle it with a little salt and pepper.

Roast in the oven for about a half hour.

Turn the heat down to 350 degrees and continue to roast until the internal temperature of the meat is about 150 degrees; about an hour or two, depending on the size of the roast.

Serve by slicing the meat and accompanying it with a few of the baked apple bits.