The Only Thing We Have to Fear Is Fear Itself: A Wild Boar and Lentil Stew Recipe 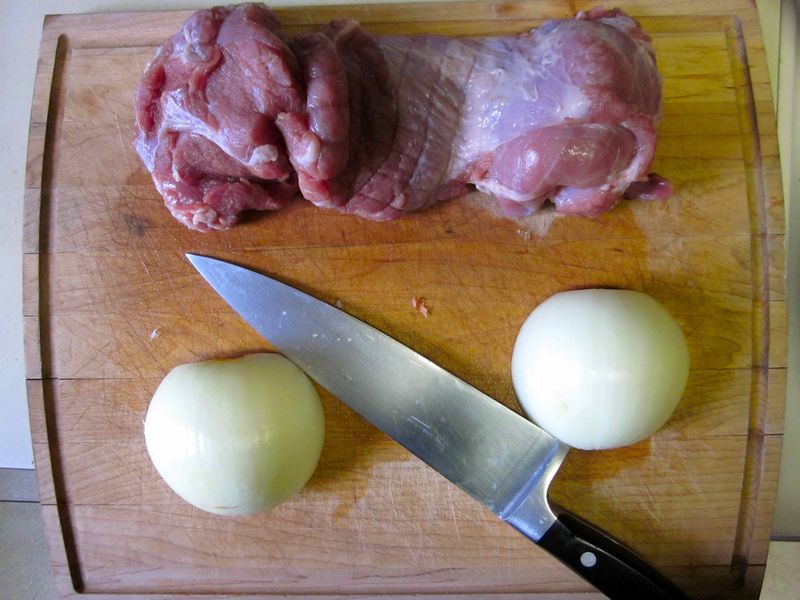 I was thinking of Julia Child recently, and a quote of hers came to mind after my weekly shopping trip last Saturday. I had set out to buy a cut of pork to roast (I like to make it with sage and slices of apple), but the Park Slope Food Coop didn’t have any meat in stock that would work. The closest thing I could find was a D'Artagnan “Wild Boar Mini Roast.”

The label said “Meat from Feral Swine,” which gave me pause, but the cut looked and felt like something I could roast my favorite way. When I got home and opened the package, I discovered that I was mistaken. I was faced with a sinewy mass of dark flesh that made me think of the quote by Child, “The only real stumbling block is fear of failure. In cooking you've got to have a 'What the hell?' attitude.”

I dashed to the computer to learn more about what I had purchased. Santa Maria was in the other room, completely unaware that my plans for dinner had just fallen off a cliff. I had no idea what to do with the hunk of meat, and I didn’t want her to know. The eye-roll she gave me in the coop when I put in our cart was more than enough for me.

The first place I looked was the D’Artagnan website. It should have been able to tell me how to cook it, but the website was down. Server error is all it said. I continued to Google “wild boar” and “recipe” at a furious pace, but the more I read, the more concerned I became. “Tough,” “dry,” and “failure” were words that kept coming up.

I took a break from the computer and looked in Marcella Hazan’s “Essentials of  Classic Italian Cooking.” It had a recipe for pork braised in wine, which sounded intriguing. Braising the meat was a good idea. Cook anything long enough, and it will become tender.

But braising the meat in wine sounded boring, so I returned to the wilds of the Internet. Somewhere during my panicked searching I picked up the idea that I could cook it like a lamb shank. I found a promising recipe, “Molly Stevens' Lamb Shanks Braised with Lentils & Curry,” and decided to improvise.

I came up with a mouthwatering and delicious meal. The meat was so tender it melted in my mouth. The rich taste of the boar was balanced by the earthy flavor of the lentils. Santa Maria improved it vastly by suggesting a bit of lemon zest at the end.

My girls didn’t enjoy it as much as we did. In fact they didn’t eat it at all. Only the promise of dessert—an organic-vanilla-bean flan that they had made with their mother earlier in the day—induced Nina to try it. More on what happened with them at the table, and how that flan turned out next week. In the meantime, here’s my experimental recipe. Don’t be afraid.

Rinse the lentils and cook them in 2 cups or so of water, until they are tender; about twenty minutes.

In a Le Creuset or other heavy-bottomed casserole, using one tablespoon or so of the olive oil, brown the boar (which I sliced into three large chunks; consider that you want the meat to eventually be entirely submerged in the braising liquid, and that the more surface area you have for browning, the richer the flavor will be).

Once the meat is browned, remove it and set it aside in a bowl. Pour off all but a bit of the boar fat (there may be nothing to pour off; my cut was very lean), and use the rest of the olive oil to sauté the onions, carrots, and celery until the onions are soft; at least 15 minutes.

Add the garlic and cook for another minute or so.

Add the garam masala and cook one more minute.

Add the tomatoes, stock, thyme, and bay leaf and bring to a boil. Scrape the bottom of the pot, to make sure nothing is sticking.

Return the meat to the pot, add the wine, reduce to the barest of simmers, cover the pan with foil and its lid, and simmer for at least two hours. Check it occasionally and turn the meat over.

If you would like, reduce the sauce at the end.

Add the lemon zest to finish.

Serve in a bowl with a bit of lentils and rice, some of the meat, and a huge helping of the sauce.

Note: Even after the meat is gone, the leftover lentils and rice and sauce make a great lunch.