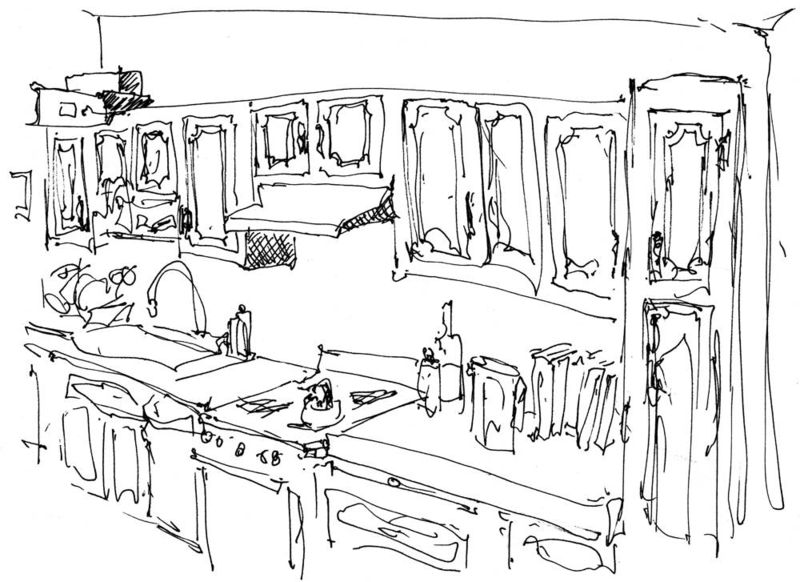 Long before I was married, I had a dream of what my domestic life would eventually look like. I saw a place where a large pot of something—a stew, a soup, a sauce—was always simmering on the stove. I’ve started to realize that vision, slowly.

When Pinta was very young, she had the charming habit of waking at about 5:00, and not going back to sleep. I would let Santa Maria stay in bed, and I would get up to take care of her. There was much I didn’t enjoy about this period of my life, but rising at that early hour gave me time to cook, which I liked.

These days, I’m better rested (we’re all better rested), but I have to scramble to get my cooking done. Lately, I’ve been making that big magical pot of food on the weekends.

One Saturday earlier this month, I made my dhal. Last Saturday, I made another old favorite, a Turkish lentil soup from the “Sundays at Moosewood Restaurant” cookbook. This lentil soup is different from any other that I’ve ever tasted. It is made with bulgur wheat, which releases a sweet and divine aroma when it is browned in the pan. Adding bulgur to the lentils makes for a complete protein, so the soup is very filling. It is seasoned with rosemary, and I just love it. Finished with fresh spinach, it really is a complete meal.

My girls, on the other hand, don’t care for it. They prefer Progresso’s canned lentil soup. They haven’t been reacting well to what I’ve been serving lately, but it won’t stop me from making good food for them. I tried using an immersion blender to puree the soup and its onions, but I wouldn’t suggest that. It made the soup look ugly and taste a bit weird. Pinta wasn’t fooled, and she chose not to eat any. She went hungry. Nina ate a bit (the blended version didn’t taste that bad), but she wasn’t really keen on it.

Earlier, when the soup was simmering, I took down a can of the Progresso soup and read the label to Nina. It’s a very healthy soup (aside from any BPA concerns), but I was surprised to read that sugar is among its ingredients. I shouldn’t have been. Many commercial foods cheat with a bit of sugar to hook the consumer. When I gave Nina my Turkish lentil soup, she tasted it and said, “It needs sugar, dad.” Believe, me, it doesn’t.

Rinse the lentils and bring them to a boil in the salted water or stock. Reduce heat to a simmer and cook, covered, for about forty minutes.

While the lentils are cooking, heat the olive oil in a heavy soup pot and saute the onions until they are translucent.

Add the garlic, cayenne, bay leaves, and bulgur. Stir, until the onions and bulgur are lightly browned.

Mix in the tomatoes and parsley.

Pour the cooked lentils into the pot.

Add the tomato paste and rosemary.

Simmer for another 15 minutes or so; until the lentils are tender. If the soup looks too dry, add some boiling water or hot stock.

Remove the bay leaves and serve, stirring the fresh spinach into the soup (I do this in each serving bowl) until it wilts. Garnish with more parsley, if you would like.