Over the past few days, Pinta has been calling out at dark and odd hours, “My tummy hurts, my tummy hurts.” To any parent, but especially to an urban one, the cry of a sick child is like the car alarm from hell. It cuts right to the heart, and pulls you out of the deepest sleep. Immediately.

Santa Maria has been taking the bulk of the night shifts dealing with Pinta’s malady. She also took her to the doctor (thankfully, it’s not appendicitis), and stayed home yesterday to take care of her. I left my office early to relieve Santa Maria, and as a result I had a lot of work to catch up on last night, and I didn’t have time to write a proper post for today.

Fortunately, Mark Bittman has given me a nice follow up to yesterday’s item about his disappearing “Oven Grilled” ribs recipe. It may not be in the revised edition of  his culinary bible, “ How to Cook Everything,” but two years ago he published an improved short-rib recipe in his Minimalist column.

Bittman recently ceased writing that column, and as a part of his outgoing salvo, he had a video producer named Gabe Johnson, who shot all the videos that ran with the column, talk about his favorite dish. Johnson chose the short ribs, which are cooked in a strange but apparently irresistible combination of wine, coffee, and chipotles.

“I was a little incredulous about the concoction in which they were to be braised,” Johnson wrote, “but Mark just kept saying how good they were going to be. I knew enough to take his word.”

To which, based on my experience with Bittman’s recipes, I would have to say, “I second that.” Click on the image below for his video and a link to the recipe. 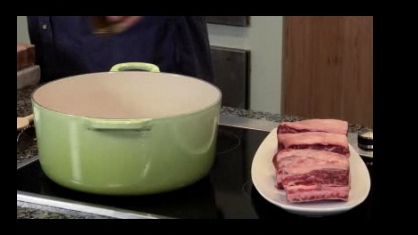