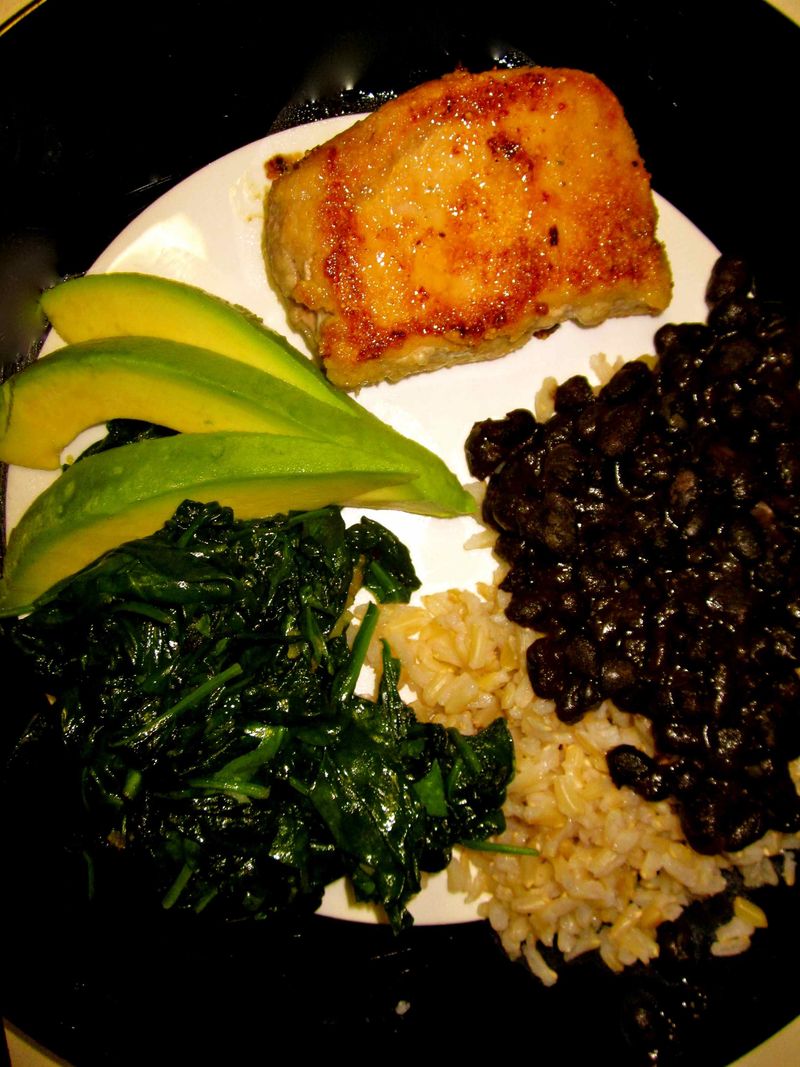 Occasionally, when I arrive home from work and need to get dinner on the table, I feel like I'm trying to defuse a bomb—if I don't work fast enough and carefully enough, someone is going to get burned.

The other night, I cruised into the apartment just in time to kick off my boots, hang up my coat, and chill with Nina, Pinta and Santa Maria for a few minutes before starting the teeth-brushing, face-washing, book-reading bedtime routine.

We had the girls in bed by 8:10, which meant I was free to head to the kitchen and cook. Santa Maria was hungry and tired, and she wasn't quite finished with the sandman dance. As the girls took a second curtain call, each asking for a glass of water, I could see that she was reaching the end of her fuse.

I was ready, though. I had black beans and rice to heat up, spinach to quickly steam, and an avocado to slice. I wanted to serve it all with a nice little pork chop, because no matter how hard I might try, I can't make it through the day without eating some meat.

Pork chops may be one of the oldest things in the book, but they have always vexed me. I would often burn the outside and dry out the interior. This time, I took it slow, and I covered them as I cooked them gently in a cast-iron pan. Once I had one side browned, I flipped them and turned the heat down low. The second side didn't brown right away, but I figured that was okay. As soon as the interior was up to about 140 degress (an instant-read meat thermometer is an inexperienced chef's best friend), I turned up the heat and made sure both sides were brown.

They were delicious, and dinner was on the table in twenty-minutes. No one got burned.

Before I give the recipe, I want to mention the Cowboy Junkies because they are masters of doing old things new ways. Perhaps best known for their irresistible, down-tempo cover of the Velvet Underground's "Sweet Jane," from the late eighties, the Toronto-based group is back with a new album, "Demons," a tribute to the late Georgia singer-songwriter Vic Chesnutt. It's not due out for another two weeks, but here's a chance to listen in advance. Enjoy.

Simple Weeknight Pork Chops
On a plate, combine the cornmeal with salt and pepper, and dredge the meat in the mixture until it is coated on each side.
Heat a cast-iron frying pan and add a bit of olive or other vegetable oil.
Fry the meat on one side, with the pan covered until it is brown, about three or four minutes.
Flip the meat, cover, and turn the heat down low.
Watch the meat and cook until it is 140 degrees inside.
Take the cover off, turn up the heat and brown to your liking.
Let rest a few minutes before serving.