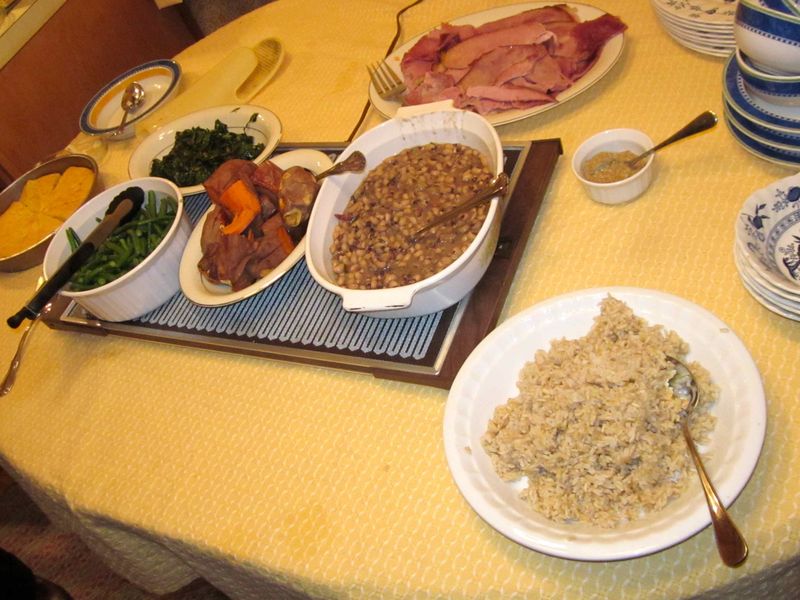 According to Southern tradition, eating a Hoppin’ John on New Year’s Day brings good luck, so I made one on Saturday. I’ve lived enough of a charmed life to never really know an annus horrribilis (aside from, perhaps, 7th Grade), but last year comes close to qualifying.

It started in January with a “Notice of Termination,” a thirty-day legal-order to vacate our apartment, or face eviction. This was followed by months of anxiety, and a mad scramble to find a new place. Just about every weekend was taken up with house hunting. A great lawyer and the generosity of the New York City Housing Court gave us some breathing room, but we didn’t reach a settlement until the middle of the year.

Looking for a home was a nightmare. I could fill a book with stories about termites, double-dealing realtors, bidding wars, and heartbreaking legal advice. And, speaking of books, in the midst of this never-ending quest, I was keeping a frantic pace editing the manuscript for “Man with a Pan,” my forthcoming anthology about fathers who cook, featuring contributions from the likes of Mario Batali, Mark Bittman, Mark Kurlansky, and Stephen King. More than once this past spring I dashed from my full-time job (at lunch hour) to visit a prospective school for Nina and Pinta, and spent the subway trip with a red pencil and an essay.

Finally, this summer and fall, my mother-in-law fell while visiting not once, but twice, breaking her nose on one occasion and shattering her shoulder on another. The search for a home, the constant need to work two jobs, and the health issues of my mother-in-law put an enormous strain on our family. It’s been hard.

But now the book is more-or-less finished, we’re about to move, and Santa Maria’s mother is on the mend. Things are looking up, and to help give them a boost, I made that Hoppin’ John for my mother, my sisters and their spouses and kids, and two of my maternal aunts.

I’m an ignorant suburban boy when it comes to Southern food (as my previous posts attest), but I don’t believe in living in fear. So what, if I’ve never made Southern food before? I figured I could wing it. I turned to Mark Bittman’s “How to Cook Everything” (the iPod app) and combined it with a little bit of what Abe de la Houssaye so generously shared, and used some common sense.

The Hoppin’ John was sublime. The black-eyed peas were smoother and more tender than I ever could have expected, and Bittman’s suggestion to season it with fresh rosemary gave it a nice tingle. I forgot to serve the dish with Tabasco sauce, but no one complained. My family’s of Irish descent (with the exception of my brother-in-laws, one of whom is from Texas), so they have even less experience with Southern food than I do. They all loved it. I accompanied it with slices of baked Amish ham, steamed green beans, sweet potatoes, cornbread, and collard greens.

I’ve always hated collard greens so I cooked them my way. I’m sure a Southerner would find it heretical, but my sister who is married to the Texan said they were the best she’d ever had. Y'all come back tomorrow to hear how I did those.

One Northerner's Take on the Traditional Hoppin' John

In a large stockpot render the bacon and saute the onions until they are translucent.

Add the garlic and cook for three or four minutes more.

Toss in the peas and the ham hock and the stock and rosemary.

Add enough water to cover the beans and ham hock.

Bring to a boil and reduce to a simmer.

Cook for a couple of hours, or until the peas are tender.

Notes: I forgot to soak the peas overnight, and only soaked them for about two hours before cooking. I used turkey stock because that's what my mother had on hand. The amount is a guess. Use as much as you'd like. I don't really know how long I cooked them for because I took Nina and Pinta sledding while they were cooking. If you leave yourself enough time, you really can't go wrong with this dish.