Home Archives About
The Difficulty of Organizing a Family Dinner
Cooking Dinner for Julia Child: A Steak Diane Recipe 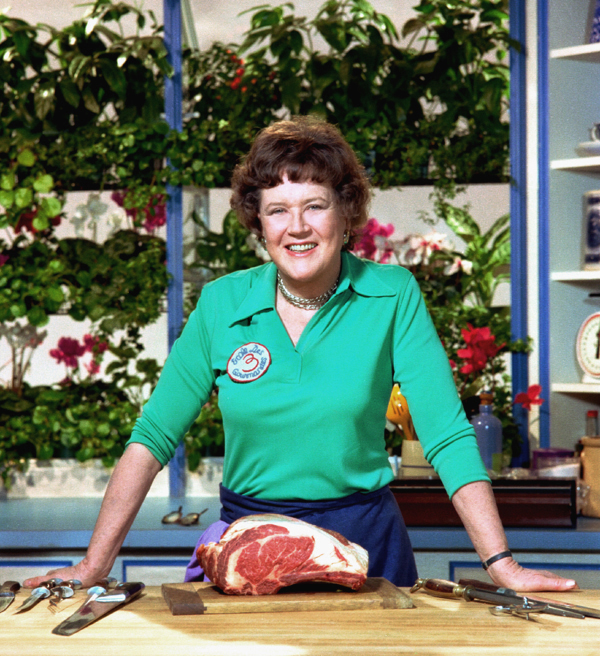 One of the pleasures of writing this blog is meeting other fathers who cook. Recently, I had the great fortune of being put in touch with Steven Flax, an award-winning journalist* who has raised and cooked for two wonderful and extremely discriminating daughters. He has a fantastic story to share. This is part one. The conclusion will run on Monday.

I once had a chance to cook dinner for Julia Child, and it was pretty nerve-wracking, but not only for the reasons you’d expect. At the time, I was trying to get my first job in a professional kitchen.

In 1975, I left graduate school to become a writer. Because I wrote like an academic, though, my writing career began failing spectacularly almost as soon as it started. There followed jobs as a crewman on a commercial fishing boat (a line trawler out of Marblehead), as a surgical attendant in a pediatric hospital, as a night desk clerk at the Harvard Club of Boston (where I was fired for sleeping on the job), and as a security guard at Boston’s Logan Airport, babysitting at night for Boeing 747 freighters that had gold, platinum, or other kinds of valuable cargo aboard.

By about 1976, I was getting published, but my writing income was very precarious. I was still in the “don’t-quit-your-day-job” category. And I needed a day job.

At that time, I had a pretty good reputation (among classmates, and roommates) as a cook. It was a hobby that enabled me to produce better-than-expected meals for friends. We saved money by not eating out in restaurants and I was able to avoid doing dishes after dinner, which I loathe.

Because I felt like I knew what I was doing in the kitchen, I applied for a job as a sous chef at a new restaurant called Harvest that was opening soon in Cambridge. The restaurant was a venture of a renowned architect in Boston named Ben Thompson, who had designed the renovation of Fanueil Hall Marketplace on the Boston waterfront. He had also designed two all-glass, side-by-side, office buildings with retail spaces on Brattle Street, a couple of blocks from Harvard Square. Harvest was on the ground floor of one of these buildings. One entire wall of the kitchen was glass.

Harvest emphasized using only the ripest natural ingredients. The menu was to change repeatedly in order to make the most of what foods were in season. Nowadays this approach is pretty common. Then it was forward-thinking. Thompson and his wife had hired a French chef who was not celebrated but was something of a virtuoso. At least he sure seemed so to me. His name was an evidently French name such as Jean-Luc or Henri.

I had been taught to cook by my father’s mother, whom I called “Bubbie.”  She was a fantastic cook, and a very indulgent teacher. Cooking together became one of the most wonderful experiences of my childhood. But I don’t think she ever taught me a single recipe. I just emulated what she did, developing a feel for what proportions of ingredients should go together. In effect what I got from her was a big storehouse of tips: how to slice and dice; what to watch out for when you’re making a cream sauce; how to make sure, when making a hollandaise sauce, that the warmed beaten eggs don’t overcook. Best of all, she showed me how to make latkes out of mashed saltine crackers.

Bubbie was Russian, and when I would come to visit for breakfast, she and I would make the cracker batter and fry the latkes in a cast-iron skillet with about two inches of bubbling salted butter. Then we would eat the latkes smeared with her homemade strawberry preserves. She served the meal with tea, which she would sip through a sugar cube she would place between her teeth. This was a very exotic experience in my “Leave-It-To-Beaver” childhood in Michigan.

When Henri interviewed me, I told him that I had no experience cooking professionally. I didn’t know what clarified butter was, I admitted. He asked me why I thought I could do the job, so I told him about what a great teacher my grandmother had been. “Ah,” he said, “la cuisine grand-mère, eh?” “Yeah,” I replied, not knowing exactly what he was driving at.

Instead of spending a lot of time discussing my qualifications, in his lousy English and my lousy French, Henri put me to the test. He told me to cook lunch for the staff, and then he left me alone in the beautiful, brand-new kitchen. Rather than hang around looking over my shoulder, he went into the dining room, to drink some wine, smoke a Gauloise, and chat up the pretty waitresses, most of whom were in college in the Boston area, and had as little experience in the restaurant business as I did.

Being left alone helped. I went rummaging through the walk-in refrigerator and found four big leftover roast prime ribs. If Henri had been watching me, he would have killed me for using meat like this for the staff’s lunch. To conceal my profligacy with such ingredients, I chopped it all up in big chunks, along with onions, cooked cold potatoes, and green and red peppers. I fried this in a big sauté pan with some bacon fat and clarified butter. This became some really wonderful roast beef hash, which I served with poached eggs on top and some frisé salad with warm bacon dressing.

Meanwhile, Henri was on his fourth glass of wine. One by one, the waiters and waitresses walked into the dining room after lunch and said to him, “Hey, this Steve can really cook.” Henri told me to come in to work again the next day. I owed it all to using such great leftovers rather than to any special skill as a chef. The sautéing was pretty straightforward.

Before I could consider myself hired, though, Henri pointed out that the restaurant first had to open. Harvest was due to serve its first meals to the public in a few weeks, and I had a lot to learn. My final test would come just a few days before opening, when Julia Child unexpectedly showed up with her husband.

That story, and more, will follow on Monday. In the meantime, here’s Flax's recipe for hash, a meal that’s received considerable attention this week thanks to the article in Wednesday’s New York Times.

I'm one of those cooks who is not too attentive to the strictures of recipes. The key to the hash was that I was using medium-rare, absolutely prime, prime ribs from a roast. I used a lot of meat. That alone distinguishes this hash from almost all other hash, which looks and tastes like dog food. I cut the prime rib meat in big chunks, along with big chunks of onion, cold cooked potatoes, and red and green pepper pieces. What made it different was that I heated a big skillet with a copious covering of clarified butter, augmented by a heaping tablespoonful of congealed bacon fat. When that was sizzling hot I sautéed the onions and peppers for a while, until the onions were a bit beyond golden, but not too brown. Then added the potatoes. I cooked it on not too high a heat. When the potatoes were getting sort of crusty, I added the meat and cooked it for a while so that everything was heated through and the top of the stuff in the skillet had a crust on it. It looked sort of how good hashed-brown potatoes look when cooked by a good short-order cook. When the contents of the skillet were sizzling hot and crusty it was done. I didn’t add salt or pepper until the very end, and if you want to try this at home, that’s what you should do, too.

*Steven Flax has been a writer, supervisory editor, or contributor to the New York Times, Forbes, Fortune, GQ, the Harvard Business Review, and The Economist, among other publications. He has received two national journalism awards for feature writing. An Editor-in-Chief four times, he has also ghostwritten four books and numerous articles and speeches for senior corporate executives. He lives in New York City.