Home Archives About
Snowed In!
Everything New is Old: The Strange Story of Bernarr Macfadden

The Coney Island Polar Bear Club’s New Year’s Day plunge into the Atlantic is a great New York City tradition. The annual swim, which is open to all, raises money for Camp Sunshine, a retreat in Maine for children with life-threatening illnesses, and their families. Abe de la Houssaye, who joined the Coney Island Polar Bear Club in 2004, is a Louisiana native who brings his own traditions to the holiday. He’s the father of two grown daughters, and he took some time out of his busy schedule to talk about being a Stay at Stove Dad.

I love cooking, although I do it professionally. If you were in New York in the eighties you might have been to one of my restaurants—La Louisiana or Texarkana or, later, the Ludlow Street Cafe and Tramps Cafe. Since then, I downsized my career. I still cook, but now I do it for a great little catering company called The Upper Crust, so I can do more of the things I want to do, such as writing, drawing (that's a self-portrait, below), and swimming. 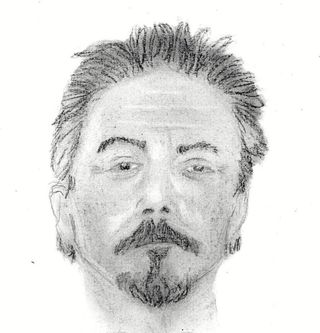 To become a member of the Polar Bear Club, which meets every Sunday from November through April, you need twelve swims in one season, and I think you need to make four a year to maintain active membership. This year I've been there almost every Sunday. Coney Island is changing and those of us who love it want to make sure we are around to influence the changes if possible and if not to at least savor the last days. As some Polar Bears say - no matter what happens they can't take the ocean away.

After the swim on New Year’s Day and a beer or two on Coney Island my family will follow the Cajun tradition of a late lunch of Black-Eyed Peas cooked with andouille sausage and smoked ham hock, accompanied by a mixed green sauté of collard, mustard, and kale. We'll also have corn bread with cane syrup and butter, and spicy Bloody Marys. The Bloody Marys aren't exactly Cajun but they go along nicely. And we'll be checking our stockings to see if  "Le Petit Bonhomme Janvier" left us any fruit, candy, or pecans.

I was born and raised in Breaux Bridge, Louisiana, the Crawfish Capitol of the world. It is a little town in the heart of the Atchafalaya Basin, and when I was growing up many people there did not speak English—only Cajun French.

Le Petit Bonhomme Janvier is the good little man of January. I've read that the early Cajuns didn't have a Santa Claus and instead the little man brought small gifts on New Year's Eve—mostly candy and fruit. I also read that early Cajuns celebrated Christmas on February 25th (Trapper's Christmas) because the birthday of Christ fell during the busiest part of the trapping season.

When I was growing up we were told that Petit Bonhomme was Santa's poor brother, and while Santa did the heavy lifting for Christmas, Le Petit Bonhomme bought candies, fruits and pecans and, perhaps, one little present on New Year's Eve. He actually saved the day a few times in my family when one of us kids experienced the disappointment of not getting what they wanted for Christmas through some miscommunication. In such a case a special plea could be made to the little man, who although he was very poor, always seemed very resourceful.

Having my daughters—one who is a teacher and lives in Williamsburg, Brooklyn, and the other who is getting her Masters at the University of Chicago—around for the holidays is, in a father's terms, about as good as it gets. During the early years when they were young, I didn’t spend much time thinking about what it would be like to relate to my girls as adults, and it's kind of mind blowing. First of all (fingers crossed and counting my blessings), they turned out to be fairly amazing young women and, dammit, they like their parents. Second of all, it's just plain good news for a dad (and mom) to be able to look at that long process with a feeling of accomplishment. Guess what? After all the ups and downs—the countless blessings and good fortune, including fun, successesm and friendships—these girls, along with their mother, jump to the top of the list of good things in my life.

Black-Eyed Peas are essentially the same thing as a Hopping John, though I just never heard that name in Louisiana. There is one legend that it got the name from the bastardized French pronunciation of the words "Pois a pigeon" but that one seems a stretch to me. I don't understand how you would pronounce either to make them sound alike, but don't blame me I saw it on the Internet; how could it be wrong?

Hopping John is traditionally eaten on New Year’s Day to bring good luck, and so is the Cajun version. The expansion of the beans while cooking symbolizes prosperity, and the color of the greens served with them symbolizes money (the cornbread with a touch of syrup just taste good). Here’s the recipe for you to make some Black-Eyed Peas yourself.

In a 1-gallon stock pot, heat the olive oil.

When the oil is hot, render the tasso or bacon for 2 or 3 minutes.

Add the onions and continue sauteing for 2 minutes.

Stir in the garlic, bay leaves and ham hocks.

Season with salt and pepper.

Bring the liquid up to a boil, cover and reduce to a simmer.

Cook the peas for about 45 minutes then add the andouille, and continue to simmer for another 10 minutes, or until the peas are tender and plump.

Remove the hamhocks from the pot and remove the meat.

Add the meat back to the peas and re-season if necessary.

Add the parsley and chives.

Sever with rice (white is traditional but we use brown and when we have guest we offer both), with one bottle of green and one bottle of red Tabasco served on the side.

Notes: It is advisable (but not necessary) to soak beans over night before cooking - it shortens to cooking time which allows for less nutrients to be cooked off and will make them  more digestible. Tasso, a specialty of Cajun cuisine, is a spicy, peppery version of smoked pork made from the shoulder butt. Andouille, a spiced and heavily smoked pork sausage, is another Cajun favorite. Both are available at specialty merchants and on the Internet.