Home Archives About
Teaching Our Children Well
The Artful Bolognese 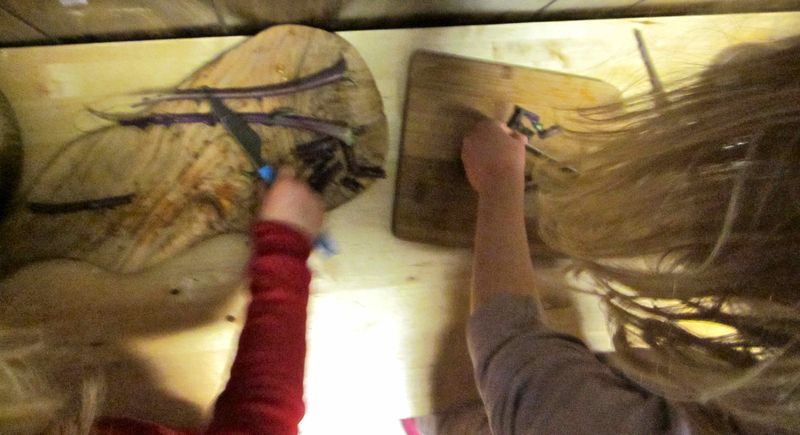 Santa Maria is a woman of few vices (assuming you don’t count me). When she gets addicted to something, it tends to be something healthy, and her latest fixation is the “Fly Sky High Kale Salad” recipe that I devised a few weeks ago.

Over the past few days she has made it half a dozen times, and she keeps buying the leafy green vegetable. At present, we have two heads of lacinato kale in the refrigerator, just waiting to be sliced, sautéed, tossed with toasted pine nuts, and dresses with Parmesan, olive oil, and lemon.

Her obsession with the salad is understandable. It is extremely delicious. One of my sisters is a devoted reader of this blog, and after she made it for her husband, he told her it’s "way, way, way" better than her usual method of sautéing it with garlic and olive oil.

Nina and Pinta liked the salad the first time I made it, but I don’t think they’ve had it since. Santa Maria keeps eating it up before they can get any of their own. Their interest in kale keeps is growing, though, albeit in a different way—they like to chop the stems and make “soup.”

The other night I came home to find small saucepot full of the nubby little green ends. Pinta had spent the afternoon cutting them up with her little blue children’s knife. She was so proud of what she had made. The next night, Nina, not to be out done, chopped a bunch and took a hunk of Swiss cheese out of the refrigerator to put in hers.

I had to draw the line there. It’s one thing to play with kale stems, it’s another thing to waste food. Soon, though I won’t be surprised if they start making real meals of on their own. Our bedtime reading is headed in that direction.

For the past few weeks, Nina’s choice has been “Little House in the Big Woods,” the first of Laura Ingalls Wilder's “Little House on the Prairie” series. If you think those books are just about quaint patterns of gingham and dainty ponytails, think again. As Pete Wells’ “Cooking with Dexter” column from earlier this year makes abundantly clear, there’s a whole lot of present-day, locovore inspiration in the book; the first chapter is about killing and butchering a pig.

Pinta, for her part, has taken to a new book, “Chef by Step,” by Chef Laurie. It’s a nifty cookbook for children full of bright pictures, clever illustrations, and easy-to-make-recipes that many adults would be happy to eat. If you’re looking for a good cookbook for a child, I suggest you pick up this one. Chef Laurie knows what she’s doing: I’ll have to show my kids this video she made about knife skills: