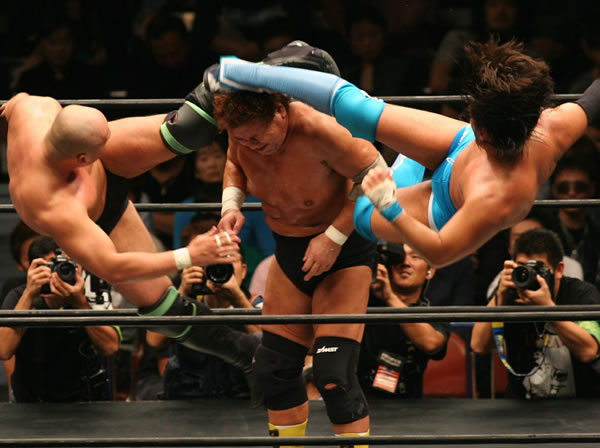 When both parents work, life gets a bit like tag-team wrestling. I was home last night at 7:25, and Santa Maria had the girls ready for bed. I kissed them goodnight and started to think about dinner for myself. Santa Maria put on some makeup and headed out to a work event.

Earlier in that afternoon, she had a craving for kale. The Park Slope Food Coop was out of lacinato kale, and only had purple-stem kale. Both are fairly similar, so she bought it. Taking it home, she discovered one key difference—she didn’t need to pull the stem out before making the Fly Sky High Kale Salad.  She liked this convenience a great deal.

Santa Maria left the kitchen and the rest of the house in perfect shape. More than perfect, actually. She had grated the Parmigiano-Reggiano cheese, cut half a lemon, and toasted some pine nuts for me. All I needed to do was wash the kale, chop it, and start cooking.

I wanted more than a salad for dinner, though, so I added a few things to the dish. Taking a nod from Pinta, who had combined penne with her kale the first night she tasted it, I decided to pair it with a bit of leftover spaghetti. I didn’t think kale and pasta and cheese would satisfy me, so I added prosciutto  (and some garlic, for good measure).

I cooked the kale the same way as the salad, fried up the prosciutto and chopped it, and warmed the pasta in the microwave. I tossed everything in with the kale when it was finished, gave it a quick stir, and sat down to enjoy it.

Pinta had other ideas, though. She was having a hard time going to sleep, and she made a couple of curtain calls. Twice she called out. The first time I went to her, I leaned in close and asked her what she needed in a whisper (so as not to wake her sister). “You smell like Bolognese,” she said. I told her about my dinner. She said she needed water. The next time she called out, we made a trip down the hall to use the bathroom. On her way back to her room, I gave her a hug and she said, “You smell like prosciutto.” That girl was paying attention.

Software companies release beta versions of their product all the time, but I’m not going to stoop to that level. I don’t think this recipe is quite complete. I used too much of the ham (I was hungry, and I threw in four pieces), and the dish lacked balance. Though I was happy to have it while wrestling with my parenting duties, I'm going to have to go back to the mat on this one.