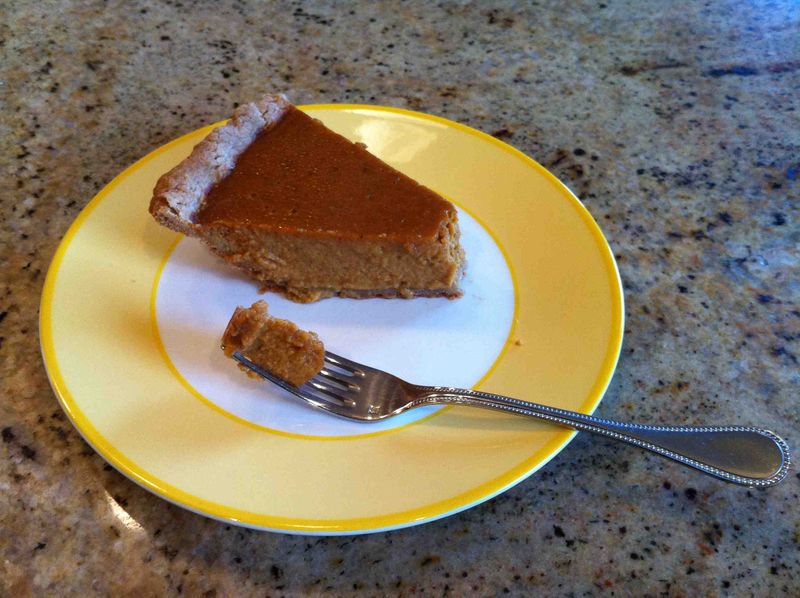 The run-up to Thanksgiving is well underway. I see it in the newspaper, on my Twitter feed, and on cable television (I’m guessing, as I don’t have cable). Around the Stay at Stove Dad home, plans are being laid as well. My sister on the Upper West Side of Manhattan, who volunteered to host this year, is busy getting ready.

She maintains a gluten-free diet, and though she’s promised not to make a gluten-free dinner, she has been hard at work perfecting some treats she’ll be able to eat herself.

This past weekend she tried out a gluten-free pumpkin pie recipe. A few readers have asked me for a pie recipe, and Santa Maria’s agreed to share her mouthwatering apple-pie secrets. She’ll be baking one on Wednesday to bring to Thanksgiving. In the meantime, here’s what my sister has to say about making a gluten-free pie.

She worked from a recipe on Gluten-Free Girl and the Chef, a wonderful resource for anyone looking to take gluten out of their diet without sacrificing flavor and adventure.

I always trust my sister when it comes to baking. Growing up, she’s the one who filled the house with lemon-meringue pies, snickerdoodles, and chocolate-chip cookies. I never developed much of a sweet tooth, but it was nice to know those treats existed (and I always marveled at the architectural beauty of a lemon meringue pie—all those peaks like little cathedrals).

A true multi-tasking contemporary mom, my sister made the pie while watching the USA national women's soccer team battle Italy. She used this recipe from Gluten-Free Girl and the Chef, and had the following comments.

Her recipe is a good one. I followed it exactly. Glad I did as it is not an easy dough to work with. It gets crumbly, and needs a lot of finesse. The only change I will make when I make another for Thanksgiving is to add a pinch of salt to the dough.

I followed her directions to use the recipe for the filling from the Libby can. I did. I have never done that. I have always used more elaborate recipes. But, the Libby recipe is perfect. I have to say I will never go back.

As for the final result: “It is terrific!!! I can't believe it. Wow. What a relief,” she said.

And, she added “The team USA women won in stoppage time in the second half. It was a brilliant goal and a devastating loss for Italy as they had held the USA to 0-0 through the whole game. They will play another game next Saturday in Chicago. If they tie that game, USA will still win the World Cup berth as away goals (today's goal) count twice!”