Home Archives About
Not On Bread Alone Department: Two Invitations to an Upcoming Art Show
Gallery Opening (Almost) Over: Must Be Time to Boil Water

Too Tired to Cook Dinner? Liven Up Pasta with a Quick Kale Salad Recipe 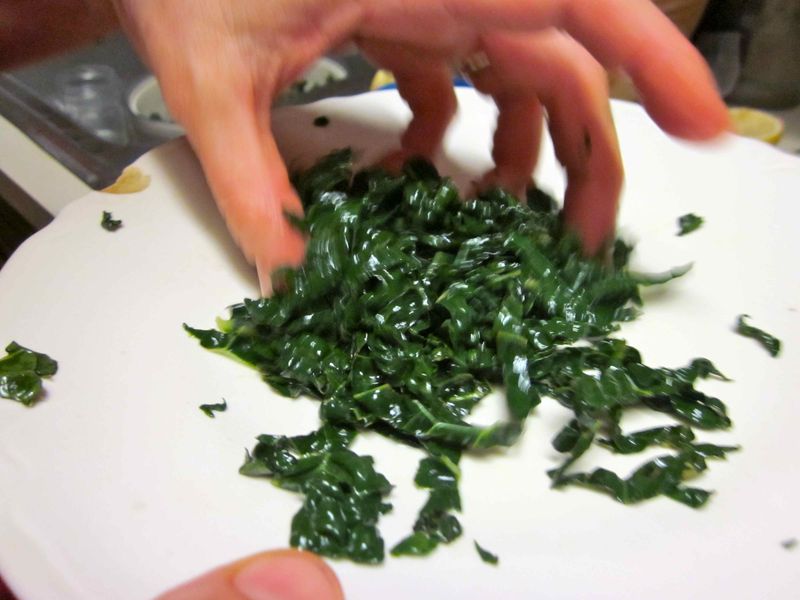 Santa Maria may laugh (or cry) when she reads this, but I was more tired than usual last night. It’s not because I was operating on five hours of caffeine-addled sleep after staying up to 1 a.m. the day before, to catch up on work after the Thanksgiving weekend—that’s nothing out of the ordinary.

No, yesterday, I left work early today to pick up Nina from school. Santa Maria had an important work meeting and our fill-in babysitter was out of town. After Nina and her sister ran circles around the playground behind her classroom, I took them over to the Park Slope Food Coop for our weekly shop.

They were a great help, but as much as I love that place at times it can feel like the seventh circle of hell. It gets crowded, and the lines can be longer than the Great Wall of China. I escaped relatively unscathed (no old ladies cursed at me), but I was exhausted after carrying four huge bags of groceries up four flights of stairs.

The kids were hungry by this point, so I had to break down and do something I despise—serve the same thing for dinner that we had the night before. In this case, it was Bolognese sauce with pasta.

Nina, who was the hungriest of all, was on the verge of tears at this idea. God bless her, I thought, I’ve really raised her right. I told her that I hated to do it, but I was too tired to cook anything ambitious. I offered to switch from spaghetti to penne, and this mollified her.

Then she asked me to make “that dish with the green things and olives in it.” The only thing green I could think of was pesto, but that wasn’t it. A couple of guesses later, and thinking of capers, I blurted out “Puttanesca?” “Yes, that’s it,” she said. “Oh, I said, I can make that tonight,” I replied, knowing that I could whip it up in the time it takes to boil water for the pasta. Then I realized that I was out of peeled plum tomatoes—I had forgotten to put them on the shopping list. That was the end of that.

Speaking of green things, Santa Maria has recently developed an insatiable craving for green vegetables. I bought kale on my shopping trip and knew that if I worked fast enough I could make my new “Fly Sky High Kale Salad” for her before she got home.

It’s a simple dish really, one I first ate at Prune a few weeks ago. I was there catching up with an old friend and I wanted to balance a burger with something healthy. Their kale salad appetizer pairs a chiffonade of the vegetable with toasted pine nuts, olive oil, and Parmigiano-Reggiano. It was delicious, so much so that I had to try it at home.

I first made it a week or so ago, and at that time I didn’t have any pine nuts. I substituted cashews (toasted in a cast iron skillet), and that made for a slightly heartier version of the dish. Whether or not you use cashews or pine nuts is really up to you.

The first time I made it, Santa Maria liked it so much that she said after eating it, “I feel like I can fly.” My girls didn’t have the same reaction, but I was shocked that they ate more than two bites. It’s that good. Pinta even paired hers with a bit of the plain penne, which would turn this salad into a main dish. I never thought I’d get my kids to eat kale, but I did last night. No wonder I was exhausted.

Wash the kale and strip out the thick center rib.

Roll a few of the leaves tightly together, like a cigar, and cut it into little circles, which will unravel into a perfect chiffonade.

Sauté the strips of kale in a little olive oil, for just a few minutes, until they change to a brighter green and soften a bit.

Toast the pine nuts in a cast-iron frying pan until slightly brown.

Combine the kale, the pine nuts, and the cheese in a bowl.

Dress with lemon, being careful to taste as you go and not to make it too tart, and more olive oil if you wish.