Home Archives About
Disaster Strikes
The Point of Making Meringues

A Friend Writes In: A Tale about Eating Mussels in Brussels, plus a Recipe 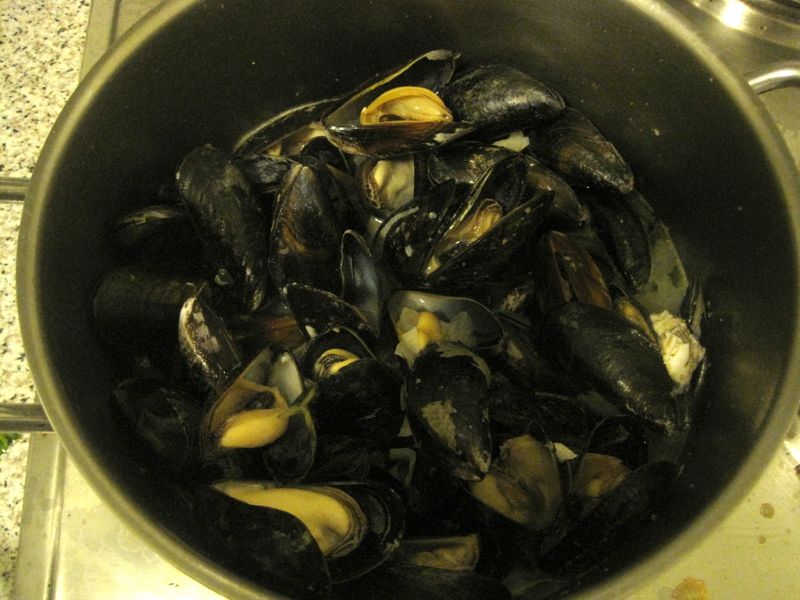 Due to the disastrous turn of events on Saturday, I was not in a position to cook very much. We had planned to go to the greenmarket, to buy fresh flounder from Blue Moon Fish, which is something we love to do. On past weekends we’ve made linguini alle vongole (pasta with white clam sauce) and mejillones a la plancha (skillet roasted mussels). But not this weekend.

Cooking might have been out of the question for me, but it wasn’t for a friend of mine, who has his own tale about eating mussels that he was kind enough to share.

Dan Kaufman is a musician with an excellent avant-rock band called Barbez. It often tours in an old school bus, but this story is from a bit further afield. He has a ten-month old son, who we shall call Primo here, and he is just back from a trip abroad:

It was our last meal in Brussels, where we had been living for one glorious month, and I hadn’t yet decided what to cook. We were here because my wife had been invited to teach at a modern dance school and I went along to help care for our ten month old son, Primo.

We lived in a sort of hotel room/apartment (there was a kitchen) with a few drawbacks such as an inexplicably angry, bald, desk attendant and the epilepsy-inducing florescent lights in our bedroom that flickered dimly and constantly through the night.  But the kitchen was quite spacious. There was also a low cut window in the living room where we set up a little play area for Primo. He loved to look out at the city and its low-rise skyline of spires and modernist office buildings.

We lived downtown, in the area called Sainte Catherine, near two long pools of water. The area is also a center for fish restaurants, and, according to what I had heard, until the 1970s was a bit like the old Fulton Fish market, with fisherman selling their offerings alongside the quays. There are still some fish stores in the area and there was also a man with a little stand in front of the Sainte Catherine church who sold mussels and oysters (and a glass of muscadet for two euros) that you could eat standing up.

Right nearby was another church, the 17th-century Eglise du Beguinage, situated on a quiet square and in which Primo and I spent hours enjoying its silence, or rather I enjoyed the silence as Primo slept in his Ergo carrier. It was better than walking the streets trying to avoid the trucks and other loud noises, which could jolt him awake quite easily. There was something quietly magical and anonymous about this European capital that suited us. It seemed to be no one’s destination of choice except EU bureaucrats and NATO officials.

The city also had great grocery stores. Coming from Williamsburg, Brooklyn, where one can purchase bacon coated donuts, but not a decent head of lettuce, we were taken with the neighborhood Delhaize, a local chain packed with a vast array of cheeses, ham, bread, yogurt, waffles, wine, water, chocolate, and God knows what else.

Before we left for this trip, l had taken to driving my school bus (long story) to Fairway for groceries. On my last trip there the bus broke down in the parking lot. After several hours pacing the lot and fending off a perturbed security guard, a tow trunk finally arrived and carted us off before quickly stranding me, because the bus was too large. Eventually I jumped in a cab with the perishables. The next day I was able to cajole a nervous but kind Indian tow truck driver to take me on a bumpy journey through Brooklyn (though his boss chewed him out for it) to find a shop that might resuscitate a 1992 eight-cylinder diesel school bus.

But back to the supper. After some Talmudic discussions with my wife, we narrowed down the choices for our last dinner abroad to two Belgian classics: moules or carbonnade flamande. We had gone on a rare date a week earlier, to a festive, unpretentious place called Le Pre Sale and had settled on the moules (mine with white wine, hers, a better choice, with garlic) though the carbonnades were rumored to be the best in the city.

Our narrow culinary choices were reflective, I suppose, of who we are. We’re the kind of people that prefer to put on Led Zeppelin with windows rolled down on a road trip rather than chance screwing up the moment with, say, the new record by Animal Collective. Sometimes the classics suffice, especially when you have limited time.

The night before our last we had our second date in Brussels, and despite both of us fighting off a hacking cough we savored steak frites and an enormous quantity of wine. All that beef made choosing mussels for the last night, much, much easier.

Though we loved our nearby Delhaize, one thing became clear: it is not the place to buy mussels. I had to toss two thirds of them out as they were open. As my wife put Primo to bed, I decided to improvise a Moules a L’ail, inspired by the delicious one she had had on our first night out.

Here is what I came up with, followed by a few reflections on my time away:

Moules a l'ail au basilic (Mussels with garlic and basil)

Heat a saucepan and add butter.
Allow butter to melt and add onion.
After about three minutes add garlic, wine, pepper, salt, and basil and cook for 3-4 minutes.
Add mussels and cover.
When mussels open (4-5 minutes) remove from heat.
Serve with green salad and baguette.

During the meal my thoughts drifted, prompted perhaps by the garlicky liquidI was soaking up with my bread. I remembered many things about our month, especially, in those last mouthfuls. The long walks with Primo in the Parc du Bruxelles and the morning the two of us stood hypnotized by the fountain at the park and the smile on Primo’s face whenever we saw the fountains at Sainte Catherine.

There was another taste too, that I recalled. The taste of social democracy we experienced at Babbo’s, a beautiful state-run children’s center with hand made wood toys, a slide that led into a giant tub of plastic balls, and pots of coffee for parents placed on top of a large table where they can sit and talk. I remembered the sweet Muslim boy named Osama and the effortless intermingling of people speaking Arabic, Flemish, French, Polish, and English. And as I downed my last mussels, my thoughts kept coming somehow, appearing now in a run-on fashion, as though in a Gertrude Stein novel.

The mussels reminded me of that morning. We had gone to Charli, a sweet little bakery, for a last coffee and pain au chocolat. Primo watched the bakers through the glass. A very nice new baker, who had just started there, smiled at Primo, who gave his incredibly warm smile back.

Before we had our pastry, we had gone to say goodbye to the Beguine church. Once inside, Primo really looked at it, all the different sides of the building and we were so amazed, both of us, by the light and the high vaulted arches and the stained glass windows.

When we walked outside, everything was magical, especially this unremarkable pole on the corner—I tapped it and he smiled widely when he heard the sound. Then he tapped it himself, and then it became our pole. And then we moved on. Ten minutes later, after we had played along the quay, we passed by it again. Primo yelled out his yearning yelp; he wanted to see it, so we returned to it and said our goodbyes one more time. Somehow that pole had all of Brussels in it. We danced all the way home, and greeted the desk man with joy and euphoria and thought maybe we lifted his spirits a little.

Finishing my meal, I felt a bit sad to leave Brussels, our church, Charli’s, the swings at the Parc du Bruxelles, our pole. But as I took a last drink of wine, suddenly, the voice of Bob Dylan came into my head singing “Just Like Tom Thumb’s Blues,” an old favorite. “I’m going back to New York City,” Bob sang, “I do believe I’ve had enough.”

Posted at 09:58 AM in Kitchen Music, Then Dinner, Travel | Permalink | 0 comments