Home Archives About
Cheating Heart: Leftovers are an Easy Way to Improve Quinoa Salad
Long Story Short: How Is My New Black Bean Recipe Going to Turn Out?

Men Who Cook Get a Little Love

A friend of mine sent me an article today that warmed my heart. Sara Leeder, a producer at CNN, wrote about exactly what I’m doing over here. "More Men Manning the Family Meal Making?" tells her story about being a working mother whose husband does the cooking.

In it, she makes an important point. “While cooking is the last thing I want to do after putting our little boy to bed, my husband seems to like it. Maybe it lets off stress, or is a release after a long day of work,” she writes. She is right.

The role of men in society is quite different now than it was even a generation ago. Women charged into the workforce in the seventies, and they haven’t looked back (consider how things have changed since the days depicted on “Mad Men”). Except in very rarified precincts of theoretical physics, no two objects can occupy the same place at the same time. If women’s participation has been going up in the workforce (both in status and in numbers) then it follows that men’s has been going down. In fact, very shortly, because of the nature of the latest recession, there will be more women with jobs than men.

For many, work is a place of enormous stress these days. There is a place, though, where men are wanted, where their efforts are rewarded, where they can be in charge, and where they can enjoy themselves. That place is the kitchen. The pay may not come in dollars (though cooking at home can save money, and a dollar saved is more than a dollar earned: when you figure taxes in, it takes about a $1.25 to bring home one buck), but men who cook are highly compensated. Their homes are flush with moments of happiness that take-out or frozen food can’t provide. Who doesn’t feel better after a good meal and a glass of wine?

A growing number of men understand this. The poll at the end of the article demonstrates it. Of the 6,000 or so responders, in more than half the relationships, the men do more cooking than the women. 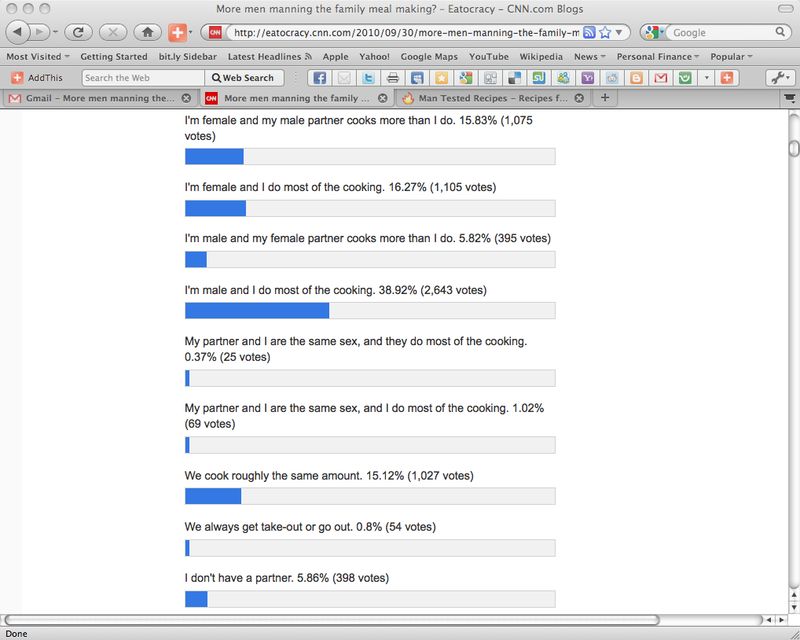