Leo Cullum and the Taste of Anchovies 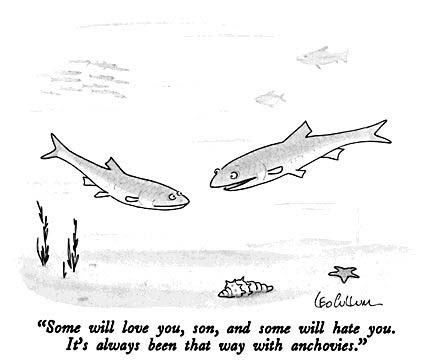 The other day, a friend of mine, the film critic Richard Brody, was telling me about his children’s tastes in movies. Though his eldest daughter, who is just off to college, listens to musical acts that are popular with her peers, like Lady Gaga and Nicki Minaj, and her interest in fashion is most up-to-date, the movies she likes are, well, a bit more obscure.

She likes old ones: Joseph Mankiewicz’s “Dragonwyck,” Alfred Hitchcock’s “Rear Window” and the Busby Berkeley’s musicals “The Gang’s All Here” and “42nd Street.” The same is true for his youngest child, who plays soccer and does other normal teenage things but will leave little notes about “The Heiress” or “Mister Roberts” around the house. They were routinely exposed to the films of Charlie Chaplin, classic musicals and comedies, and even Jacques Tati’s “Playtime” at a young age, and they developed exotic preferences that have remained.

Personally, I grew up with strange tastes in pizza. The only time we ever really had it was at home, after a vacation. A long drive would end with two or three large cheese pies, eaten, out of their open delivery boxes, at the kitchen table. At least one of the pies would be topped with anchovies. I don’t know why. No one ever asked me what I wanted on the pizza, but I do know that I’m the only one in a group these days who even thinks to order an anchovy pizza. My brothers and sisters often feel the same way.

I think of anchovies as one of life’s greatest pleasures (keep them on hand for a Puttanesca sauce, a reliably quick and tasty weeknight dinner), but not everyone agrees. The longtime New Yorker cartoonist Leo Cullum captured that dynamic perfectly in the above image. I was saddened to learn on Monday that Cullum had died of cancer. Cullum came to cartooning late in life, and he became one of the magazine's most popular contributors. William Grimes’ obituary in the New York Times tells his fascinating story.