Friends: A Cause for Celebration and Edward Giobbi's Lasagna Recipe 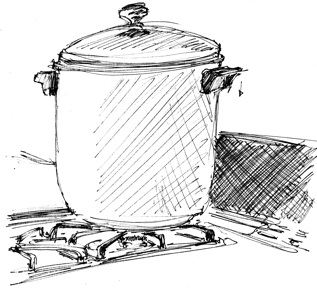 The same day I read David Brook’s column, which prompted yesterday’s post about friendship and entertaining, I happened to have coffee for the first time with a professional acquaintance, Alice Fixx, a woman whom I’ve had on-and-off contact with for a number of years, and who has always treated me kindly. We share a certain kinship (she’s a fan of this blog), and I wanted to meet her because I had thought I would never get the chance.

In January of this year, she told me she had been diagnosed with cancer. I assumed (quite erroneously thank God), that I wouldn’t be hearing from her for a long time. She surprised me a week ago with an email, and I ask her if she’d like to get together.

We did, and it was an extremely rewarding experience. I really enjoyed learning more about her, and she told me that everything, even the darkest thing has its benefit. She said that were it not for getting cancer, she would not have realized how loved she was. When she learned about yesterday’s post, she wrote to elaborate.

"I've spent the last four days cooking for a dinner party (one of several) that I'm having tomorrow night to show my appreciation to people who were so kind and generous to me during my treatment. Tomorrow night's guests include a neighbor who drove me to radiation everyday for six weeks, another neighbor who frequently called to have me join her family for home cooked meals, and one of the nurses from Sloan Kettering.

I didn't have to buy a gram of food for seven months. Friends from out of town (from as far away as Paris and London) sent packages from Zabar's and Zingerman's. Local folks sent deliveries from Agatha and Valentina and Dean and DeLuca. Almost every time I left my apartment for medical treatment I'd return to find little treats hanging on my doorknob. At Easter time I found six anonymous Easter baskets full of goodies....and I'm Jewish!

So how could I possibly return all this love? By cooking, of course! There will be dinners for eight until the last of these angels has been feted at least once. After all, these are the people who made it possible for me to, once again, do what I love: feed my friends.

We'll start with Marcella Hazan's minestrone from her first book, then move on to Ed Giobbi’s lasagna, and spinach salad. The grand finale dessert is an elaborate recipe I found in a magazine called "Intermezzo" several years ago, and always gets raves: banana cake with caramel filling, mascarpone frosting, and decorated with caramelized banana slices, If you were into baking, I'd send you the recipe."

I’ll have to try and get it from her. In the meantime, here’s the lasagna recipe, which first appeared in the New York Times, in 1973.

The World's Most Incredible Lasagna from Ed Giobbi, via Alice Fixx

Pour off almost all the fat from the skillet and add the chuck. Add salt and pepper to taste and cook, breaking up the lumps in the meat. Add the mushrooms and garlic and cook, stirring, till the meat  loses its red color. Continue cooking till the meat starts to brown.

Skin the sausages and slice them thin. (I process them, with skin, till crumbly, in the food processor.) Add them to the meat. Add the marinara sauce and partly cover. Simmer about 45 minutes, stirring occasionally.

While the sauce cooks, melt 3 Tbsp. butter in a saucepan. Stir in the flour, using a wire whisk. When blended, add the milk, stirring rapidly with the whisk. When thickened, stir in the cream and season with salt, pepper and nutmeg. Stir this sauce into the meat sauce.

Preheat oven to 375 degrees. Cook the lasagne till al dente. Drain and rinse in cold water.

Assemble the dish. Spoon a layer of sauce over the bottom of a baking dish. Add one layer of lasagne. Spoon another layer of sauce over this and add a layer of mozzarella. Sprinkle with Parmigiano. Spoon 2 Tbsp. melted butter over this (I omit this.) Continue making layers, ending with mozzarella, Parmigiano and melted butter. Bake 45 minutes at 375 degrees or until piping hot and bubbling.

Heat the oil in a large skillet and add the onion, carrot and garlic. Cook, stirring, till the vegetables are golden brown.

Put the tomatoes through a sieve, pushing pulp through with a wooden spoon. Discard seeds. (I just puree them, with seeds, in a food processor.) Add pureed tomatoes to vegetables and add salt and pepper to taste. Partly cover and simmer 15 minutes. Put sauce through a sieve and push solids through with a wooden spoon (or use food processor.) Return sauce to the skillet and add remaining ingredients. Partly cover and simmer 30 minutes more.
Yield: 6 - 8 cups or more