Home Archives About
The Color of Pomegrantes: A Dialogue
Friends: A Cause for Celebration and Edward Giobbi's Lasagna Recipe

How to Win Friends and Influence a Bolognese Recipe 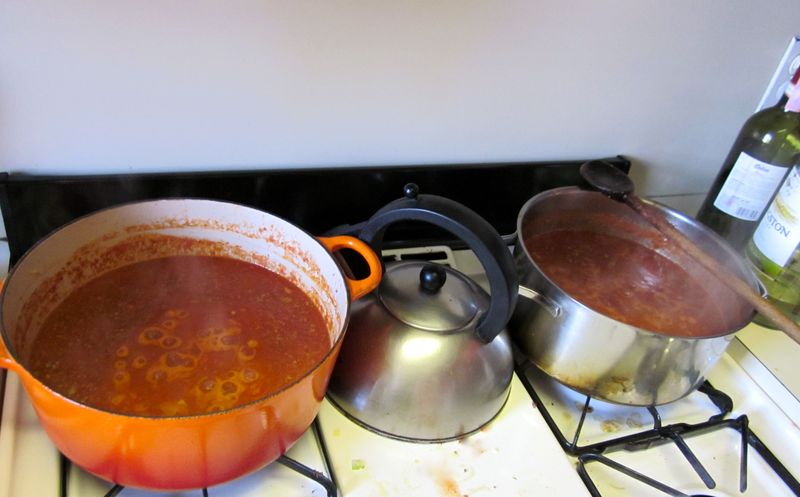 Late last week, David Brooks wrote a column in the New York Times pointing out that network-television comedies have changed during the past two decades from being centered on families (“All in the Family,” “The Cosby Show,” “Different Strokes”) to revolving around loose sets of friends (“Seinfeld,” “Friends,” “30 Rock”).

Brooks picked up this observation from an essay by Neal Gabler in the Los Angeles Times that goes into much greater detail, but basically TV is different now because the middle-aged television audience is different.

In most households, both parents work and yet, they spend more time with their children than parents did a generation ago. What falls to the wayside is friendship. There are more television shows about friends not because we all have more friends in our lives, but because we have fewer.

As it turned out, we had plans to have a friend and her three-year-old over for dinner (she’s been on her own with him for a few days, while his father is out of town on a business trip) on Saturaday night, and for the past few weeks I’ve been trying to make a big pot of Bolognese sauce. It’s something I just need to have in the house, and I can’t really relax unless I know there’s some on hand. It freezes well, and can always be relied upon to fill a hole in a weekly menu on short notice. I had all the ingredients on hand to make it, and having people over for dinner provided just the impetus I needed to make a batch. A very big batch. I thought, “why not invite a few other people over?”

So I started to make some calls. First to friends who live so close that they can peer into our apartment, from across the antiquated clothes line towers, but who we don’t often get to see. Then to another friend with a kid whose husband was away. Then I had to stop. Santa Maria was starting to lose her patience (she objects when I plan big parties, then always enjoys them). Besides, we only have seven chairs.

I’m so practiced at making Bolognese that I can make it in my sleep. Saturday, however, I was presented with a small challenge. I like to make the sauce with chicken stock, but I was out of it. Intent on making big batch of the sauce, to have extra for the freezer, I needed to find another liquid to replace the stock.  I had two pounds of beef, five 28 oz cans of peeled plum tomatoes, and plenty of wine, but I wanted to stretch the sauce.

Classic Bolognese recipes call for making it with milk. I’ve always shied away from that because I like my sauce lean. Marcella Hazan insists that it makes the meat tender, and I thought, now’s my chance to see if she’s right. I don’t know if the meat was more or less tender than usual, but I do know that my friends were pleased, and I was overjoyed to see them.

Sautee the onion, carrots, celery and bacon until the onion is translucent and the bacon fat is rendered.

Add the ground beef and cook and break with a fork or other kitchen instrument until all the pink is cooked out of the beef. Salt the beef.

Add the milk and some nutmeg and cook until it is boiled off.

Add the wine and repeat.

Add the tomatoes and simmer for three or more hours.

Season with more nutmeg and some cinnamon.

Note: When making it in this large a quantity, I use two pots.