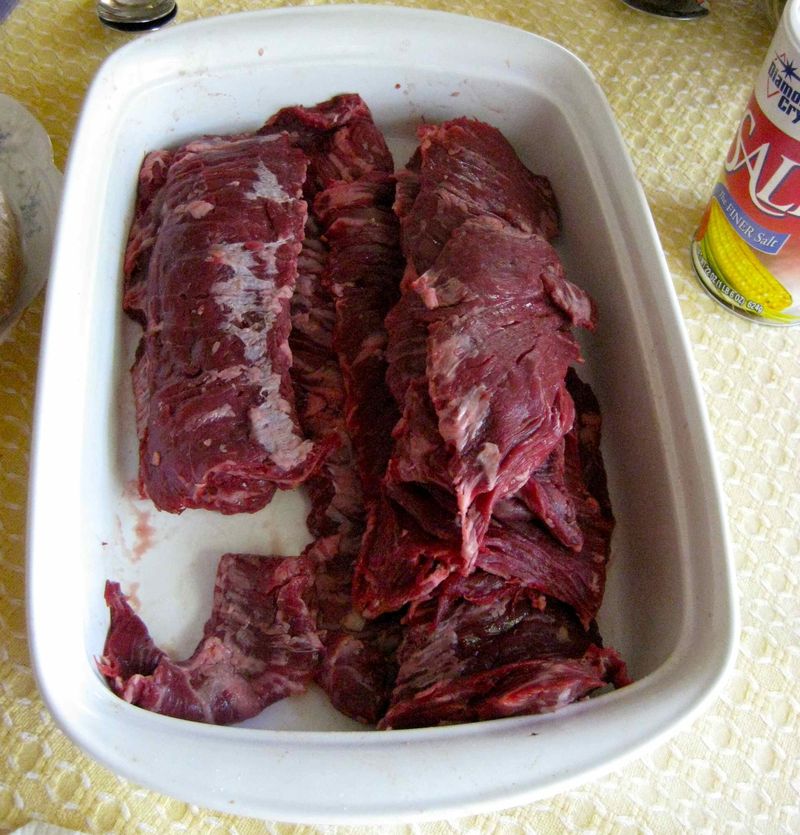 As a man, I feel like I'm supposed to like barbecuing, but the truth is that I don't. Every few months, however, I forget this. Thoughts of fire and smoke and meat incite some kind of atavistic urge, and I'll find myself standing over hot coals. My amnesia usually coincides with a major holiday, such as Memorial Day, which is the last time that I did some grilling.

Because it is now high grilling season (see Mark Bittman's article in today's New York Times on "101 Fast Recipes for Grilling"), I'll share a bit of what I learned that day, and since.

I was at my mother's house and she suggested that we have a few of the aunts and uncles over for a start-of-summer barbecue. I was game to cook. Talk turned from chicken to burgers to steak. I pressed for the latter, and headed to the butcher. At the the market, I relied on the clerk to suggest a cut, as I know next to nothing about steak. I didn't want to spend a whole lot, and he suggested skirt steak. "Four minutes a side" he said.

The other thing that I didn't know that day is that grilling can be carcinogenic. A little piece in the Times a few days later, on May 27, by Anahad O'Connor, set me straight. Apparently, the high temperatures that are so prized, "create toxins called heterocyclic amines, which have been linked to some cancers. Marinating lowers the risk by preventing the formation of the toxins." Especially effective is rosemary. The article gives a couple of suggested marinades that sound both tasty and healthy.

I didn't know about the benefits of marinating when I was cooking the skirt steak. The clerk ended up being wrong about the timing, but I liked the cut anyway. It wasn't just the taste that appealed to me, it was the speed with which it cooks. I'd say it only needs two minutes a side. As far as I'm concerned, the less time at the grill, the better.