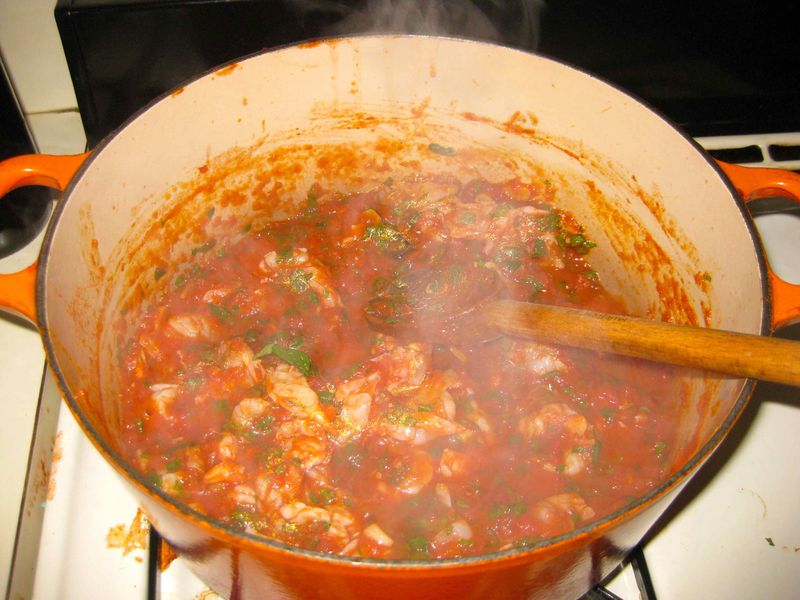 When Pinta was an infant, I did most of my cooking very early in the day. She used to wake before five, and not go back to sleep. Ever. She's a free-spirited, independent-minded soul and there was no changing her mind. I would put her on the floor beside me in the kitchen and start chopping vegetables in the pre-dawn hours. Standing over the cutting board I finally understood the U.S Army advertising slogan of my youth. Their television ads used to trumpet the fact that "We do more before six a.m. than most people do in a day." That's because they were doing stuff at night. It was dark when I was cooking. And those were dark days for me, too. I walked around in a tunnel-vision state of sleep deprivation. I'm still amazed that I was able to hang onto my job and remain married. It was tough.

Pinta has since grown up and now, with a random waking every now and again, generally sleeps until about seven. This morning they stayed in bed until seven thirty. The other day, they didn't even get out of bed until eight-thirty. I know that the grown-up thing to do would be to set my alarm clock and get on with my day at a respectable hour, but I can't just yet. I'm enjoying sleeping late too much.

As a consequence, I've had to find a new time to do my cooking. I switched to cooking the day before, whipping up soups and stews and sauces after doing the evening dishes. I'm always thinking a meal or two ahead, so it seemed perfectly natural for me to finish one meal and then start cooking the next one. This worked well until our recent real-estate travails. Nothing like a "Notice of Termination" to change one's schedule a bit. Now, at night I spend the hours before bedtime scouring the internet looking for a new place to live.

Not all of my time searching for a new place is spent at a computer keyboard. Some of it is spent trekking around the city looking at places. Last weekend we were in Hudson Heights. This past Wednesday, in the midst of a blizzard, we were dragging the kids behind us on sleds to look at a floor-through in the neighborhood. It was in a perfect location, and it was close to a perfect apartment. The only thing missing was about six-hundred square feet. If we were completely different people with about a third as many possessions, we'd be perfectly comfortable there. Alas, the search goes on.

Ever since I first moved to Park Slope, I've loved the neighborhood. I'm not the only one, though, and a lot of other people have come to know its charms. They've moved here in droves, and the price of an apartment has shot through the roof. Prices have come down a bit over the last year, but they're still stratospheric. It's unlikely that we'll be able to find a space with enough room for what we have to spend. So, we're looking all over the city. And every time I consider moving away, I think first of what I'll lose--easy access to high-quality organic food.

The day before the snowstorm, I came home from work intent on making a shrimp, garlic, and mint pasta sauce that has long been a favorite of ours. The recipe comes from Mark Bittman, and he calls it Roman Shrimp. It requires fresh mint, which I happened to have in the house. I didn't want the mint to go bad, so I decided to make the sauce. For some reason, I didn't have any frozen shrimp in the freezer, and I had to buy some. It was very easy for me to do so because we live almost right across the street from the Park Slope Food Coop. As it happened, the coop was jam packed with panicked pre-storm shoppers and there had been a run on the frozen shrimp. There was none for sale. Just down the block, though, there's a fancy store called Union Market, and I knew I could get shrimp there. I popped in for a pound and was home before seven.

The convenient location is the best thing going for my present apartment, and the most attractive thing about finding another place in the neighborhood. I was talking about this to my therapist, and he thought I was crazy. At that moment, I was still seriously considering the shoe-box floor through. He didn't think it would be wise to squeeze my children into a room that's five by seven (no joke) just because it would be easy to buy shrimp. What does he know?

Spicy Tomato Sauce with Shrimp with Garlic and Fresh Mint a.k.a. Roman Shrimp

Put a large pot of salted water on to boil for the pasta.

In a large sauce pot, heat olive oil and then add the garlic and the chili pepper. Cook the garlic until it is brown. This gives the sauce an intense, dark note.

Add the tomatoes and reduce.

Start to cook the pasta.

When the pasta is cooked, stir the shrimp into the tomato sauce.

Cook the sauce until the shrimp curl into spirals and are cooked through.

Add the mint to the sauce and serve.