Home Archives About
Harried Dad's Aloo Gobi
The End of an Era, and a Zucchini and Mint Pasta Recipe

How to Tell You When You are Over Tired plus A Recipe for Roast Chicken Breasts with Lemon, Tomatoes, and Olives 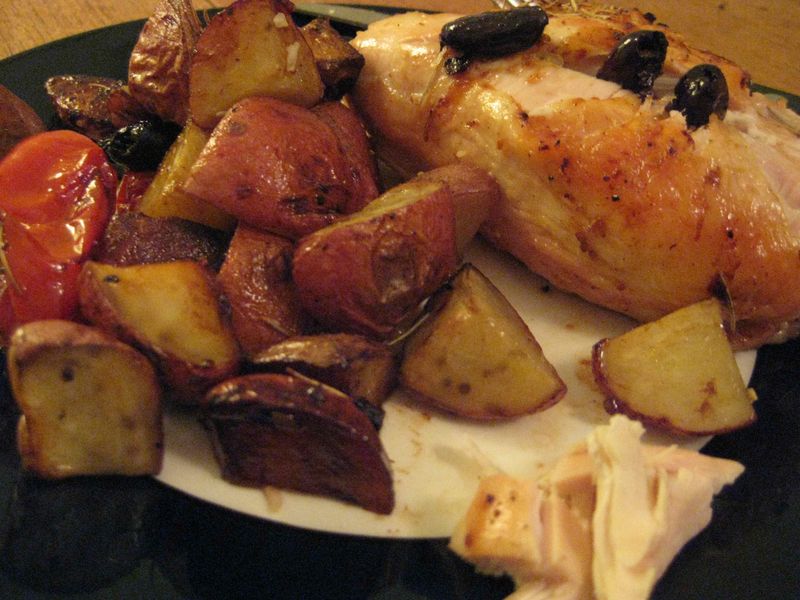 Working all day and much of the night and cooking for a family of four can be tiring. After years of enduring extreme sleep deprivation thanks to the erratic nocturnal habits of my youngest child, I know the signs of exhaustion well.

Take yesterday, for example. After eating some leftover aloo gobi for lunch, I was washing my fork in my office's communal kitchen. I dried it with a paper towel, opened the garbage can, and then held on to the wrinkled paper towel and thew the fork in with the refuse. Whoops.

Then I went home to eat a delicious 'in the hills of Provence' dinner of roast chicken breasts, olives, tomatoes, potatoes, and lemon. It's a simple dish that I learned from the "Gourmet Everyday" book I'm so fond of. I chopped the potatoes and sliced the lemons in the morning and laid out the chicken in the pan, so all Santa Maria had to do was put the dish in the oven and roast it. No real work on her part, and a fine dinner for her, the kids, and me. A perfect combination.

There was one catch, though. While I was cleaning up after dinner, Santa Maria opened the garbage can in our kitchen and pulled out a big white clump of who knows what. She said, "you cooked one of the pads." I didn't know what she was talking about. She said, "from the package of chicken." Apparently, when I mixed the chicken breasts with the lemon and garlic in the morning, I included one of the absorbent pads from the chicken's packaging. Double whoops. So much for eating organic chicken. Fortunately, Santa Maria found the errant pad about midway through the roasting session and pulled it out. I don't think it had much of an effect on the flavor, but then again, I was tired.

Dice two of the garlic cloves, salt the pieces, and dice some more.

Mix the garlic with the lemon juice and 2 tablespoons of the oil and whisk.

Coat the chicken breasts with the garlic-lemon mixture.

Make a bed of the lemon slices in the bottom of a roasting pan.

Put the breasts on the lemons, skin side up.

Arrange the vegetables around the chicken in the roasting pan.

Toss in the olives and sprinkle with rosemary.

Roast in the oven for about an hour, or until the interior of the chicken breasts registers 175 on an instant-read thermometer.

Note: The amount of chicken in the recipe can be doubled, but that may reduce the room in the pan for the vegetables. If doubling the chicken, plan on spreading some of the vegetables out in a second roasting pan.

*I have made this recipe at 350 degrees, but the original from "Gourmet Everyday" calls for heating the oven to 450 degrees. My old oven must have run hot, so I used a lower temperature. A reader notified me that 350 wasn't hot enough to get his dinner done in time. he ended up ordering Thai-food take out. I hope that doesn't happen to you. Know your oven, and if it's the first time you are making this, my advice is to start at 450 degrees.