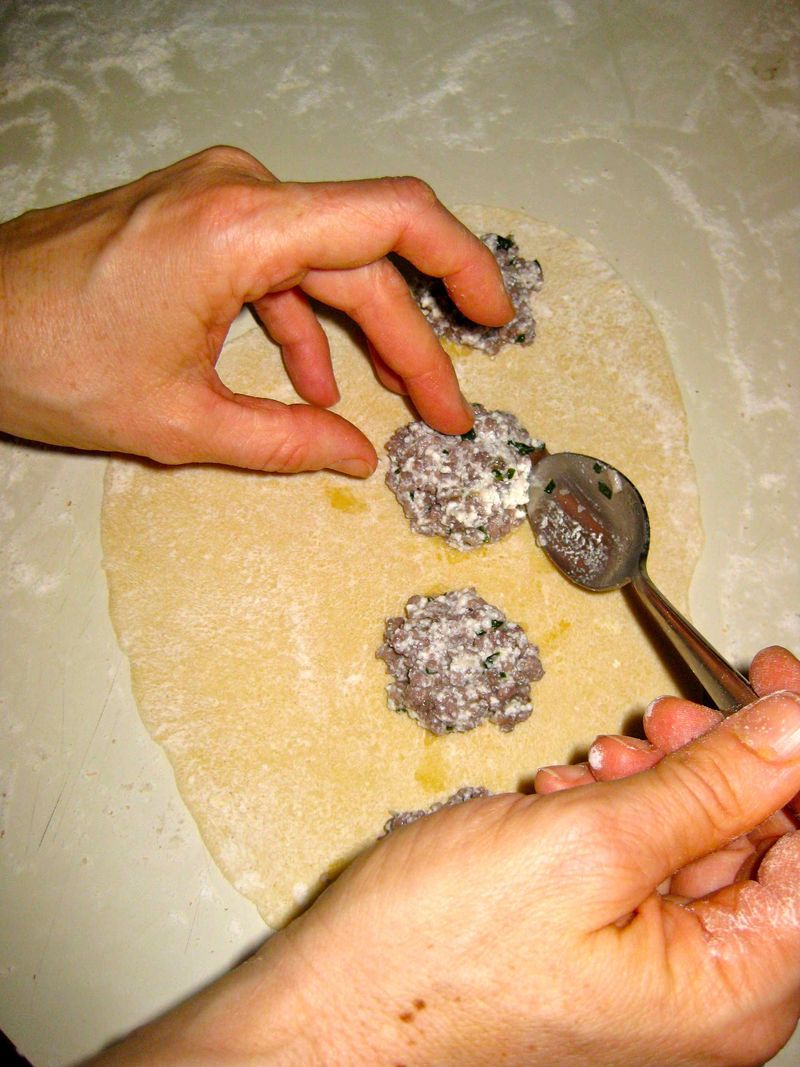 Cooking for a family often feels like running on a treadmill--keep moving, or fall off. I would like nothing more than to get out of the kitchen and spend all my energy solving our housing crisis (we're facing eviction), but I can't. We still have to eat.

The truth is, we are in a crazy limbo right now. Even though we will be moving out of the apartment in the near future, at the moment there's a great peace. It is relaxing to know one's fate, and to enjoy the absence of insane neighbors down below, screaming every time our kids run down the hallway. It's okay now, go ahead jump and thump to your heart's content.

Towards the end of December, I had my last last verbal interactions with the now ex-neighbors. It was a weeknight, about 7:45 when they called on the phone. The man was upset, for the umteenth-time, about the noise the kids were making. He accused me of being disrespectful because he said that we knew that he was moving out. That was a shocker. Did he have any idea how much time I spent chasing after the kids and telling them to quiet down? Did he have any idea about the anxiety their every footfall created? The man became more and more accusatory on the phone. "You won," he said. "We're moving out and you get to stay."  After he got of the phone, I sat down and thought about his call. I suddenly realized what day it was. It was the final day of December. He was calling to complain about the noise of two little kids playing at 8 pm on New Year's Eve!

They are gone, now, so there are no more phone calls. And while we plot our next move, I have time to spare in the kitchen. They say that behind every great man, there's a woman. I don't know about that, but, in my case, behind every great dinner, there's a woman (and two girls). Yesterday, Santa Maria proposed that we make fresh ravioli with pork, porcini, and parmesan stuffing. I was game. It is one of my old favorite dishes.

We've made fresh pasta three or four times before. The first time was years ago, before we had kids. It was one of the most revelatory cooking experiences I've ever had. Nothing I'd ever made tasted as wildly different than what I expected and as uniquely delicious as fresh pasta. That first time was remarkable.

We still haven't quite mastered the technique of rolling out the dough and cutting the pasta, though Santa Maria might have a different opinion. She's the one who, with her baking experience, tends to take care of this task. Our guidebook in to the country of fresh pasta is Mark Bittman's ever-useful "How to Cook Everything." He gives tips and techniques about making the dough (it's easy, but not as easy as he makes it out to be), and basically it comes down to mixing flour, eggs, salt, and a bit of water into an easy to work dough.

Santa Maria makes the ravioli after I take care of the stuffing. It is a mix of ground pork, garlic, red wine, and chopped porcini. I'm not completely content with the way the ravioli turned out. They were mighty delicious, but I want to refine the recipe and method a bit more before share how to cook them.

Before cooking last night, I took a look through Marcella Hazan's "Essentials of Classic Italian Cooking." She goes into a bit more detail than Bittman, and soon, perhaps as soon as we find that future apartment with an open kitchen and acres of counter space, I'll try some of the things she recommends. First order of business: finding "a good lumber-supply house" to cut a pasta rolling pin from a hardwood dowel. Make that the second order of business. The first one will be getting a pasta rolling machine. That will simplify my life.

I did learn something exceedingly useful from reading Hazan, and that is how to make a simple and delicious marinara sauce for the ravioli. I used to make a sauce with butter, canned tomatoes, and a diced onion. My kids have that typical fear of onions, though: they don't like to see them in their food. They don't dislike the taste. I know, because I watched Nina recently devour a hot, buttered bialy (just picture the confused look on her face when I told her it was full of onions.)

I was contemplating a way to make the sauce so they would eat it (i.e. with no onions visible), when I came across Hazan's recipe. It is genius. She calls for the same ingredients--tomatoes, onions, and butter--but she simply says to cut the onion in half and let it simmer in the sauce for forty-five minutes. Amazing. It has much the same flavor as the one I'd made previously, and, miraculously, no onions were visible. I adjusted the ratio of butter to tomato a bit, and I increased the size of the recipe. She calls for five tablespoons of butter to one can of tomatoes. You can make it that way if you prefer. My recipe is a bit lower in fat, but still mouthwatering. She says of hers, "This is the simplest of all sauces to make, and none has a purer, more irresistibly sweet tomato taste. I have known people to skip the pasta and eat the sauce directly out of the pot with a spoon."

We enjoyed making the meal so much that, in spite of the stressful times, we spent a deliriously happy evening in our tiny kitchen. We were so enthralled in the mixing, kneading, and simmering that we couldn't make it the ten feet to our dining room. Santa Maria was rolling out the ravioli. I was dipping them in the boiling water and fishing them out moments later. All four of us were elbow to elbow, scarfing down fresh pasta and that wonderful sauce. I didn't have a place to sit. I kept saying that it felt like we were eating on a train, at rush hour. It was a real joy.

Tomato Sauce with Onion and Butter

Place the onion in a large sauce pot with the tomatoes and the butter. Simmer for forty-five minutes. Salt to taste.

Note: I added fresh basil at the end. It's a nice touch, if that's what you're looking for. Also, this recipe is for a large serving for four or more hungry eaters. I had a pint left over and I froze it.