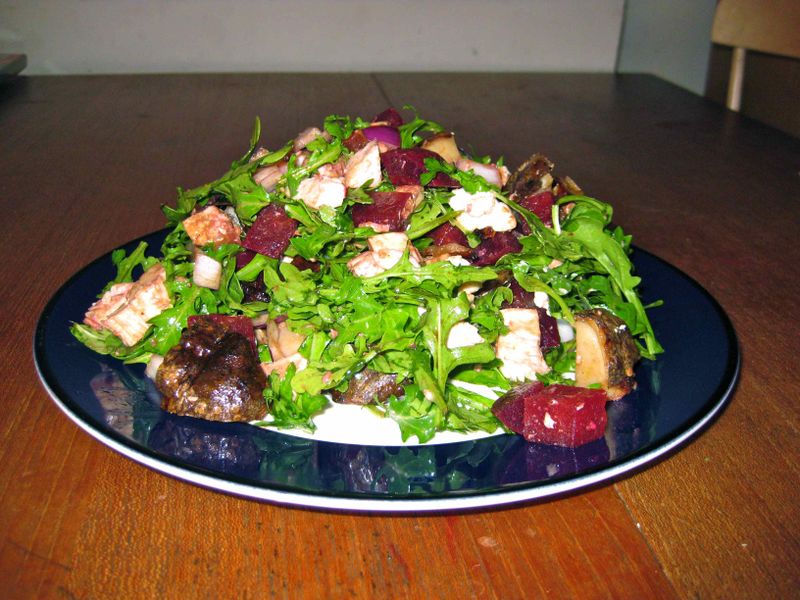 We crossed a major developmental milestone with Nina on Saturday afternoon. She told her first fully formed, all original joke. Santa Maria was at the other end of our apartment with the kids, who had just gotten up from their naps, and I was, as usual, holed up in the kitchen. I was trying to prep things for dinner that night. We were having friends over and I didn't want to be cooking while they were here. I wanted to be free to talk with them.

It was getting late in the day and I wanted to go outside to play with the kids. Santa Maria was exhausted from the Thanksgiving weekend, but I was hoping she could get them out of their pajamas and ready to go. I yelled down the hall to her, "Can you at least get the kids dressed?"

Nina heard me and said to her mother, "Does that mean you are going to cover us with olive oil and vinaigrette and eat us up?"

Last night, I crossed a developmental threshold myself. I tried to improvise a dish out of leftover ham and rice and some frozen peas and corn. I failed. Santa Maria likes to say "He who dares, wins." Not always. "Ham and curry," she said, "there's a reason you've never heard of that before."

The curry powder didn't work out last night, but no big deal. This evening, I had another chance to scale the mountain of food presently in my refrigerator. We had plans to go to dinner at a friend's house, but Nina is running a fever and has a bit of an earache, so we stayed home.

Recently, I've been in the habit of poaching chicken breasts at the beginning of the week and eating them for lunch and some dinners over the ensuing days. This week, I felt like a change, and I decided to roast an extra chicken on Sunday night, and use those leftovers to meet my protein needs for the week.

Nina's sickness started that Sunday night, and she didn't have much appetite. Santa Maria, myself, and Pinta ate a fair amount, but two chickens is a lot of, well, chicken. I realized this when I cut up and picked the carcasses clean that night. I had enough meat for a small standing army.

So, it seems like my task these days is to find new ways to eat the chicken. I often wonder what I would do for food if I didn't like chicken. It is the meat I eat most often. Having just read Jonathan Safran Foer's new book, "Eating Animals," which details and dismembers the factory farms that provide nearly all of our meat, it's getting a little harder for me to eat the bird. I tend to purchase chickens from Murray's Farms, and they are free-range and local and antibiotic free, etc. etc. They come with all the feel-good labels you can imagine. But the fine print reveals that they contain up to 5% retained water. I now know what that means, and it isn't pretty. Believe me, you don't want me to go into it now. You can read his book to find out what it means. Maybe later I'll find the courage (and cash) to change providers, and then I'll blog about it.  For now I'm practicing a sublime form of denialism. At least it doesn't taste bad.

We have some fresh arugula in the house because we were going to bring it to our friends this evening. I used that as a base for a salad with beets, bacon, goat cheese, and red onion. I had some leftover baked potato, and, of course, that chicken, on hand, so I threw them into the mix as well. This is the kind of meal that works on many levels for me. It is nutritionally rounded, with a green vegetable, a starch, and a protein. But it is also full of individual flavors--bursts of goat cheese, sweet bits of beets, savory and crunchy bacon. Delicious, sensual, and full of variety, no joking.

Toss the arugula with the beets, onion, chicken, bacon, and goat cheese. Dress with balsamic vinegar and olive oil. Salt and pepper to taste.