Home Archives About
The Turnip Chronicles, or What I Learned this Thanksgiving
Winter Salad of Savory Satisfaction 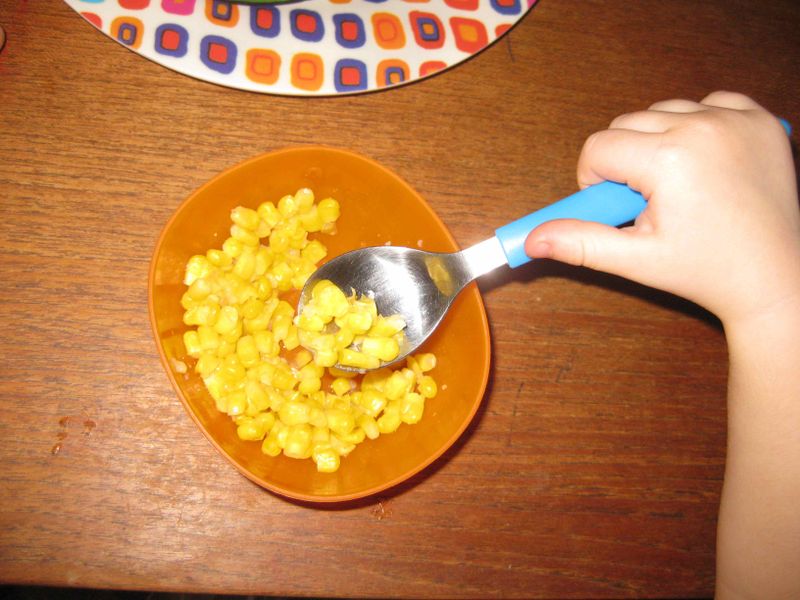 For the most part, cooking for kids means introducing them to new foods and flavors. Occasionally, it works the other way around. The introductions are not always pretty when they are being handled by a two-and-a-half-year old, but they happen nonetheless.

Sunday afternoon, Santa Maria was out at yoga and Nina was wrapped up in bed nursing an ear infection. Pinta was in great spirits, playful as could be. I wanted to leave Nina in peace and to get dinner started, so I asked Pinta to help me in the kitchen. She was eager to join me, and as she turned to head for the kitchen, she ran smack into a door jam. Bam, she had a shiner on her head and she was crying like crazy.

I dashed to the freezer for a cold pack. We don't actually have cold packs, so we use bags of frozen peas and the like. They're more tasty and they work just as well. This isn't the first time that Pinta has encountered the sharp edges of our apartment and had the resulting lump treated with a bag of organic garden peas. She knows the drill. She also knows that she likes to eat frozen peas, something I had forgotten.

I was holding her in my lap with the bag pressed to her head, and she said "pea, pea, pea." Usually when she says this word it would be spelled "Pee," as in "I have to pee." So I asked her if she needed to go to the bathroom. She said no."Pea," she repeated. Finally, I understood. She wanted to eat some of the frozen vegetables.

Her head was feeling better, so I gave her some of the peas. When I first went to the freezer, I had also grabbed a bag of frozen corn, so I had those in my lap, too. I gave her some of the icy golden kernels. She liked them as well, and feeling friendly, she wanted to share some with me. I think I like cooked corn better.

Later that night, when I was roasting chickens for dinner, Pinta helped me to dump some corn into a sauce pan and cook it. I coated the kernels in butter and salt and she gobbled them up. I'm always happy to introduce a new vegetable to one of my girls, and I'm looking forward to eating it off the cob with her come summertime.

Besides the chicken and corn dinner, I haven't been cooking much over the past few days.  It's impolitic to go into the reasons for this at present, but some of them have to do with our living situation, which has become much more stressful in recent weeks, and some of the other reasons have to do with the season. Thanksgiving means family, and that means a roiling of the psyche. Real estate stress plus family stress is very distracting, to say the least.

I've been cooking less over the past week, but we've been eating the same. Who's been doing the cooking? Santa Maria (see fight, above).  Her parents stayed with us for Thanksgiving, and went with us to my mother's house for the holiday. She cooked for them, the kids, me, and any other blood relation within ten yards of her. She was relentless. I was impressed, as she was also doing multiple loads of laundry and tending to the kids. Why I became resentful is good fodder for this week's therapy sessions.

But before things went south between Santa Maria and myself, I was on the receiving end of a delightful dinner. The first night her parents visited, I had to work late. She whipped up a flounder and shrimp dish as good as anything I'd ever tasted in New Orleans, a culinary capital of mixing shellfish, white fish, and heavy sauces. (She also make luscious homemade chocolate pudding, in the time it took me to put the kids in their pajamas).

The roots of her dish, which she improvised that evening and which combined shrimp, flounder, and a tarragon-cream sauce in a heavenly fashion, stretch back not to the Big Easy, but to Europe and a childhood memory of hers.

"When I was a little kid, about eight years old," Santa Maria later told me,"I went with my family on a canal boat down the Thames, and we docked in a little town once where there was a place called the Rose Revived Inn. They served a local founder called plaice prepared in this fashion, and it was the only fish dish that my mother ever liked, so I recreated it from my girlhood memory to welcome my parents to town for Thanksgiving."

Santa Maria enjoys eating well but also fitting into her pants so she created a rich-tasting sauce while minimizing the amount of butter and cream (though this is far from a calorie-conscious dish).  There is considerably less butter and cream than in similar dishes.

Santa Maria's mother, who usually doesn't like fish, loved it so much that when she was done with her plate, she scooped the leftover sauce out of the skillet with her baked potato skin. Little kids can really come through in the kitchen, once they get a little experience.

Here's the flounder recipe. Tune in at a later date for her luscious chocolate pudding recipe.

Mix the shrimp with the nutmeg, cayenne, and salt.

Heat 1 tablespoon of the butter in a frying pan, and sauté the shrimp.

Set aside the shrimp and keep warm.

Add shallots and remaining butter to pan, and sauté until they are soft.

Dredge the flounder in the flour and sauté on both sides until cooked, about two minutes per side.  If you use a large skillet, you can probably fit all four fillets in at the same time.

Set aside and keep the cooked flounder fillets warm.

Deglaze the pan with the wine.

Pour in the cream, and add the tarragon and cook for about three minutes.

Assemble the dish by putting the shrimp on top of the flounder and pouring the sauce over everything. Serve immediately.