There's BPA In My Daughter's Soup? 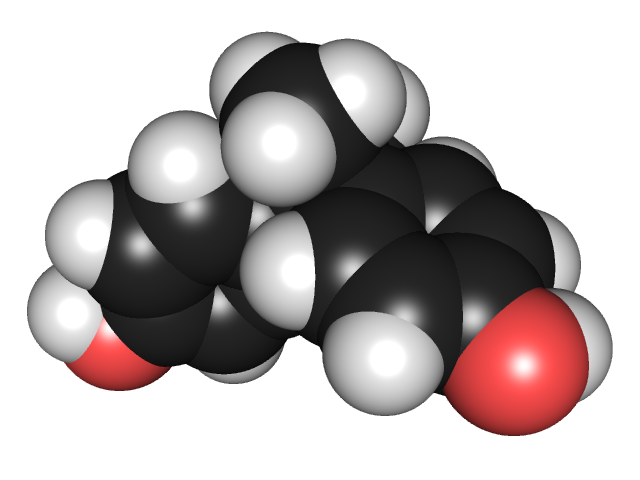 On Sunday, The New York Times disrupted my menu planning. One of the key things that I’ve relied upon to get me through the week is Progresso’s canned lentil soup. I feel like I might sound like a housewife in the fifties by saying this, but it felt to me like a miracle food. My daughter Nina is crazy for it, and it’s very healthy (aside, perhaps, from its sodium content).

Whenever I heard Nina say it was her favorite food, my heart both sunk and soared. I was sad that she didn’t favor one of my home-cooked meals, but I was delighted that she found such a nutritious dish so tasty.

Now, I learn, according to Nicholas D. Kristof , it is nearly poison. The issue is Bisphenol A, or BPA, a synthetic estrogen that is common in certain plastics and that has the nasty potential to disrupt developing endocrine systems.  BPA is not in the soup when they make it, but it is in the epoxy used to line the cans. It then leaches into the food.

The science on this isn’t conclusive. Something called the Business & Media Institute calls Kristof’s article scare mongering. But then again, they led another story with “Somewhere in our office are old bumper stickers proclaiming: “Proud Member of the Vast Right-Wing Conspiracy.”

No matter what the pundits say, when it comes to kids just a hint of danger is enough to change behavior. So for the time being, we’re dropping the soup from our weekly rotation. I’m going to miss it, as is Nina.

What I'd really like is a statistical analysis of the risks of BPA versus the benefits of getting the out-of-season nutrients that canning provide. As someone at risk for prostate cancer, I'm interested in as much lycopene as I can find. My primary source is canned tomatoes. I'm not ready to give them up.

There's another possible solution—having the government get the chemical out of the food (though this is, apparently, not without its risks; swap out the epoxy and invite botulism). None the less, there has to be a better technological solution. In the meantime,  bills are before congress to ban the chemical from food containers. I’m going to get in touch with my senator, Charles Schumer, who is one of the sponsors of one of them.

Another Sunday Night Dinner is Suddenly Something New 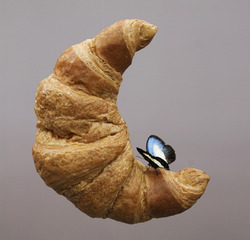 Earlier this week, Santa Maria took a business trip to Philadelphia, and we went with her. A highlight of the trip was a visit to the Franklin Fountain, a sweet-toothed locavore’s paradise known for its handmade ice cream, well worth a visit no matter what time of the year.

Since getting back, we’ve been very busy, and I haven’t had much time to cook. One of the things that keeps us going is the social hamster-wheel—a friend’s dinner party here, an other’s child’s birthday party there. A nice thing about this schedule is that it saves me the trouble of cooking—most of my friends are very skilled in the kitchen.

Then there is the gravitational pull of culture and fine art. This afternoon we went to the New Museum to see the Urs Fischer installation. My favorite piece (and Nina’s): the floating croissant and butterfly sculpture. Pinta’s favorite: the levitating cake, athletic bag, and subway-seat sculpture. Santa Maria's: the tongue that shoots out of a wall. Then, we went to a party thrown by the Mario Batali Foundation, which raises money to help children in need. Dan Zanes played a set and delicious cupcakes were enjoyed by all, but the next thing I knew, it was Sunday night and I was facing dinner for four.

Cooking for the family never really leaves my mind, so it wasn’t as if I didn’t have something ready. Before leaving for our trip south, I had dashed to the store and purchased a pack of chicken thighs. They are the center piece of one of my standard weeknight meals. I sauté them in a cast iron pan with salt and pepper until they are crisp and brown, and serve them with rice, spicy steamed spinach, and my black beans, which I defrost and top with a bit of grated cheddar.

I had this meal ready in about a half-hour. What I wasn’t ready for was the reaction: Lord knows when, but Nina has decided that she hates my black beans. Hates them. In what I assume is a foreshadowing of her teenage years, she said, “they’re boring. So boring.”

My black beans are many things, but they are not boring. Still, Nina could not be persuaded otherwise. She just wanted the chicken and the rice. I told her she had to have one more thing, either the black beans, or the spinach. I figured she’d opt for the black beans, but she out witted me (another foreshadow of the teenage years?), and said she’d have the spinach—provided she could douse it in soy sauce, which she discovered the other day when I served fried rice for the first time.

I was upset that she didn’t want my black beans, which to be clear she’s had countless times before and enjoyed, so it was momentarily hard for me to see the genius in her approach. Chicken, rice, spinach, and soy sauce? What’s wrong with that? It’s nearly a perfectly balanced meal. Maybe she was giving me her first recipe.

It didn't quite work out that way She wanted each of the items in a separate dish, not mixed together like some kind of junior Asian stir fry. And in the end, she combined the rice with grated cheddar cheese, a dish fit for a four-year old, but not one I can recommend to others (despite her helpful critique of the dish, which “had to much rice in it”).

Still, this was the start of her bona fide culinary exploration. I praised her for taking the things I’d prepared and combining them in new ways. One of the main goals I have as a parent is to get my kids to think for themselves. It looks like I’m well on my way.

My office isn’t really an office. The days of closed doors, private spaces, a little couch and wet bar, are gone. I work in a cubicle, a narrow pen lined up beside other narrow pens containing my colleagues, their computers, and their ambitions.

So it is pretty much known around my office that I like to cook. Occasionally, a friend will drop by to talk about what’s going on in his or her kitchen.

The other day I heard a most fascinating tale. A friend said that she likes to make a roast chicken on a Sunday night and eat just the crispy skin for dinner. Just the skin, and all of it. She’ll tuck into it just in time for the start of “Mad Men.”

Crispy skin is, of course, the holy grail of roasting a chicken, but I’ve long given up on eating it. With two kids to feed, it’s like stop-motion animation around my house getting the food to the table. It takes forever. I’m lucky if my chicken is still hot by the time I eat it, never mind if the skin is still crispy.

Recently, my friend and I were discussing ways of roasting a bird. She was telling me that she crosses the approaches of Julia Child (“butter ‘er up, stuff ‘er with lemon and sage”) and the Parisian restaurant Chez Louis (“start at a super high heat, then lower.  Baste with broth”). I don’t have much time for such refinements. I have only one trick to making a chicken-skin crispy, and it’s a sure fire one. I use it every time. I learned it from reading “D'Artagnan's Glorious Game Cookbook.” (D'artagnan, by the way, is a fantastic supplier of everything from chickens to the fanciest of wild game birds. You can learn more here.)

I told her to put the chicken in the roasting pan the morning before cooking and let it sit, uncovered, in the refrigerator before roasting it at a high heat, about 450 degrees. The skin dries out (“desiccated,” was her apt and wild-eyed description this morning when she stopped by to tell me it was “the best chicken ever”) and the skin gets wicked crispy. You can’t lose.

My favorite roast-chicken recipe is here. 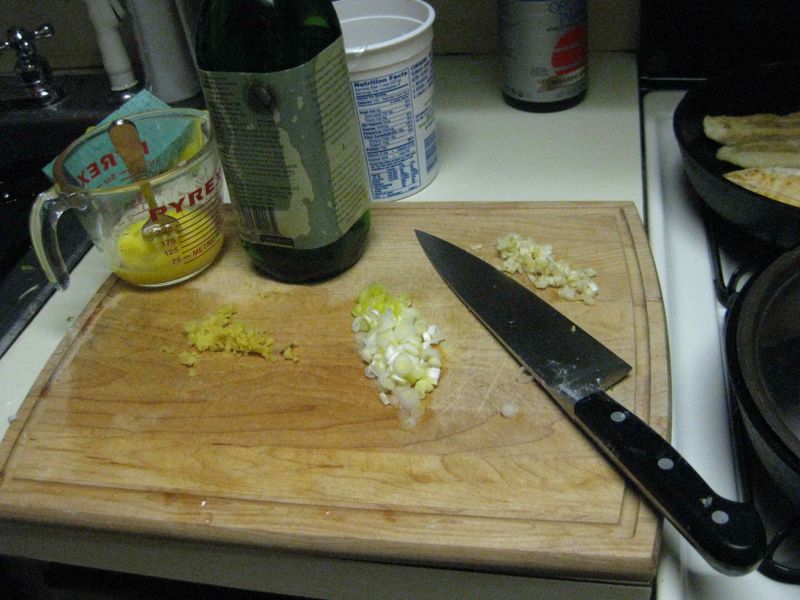 Yesterday was a very long day, literally. Daylight savings time ended, which for most adults means an extra hour of sleep, but not for those with young children whose biological clocks take a few days to reset. Pinta was up at 5:39 in the morning, and there was little that could be done about it. We were up too.

It was also a long day emotionally. A year ago, my father died after a long bout with prostate cancer. We spent the anniversary of his death in church upstate and then eating ham, poached salmon, and quiche with my extended family. The death of one’s father, no matter how expected, is a roiling event that both defies discussion and spurs expression. Yesterday, there was a lot of reminiscing, some arguing, and an opportunity to connect with the living. I don’t get to talk very often face to face with one of my brothers, who lives in Pennsylvania, and I was glad to see him.

Faulkner said, “The past is not dead. It’s not even past.” The same could be said of the dead. They’re not past. We remember them in ways large and small. In my father’s case, it’s in small ways such as looking up the aisle at church or watching the New York Jet’s play on the television, and in large ways like looking up the aisle at church or finding it difficult to plainly reveal one’s emotional state. I’ll take a stab at the latter. Yesterday was draining.I was sad, angry, morose, and probably a half-dozen other things I've yet to articulate.

We left upstate early and returned to the house before dark. After a quick dash to the playground for some fresh air, we headed back inside. I started to cook dinner while the girls played. I had a pound of flounder and a head of asparagus and a questionable lack of plans for a starch.

The best I could come up with was mashed potatoes, which for reasons that flummox me, the girls don’t really like. I didn’t actually feel like making or eating mashed potatoes, but I needed something to go with the fish and the vegetables. Somehow, I thought of fried rice. I have never made fried rice before, but how hard could it be?

There were about two cups of rice already cooked in the refrigerator, and I had three old scallions that it would be a potentially poisoning crime to serve anyone without cooking them first. I looked in Mark Bittman’s “How to Cook Everything” and took careful note of one detail. He said it would take twenty-minutes to make; less, with pre-cooked rice. I was all set.

Nina was excited for dinner. She wanted to help make something. The asparagus was cooking, the fish kind of takes care of itself, and the rice was well underway. There wasn’t any easy task for her to handle. She loves to set the table, though, and she seized on this idea. She even wrote and cut out place cards with everyone’s name. And she and Nina loved the rice. It was the easiest and most relaxing dinner in a long time, a perfect antidote to a challenging day.

Heat the oil in a large frying pan or wok.

Saute the garlic, scallions, and ginger for about a minute.

Clear a spot in the center of the pan and pour a bit of the egg on the surface and continue to stir.

Repeat until the egg is used up and mixed in with the rice.