My First Time Baking: A Recipe for Pear Upside-Down Cake 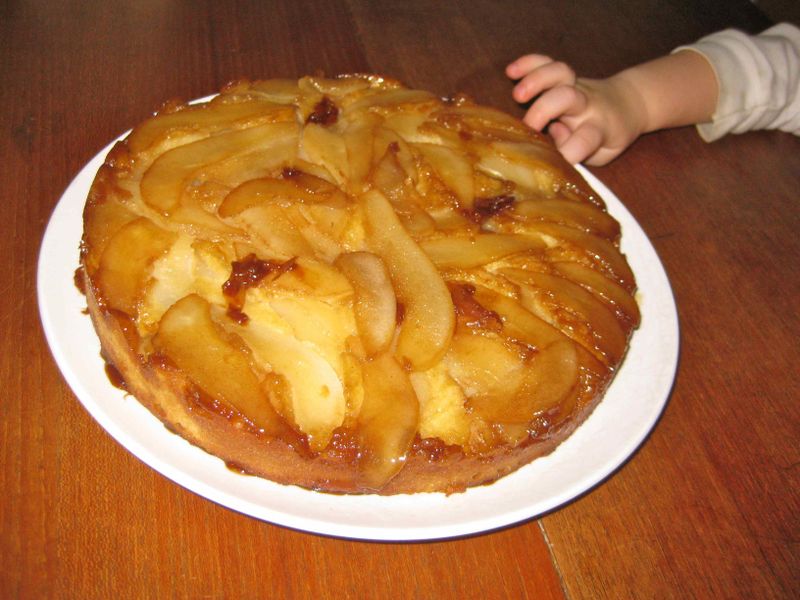 I don’t have many memories of my mother baking, which is not to say she didn’t do it ever. Though as Santa Maria says, who could blame her if she didn’t—she had five kids to care for.  I recall her making Christmas cookies with my sisters, and she successfully passed the female baking baton off to them. I owe most of my memories of baked goods, including snickerdoodles, butterscotch brownies, and lemon-meringue pie, to my sisters.

My mother stuck to making Irish soda bread, and someday I’ll share the recipe (as soon as I get her permission). She makes a new world version with less butter, and no caraway seeds (she was the eldest daughter in a family with five daughters and one son, my delightful uncle John. As a boy, John didn’t like caraway seeds so no one else got to eat them either).

One thing I do remember my mother making is pineapple upside-down cake, which was a syrupy and sweet dentist’s nightmare. If I close my eyes, I can still see the caramelized yellow cubes of fruit and taste the brown gooey bits of sugar. I loved it.

On Wednesday last week, Mark Bittman wrote in the New York Times about a variation on the pineapple upside-down cake, using maple syrup and pears instead of plain sugar and the Hawaiian fruit. I love pears and I was enticed to consider making it.

Santa Maria is correct in thinking that my mom was too busy to bake when I was young. Her mom, Jane, is a relentless baker even at eight-six years old—she has pies and cookies in the freezer every time we go to visit—but she only had two children. My mother was busy making school lunches, breakfasts, and dinners seven days a week. Seven days a week! We hardly ever ate out, and I’ve never once had a frozen dinner. She did an astonishing job.

I’m tired from cooking for just two kids, and I serve them frozen fish sticks three times a week. I basically want for my children what I had growing up—home-cooked meals and a balanced diet.

On his video about making the cake, Bittman talks about how little patience he has for the details of baking. Santa Maria is not known for her patience, but she is a seasoned baker with very particular tastes. She took one look at his recipe and made a few adjustments. I defer to her in all dessert-related matters, and, the truth is, I didn’t feel confident. I was happy to have her guidance. (She threw out the maple syrup, which she said she didn’t like the taste of in baked goods, and she twiddled with a few of the other proportions. She typically reduces the amount of sugar by at least a third.)

Cooking is easy for me because I’ve mastered a few basic techniques and I stick to them. I can take on new recipes fairly confident about how they’ll turn out because I’ll pick ones that build on these basic skills. Baking is another question. I’ve never been interested in doing it because I’ve been preoccupied with my needs and not my desires. I need to eat, and I need to eat well. Not too much sugar, and more daily calories than a high school football lineman would consume in a day. That takes a lot of work.

But as I’ve gotten better at managing the day-to-day cooking (and as my metabolism has slowed a bit), I’m starting to think about my desires. A slice of cake after dinner sounded mighty good.

I enlisted the help of Nina and Pinta, although once my eldest heard that there were pears in the cake, she said that she would only help make it if she didn’t have to eat it. She hates fruit that much. She is a fruitophobe.

I got the process underway by gathering all the ingredients. I put the kids in the kitchen with the laptop and let them watch Bittman’s video over and over. Pinta kept saying “upside-down cake.”

Soon, it was time to cream the butter and the sugar. I squatted on the floor of our kitchen with Nina at my side. I had the mixer going in my right hand.  A stick of butter stood rigid across the bottle of the steel mixing bowl. Sugar was sprinkled about. The blades of the mixer dug into the butter, and started throwing off curled clumps. The more I pushed into the butter, the more the hand mixer protested. Nina was crouched next to me. She thought it looked like popcorn. She liked the way the curled bits of butter were jumping all over. I was concerned they’d jump out of the bowl. It felt like a humbling process, but that’s just because I hadn’t done it before, and I wasn’t confident that I was doing it correctly. It certainly didn’t look like I was doing it right.

Santa Maria said that she would have let the butter soften up. I wish she had told me that earlier, I thought. Pinta had been playing with the stick of butter and I took it away from her because she was softening it up. I could have let her play to her heart’s content.

Santa Maria taught me about combining the dry ingredients with the wet ones, and soon enough we had a cake. She adores a pear tart dessert at our favorite local restaurant, Al di La. It has chocolate in it, so, at the last minute, she stuck some pieces of dark chocolate in one corner of the batter.

Nina asked if the work was done, and then said she was going to lie down (she’d been running a fever all day). I started to make dinner—our seafood feast.

After the cake was in the oven, the kitchen started to smell very nice. It smelled like a cake was baking. Is there a kinder, more nurturing scent out there?

We all loved the caramelized pears on top, but Santa Maria thought the chocolate was too bitter. Next time she would make it with semi-sweet chocolate. Nina didn’t eat any because she was too sick. Pinta had so much that her stomach ached. I downed two pieces and enjoyed every bite. Then I got a headache from the sugar.

Later that night I had to barricade Santa Maria from the kitchen because she was sneaking leftovers. She’s powerless over sweets and I knew drastic action needed to be taken. I quickly called up a dear friend who lives nearby to offer her some (she said that we were laughing so much on the phone that she thought there was alcohol in the cake) and then I left some more on the doorstep of our downstairs neighbors. They texted me the next day to say they found it upon coming home after a few drinks and that it was a pleasant surprise. They said they loved the Guinea Pig role.

Not a bad outcome for my first cake, though to give credit where credit is due, it was a success because of Santa Maria, who helped to make it, like all the good and sweet things in my life, possible.

Adapted from Mark Bittman, whose original recipe is here.

Bring to a boil and cook for two minutes.

Remove from heat and pour the mixture into a 9 ½ -inch baking pan.

Arrange the pear slices in the sugar mixture as you see fit.

In a mixing bowl, beat the remaining butter (one stick) and the sugar with a mixer until it is light and fluffy.

Add the vanilla and eggs and mix until smooth.

In a separate bowl, combine the flour, baking powder, and salt.

Combine the wet (butter) and dry (flour) mixtures in three batches with the milk. And mix until barely combined. Do not over mix. Lumps are okay.

Carefully spread the cake batter on top of the pears using a spatula.

Bake in oven about 45 minutes, until top is golden. A thin sharp knife stuck in the cake should come out clean.

Run a knife around the edge of the cake pan.

Put a plate on top of the cake and carefully flip it so the plate is on the bottom and the pan is on top.

Serve warm or at room temperature.

Note: Fold chocolate pieces into the batter before baking for a slightly richer cake.