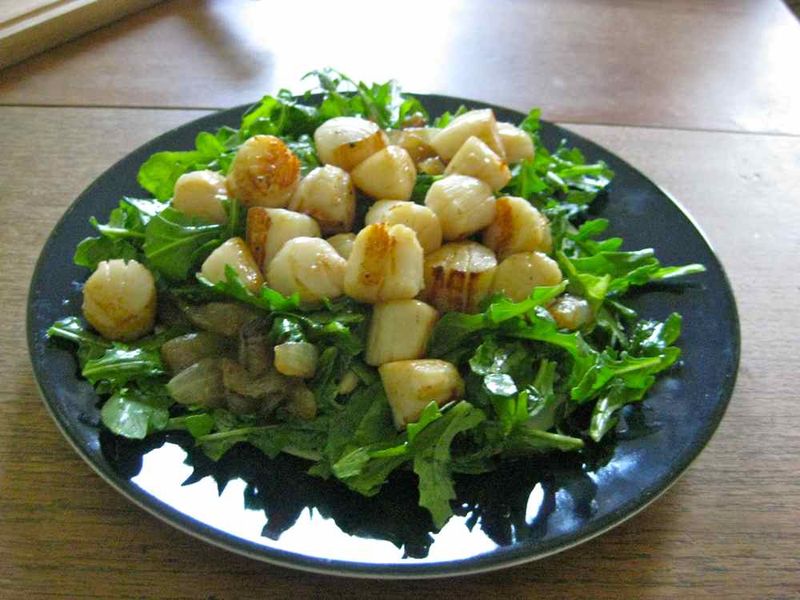 Saturday morning I was grumpy about all the work I had do to. Domestic work. The pile of laundry was knee high. The weekly food shop loomed. These things would have to be taken care of, and the number of leisure hours available to me was rapidly dwindling.

The food shop could wait. Taking care of myself could not. I've learned the hard way (cf: therapy bills, etc) that if I don't tend to my own needs, there's a price to pay. So I went out for a run in the park, and on my way there, I threw the soiled clothes in the laundromat up the block.

After a cathartic workout, I stopped at the Green Market to buy fish. I don't often run, but it works wonders on my psyche when I do. Out of breath and sweaty, I was full of good spirits. In that mood I tend to start dreaming of buying loads and loads of fish and inviting everyone I know to dinner. My run had been good, but not that good (it was short for one thing--that laundry needed to be put in the dryer), so I checked that impulse and kept to my original plan. I had my eye on our usual weekend meal--white clam sauce and sautéd flounder. I buy my seafood from Blue Moon Fish. Years ago, I worked in a retail fish market, and I know how to spot quality fish; Blue Moon's is unusually good. Typically, there's a long, meandering line of stroller-toting dads, young couples with coffee cups, and other devoted seafood eaters snaking halfway across the asphalt of the Greenmarket like some kind of Great Wall of China. On Saturday, though, there wasn't any line. I felt lucky, and when I  spoke to a clerk and saw that they had real Peconic Bay Scallops, an extremely rare treat, I felt luckier still.

Small and sweet, Peconic Bay Scallops, from the namesake body of water on Eastern Long Island, were once relatively common. When I was working in that retail fish market in the eighties, the scallops were one of the things we carried in our gleaming display cases. During their season, a guy named Peter, the head of one of the store's wholesale accounts who was permitted to mingle among the staff, used to walk up behind the counter, where I stood as one of the clerks, and reach into the display of scallops and pop them into his mouth, raw. This was well before the vogue of sushi, and I was always shocked. He would swear that they were the best that way.

Peconic Bay scallops have nearly disappeared since I hung up my seafood smock. A mean brown tide, which is a toxic algae bloom, swept through Peconic  Bay in the late eighties, devastating the stock. The brown tide has since waned (no one really knows why) and efforts to restock the bay are bearing fruit. This year's harvest promises to be the best in years, according to a recent article in the New York Times. I was beside myself with delight walking home with half a pound for lunch. I picked up a fresh loaf of French bread and some arugula to go with them.

Santa Maria had to go to a meeting, so I ate alone with the kids. I took the scallops out of the refrigerator and told Nina and Pinta that if they were very lucky they might be able to have one. Nina grabbed the plastic bag of scallops out of my hand and pretended to keep it from me. I acted horrified. Terribly horrified. I don't think they've seem me react this way to a joke about food. I thought it might entice them to try one. It didn't, which was just fine with me.

I heated chicken soup that I had on hand for the children and started to consider my lunch. I wanted to leave the scallops in their sweet and simple glory, but I wanted a full meal. I wanted them over the fresh arugula, but that felt a bit too summery to me. Caramelized onions, I figured, would add a bit of warmth. All it needed, I thought, was one more note. Toasted pine nuts would give it a savory flavor and a bit of crunch.

Getting this all together while feeding the kids was a bit like being in a Marx Brothers movie. Back and forth from the kitchen to the dining room I ran. Caramelizing onions is always a bit of hit or miss for me. I didn't have time to think about it, though, so I heated the cast-iron pan, added some oil, and threw in slices of onion. I bashed the onions with a spatula to break them up, covered the pan, and ignored it. Every so often I'd give it a shake or stir, until the pan was smoking and they were in danger of burning, at which point I turned off the heat, and really ignored it.

I served the children their soup, and started to put together my salad. The kids seemed content, and I poured myself a glass of white wine. I took my wine and my salad to the table, but tasting the scallops became another Marx Brothers comedy. Pinta was exhausted and she nearly fell asleep while eating her lunch (or more accurately, not eating her soup). I kept her from falling over, and was able to take one bite of the salad. The scallops were warm and they bounced in my mouth. The pine nuts crunched beneath my teeth. I took and other bite, and, hurriedly, another. But I knew that Pinta really needed to be put into bed. I got up and took care of that. I sat back down with Nina, who had finished her soup and was happily eating slices of French Bread. I had two more bites. Then Nina announced that she was ready for bed. I got up and got her dressed, and put her into bed.

Finally, I sat back down. I had three bites left. A perfectly equal amount of arugula, onion, pine nuts, and scallops. I had my wine. I had a slice of freshly buttered bread. I ate them all, and then wondered where the rest of my lunch had gone. Had I really eaten it? Was it as good as I hoped it would be? Was eating it quickly, in fits and starts, anything like the way Nina and Pinta's childhood is passing? Would I miss that as soon as it was over, and wonder what had happened to it?

Heat some oil in a frying pan, preferably cast iron, and add the onion, stirring occasionally.

Cover the onions, stir every so often.

When the pan is so hot that the onions are at risk of burning, turn off the heat and let the onions sit, covered. There will be enough heat in the pan to sweat them sufficiently. If not, repeat the above steps a bit more rapidly.

Heat a second cast-iron frying pan and sprinkle the pin nuts on its surface. Shake and move the pan about until the nuts brown.

Remove the nuts from the pan, set aside

Wash the arugula and place in a bowl.

Heat the cast iron pan that was used to toast the pine nuts.

Put some oil in the pan.

Dry the scallops on paper towel and toss in pan.

Sear them about thirty seconds on one side, and thirty on another, keeping in mind that they don't really have to be cooked at all. (I only like them with a nice brown crust, though.)

When the scallops are reasonably browned, have swollen but not given up their liquid, remove them from the heat.

Toss the arugula with olive oil and white-wine vinegar.

Add the pine nuts to the arugula, layer a bit of the caramelized onions on it, and top with the cooked scallops.