Why Pay for Pizza? 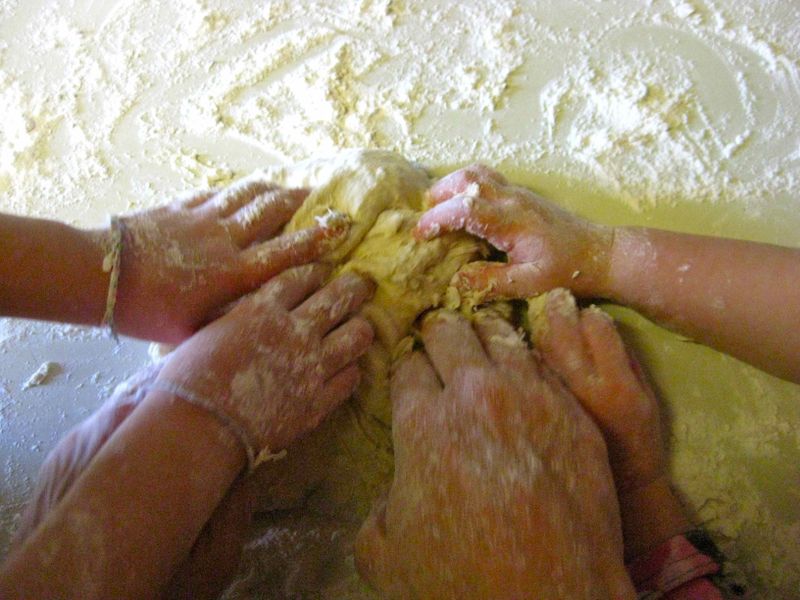 Pizza is perhaps the perfect food. It makes for cheap night out with next to nothing to clean up (other than the kids). It is fairly nutritious (lycopene, anyone?), and children almost universally love it. There’s just one catch, as I discovered today—for all of its appeal to be evident, it must be made by a professional.

This afternoon, a friend from Manhattan and her young son stopped by before dinnertime for a quick visit. They had spent the day at the Brooklyn Botanic Garden. We had spent the day getting ready for dinner, which Nina announced as they were leaving. “We’re making plain pizza for dinner,” she said.

I overheard her and was torn. Should we have invited the boy and his mom to stay for dinner? Maybe. I would have liked their company, but I hadn’t planned on their coming over and I didn’t think I had enough food to offer. So I didn’t say anything, and it turned out to be the best decision. Not because there was a shortage of food, but because the pizza was terrible.

For father’s day earlier this year, Santa Maria gave me a pizza stone. I had asked her for one after reading in the Sunday New York Times Magazine an enticing account   by Sam Sifton about making pizza.

The stone has sat at the bottom of our oven since June, but this morning, Nina asked me “When are you going to make pizza?” I’ve been looking for dishes to cook with the children, and it occurred to me that pizza, with the messy dough and the drippy tomatoes and the bits of herbs, was a perfect thing.

This conversation took place at about seven in the morning. Santa Maria was asleep. I went to the computer and looked up Sifton’s article on the Internet and found his recipe for pizza dough. I read it closely to see what I would need to buy.

A few things posed a problem. Bread flour, was one. I had no idea what that is. Santa Maria, though, has done her share of baking, and would be able to help decode that mystery. Sifton said the dough needed to be made the night before, but that the morning was okay. It was early enough in the day, so we were still in business. A larger challenge loomed, though. His recipe called for a standing mixer. I didn’t have one of those.

I was sitting with Nina and Pinta on a bench in our kitchen, with the computer on my lap. What to do now? The online version of his article comes with a charming video tutorial. Kids love videos. So we watched it together. It tells you what to do if you don’t have a standing mixer: You can knead the dough. Problem solved.

When Santa Maria got up, I told her about my plan to make pizza from scratch. This idea made her want to go back to bed. After a cup of tea, and a walk through the park, though, Santa Maria came around to the notion of making the pizza. We made the dough before the children’s naps, to give it time to rise. Nina and Pinta enthusiastically measured the flour, salt, oil, and other ingredients. Everything was fine until the yeast and the water went into the mixture. Then, I started to panic.

Santa Maria proved her commitment to the project (and to me) by fending off my shouts to review the recipe and the video. She calmly dusted the countertop with flour and gave a quick tutorial to Nina, Pinta, and myself on the finer art of kneading.

Our fingers were sticky with dough and flour covered the floor, the girls’ dresses, and somehow, the chair in the next room, but eventually we had a nice ball of dough. It smelled remarkably fresh and delicious. I started to think about buying a standing mixer. Wouldn’t it be nice to make this all the time? We napped and the dough rose. Later, I started to actually make the pizza.

In college, I worked in a pizzeria and I know how to toss the dough in the air. With my children beside me, I relived my undergraduate days. It was a great show, but soon I had stretched the dough until it was much larger than my little pizza stone and wooden peel. I folded the dough over itself and fit it on the wooden surface. Mistake number one.

Together we spread the tomatoes and cheese on the dough. I slid the pizza into the oven without incident and felt a happy tingle of anticipation. I had been anxious about the pizza sticking to the peel, so I had covered it with extra flour. Mistake number two.

As the pizza cooked, the kitchen started to fill with smoke (that extra flour started to burn the minute the pie went into the oven). Before I could deal with the smoke, I realized that I didn’t have any way to get the cooked pizza out of the oven. My pizza stone came with a wooden peel, but not with the thin metal thing necessary to slide under the cooked pie and pull it from the heat. Mistake number three.

According to the recipe, we had seven minutes to come up with a solution. I wielded a spatula. Santa Maria stood by with a baking sheet and a ceramic plate (as small as the pie was, it was still wider than the largest baking sheet we had). Eventually, we pulled a delicious-looking pie from the oven.

We sprinkled it with fresh basil and grated Parmesan, and brought it to the table. The girls were waiting with their little knives and forks. We sliced up two pieces each for them, and that’s when the futile nature of the whole enterprise became evident.

Pinta didn’t like the tomatoes. Neither did her older sister, who kept calling them “the orange stuff.” Soon neither one of them was eating anything.

Santa Maria was suspiciously silent at her end of the table. There’s a silence when people are eating that’s good. It means they are so interested in their food that they have forgotten to talk. There are usually a couple of periods like this during every dinner party. This was not one of those silences. This was more like a “I don’t know how to find the words to tell you, dear husband who spent nearly the whole day involving the family in this lark, that the pizza tasted like something I can’t say in front of the children.”

I went back into the smoke-filled kitchen to redeem myself with another pie. I told Santa Maria that she would like the next one I made better. “That wouldn’t be hard,” she replied.

The first pie had been plain and the crust too thick and floury. I halved the amount of dough, doubled the tomatoes, added fresh mushrooms and garlic. I was going to make a thin-crusted masterpiece. Into the oven it went. When I tried to take it out, I pulled a hole in the center and was left with what could charitably be called a donut.

The kitchen was a flour-covered mess. The sink was full of dirty dishes. No one had been fed. I told the kids that next time we have pizza we'll go out for it. And I told myself, that at least I won’t have to spend any money on a standing mixer anytime soon.