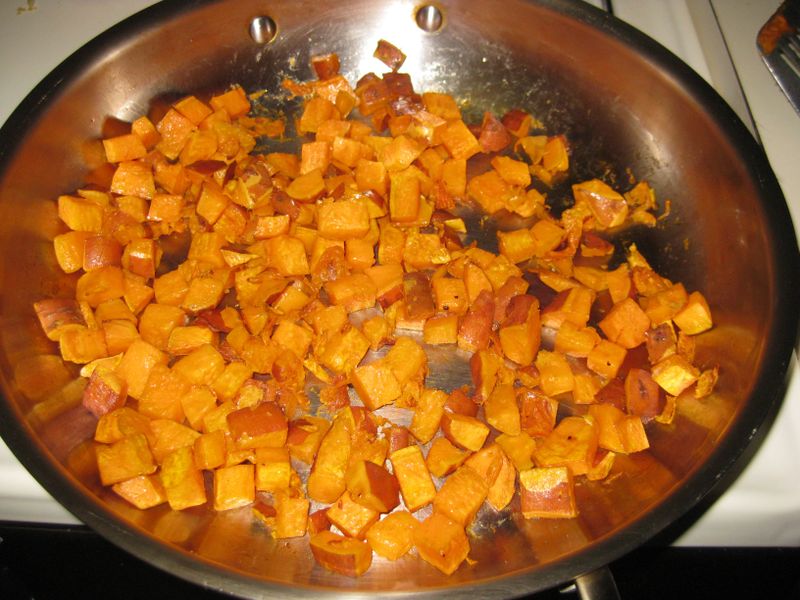 I’m a writer and an editor by trade, and as a consequence, I spend a lot of time in my head. It’s my job to trade in ideas and concepts. It can be hard to know, though, how those thoughts match what is going on in real life.

However, to get roughly the same amount of cooking done, I’ve shifted my prep work and other tasks to the night before. So, even if I’m literally spending less time in the kitchen, I’m doing it more often, which makes me feel like I never leave the sink, counter, and stove.

I come home from work, eat dinner, and, even though I’m full and it would make more sense to flip on the television or open a book, I start cooking again. The shift in how I make my quinoa salad is a good example. While I’m doing the dishes, I’m simmering the grain. By the time I’m done with the clean up, it’s finished. That saves me about ten-to-twenty minutes the next day. All that’s left to do is to chop some vegetables, which is something I can do in my children’s company.

I’m so in love with quinoa that I’ve started to use it in a new salad. Like many of my recipes, this one comes from Mark Bittman (Today’s New York Times report on the closing of Gourmet magazine had a great lede, “It’s Rachael Ray’s world now — we’re all just cooking in it.”; I don’t know about Rachael Ray, but I do feel like I live in Bittman’s world).

I’ve been making this sweet potato and quinoa salad for a few weeks now. I’ve varied Bittman’s recipe slightly. He calls for boiling the sweet potatoes. I roast them, to concentrate their flavor. I chop and roast them at night to use the next morning, just like the way I now prepare the quinoa itself. I don’t bother to peel the sweet potato and I prefer the salad with a white-wine vinegar, but that might just be me.

In my head, I think about my cooking in very grandiose terms. I’m not just making meals for my family, I’m running a small, exclusive restaurant. Its clientele is very special and very dear to me, and one of the terrible ironies of my opening this restaurant is that their very patronage makes it harder and harder for to keep it up and running.

When my children were infants, cooking was a guilt-free way to avoid dealing with their physical and emotional demands. I discharged my domestic responsibilities with a creative flair that kept me satisfied and fed me and my family. I would even get a pat on the back for being the dad who cooks.

Now that they’re a bit older and aging at what feels like an exponential rate, standing in the kitchen leaves me feeling like I’m missing out on their growing up. It’s an exaggeration, of course, (we spend time together in the kitchen and eat meals together), but I am feeling the pressure to manage my time more carefully.

I don’t plan on shutting down the restaurant in my mind, but I might have to expand my staff. I have an idea that I know just the young folks to hire.

Preheat the oven to 350 degrees

Cook the quinoa in 2 cups of water as you would cook rice, about twenty minutes

Chop the sweet potatoes into small squares, about a half inch each. Coat with a tiny bit of olive oil, salt  and pepper, and spread out on a baking sheet or in a large frying pan and roast in the oven until the           potatoes are soft on the inside and slightly crispy on the outside

Toss all the ingredients and dress with the oil and vinegar.

Note: dress only as much of the salad as you would like to eat in a given sitting. The remainder of the salad will keep  for days, so long as it is not dressed before consuming.