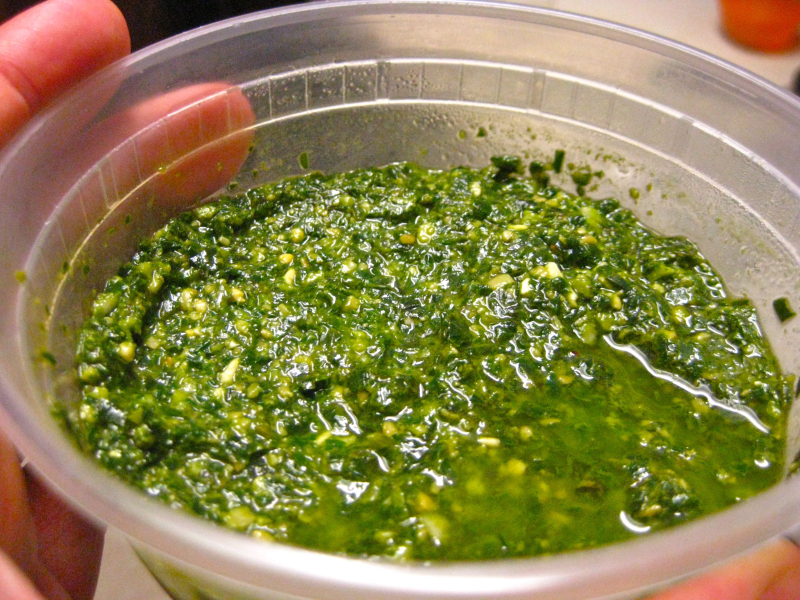 Nina starts pre-K in a few weeks, and this morning, the parents at her school had a picnic. We were very excited about this event and have scheduled our remaining summer plans around it. One of those plans included visiting the Abuelita this afternoon, which meant a harried morning getting ready not just for the picnic, but also preparing for an overnight stay, upstate. The idea was to hop into my late father’s Chevrolet right after the picnic and let the kids nap while cruising up the Major Deegan.

We weren’t that busy this morning, though. Santa Maria went out to yoga. I took care of the kids and got things ready for the trip, although not necessarily in that order. I had to make pesto.

I happened to mention this to Santa Maria before she left for her class. She shuddered and  heaved a sigh. The flag was up: a great, blaring non-verbal sign that I was out of my mind for thinking this way. She went further. Her eyebrows lowered, she said, “You might want to spend some time with your children. They really need you.” I replied that I would be spending all weekend with them, and thought to myself, “What am I missing here?” She left for yoga, and I was left with the feeling of having to choose between playing with the kids and cooking. I felt awful, because I knew which one would win out—the cooking, of course. I had a head of basil in the refrigerator that wasn’t going to last much longer.

Nina and Pinta I had fun getting packed. We stacked the beach towels, swimsuits, stuffed animals, and all the other things a young child might want for an overnight trip to the Abuelita’s (we were planning on visiting the town pool where she resides). Two-year-old Pinta earned my eternal gratitude when she reminded me to pack their swim shirts.

I read them books—“Wacky Wednesday” and a Clifford lift-the-flap book about Christmas. That last one was a little out of season, but in keeping with Nina’s choice of music this morning: Bing Crosby’s “The Voice of Christmas” collection. She loves “Jingle Bells.”

Then I started to make the pesto. Nina ran into the kitchen and asked if she could help me. “Of course,” I said, and felt relief spreading through my veins. I wouldn’t feel guilty about standing in the kitchen while they were left to their own devices. It would be a clean-conscious batch of pesto. No childhood neglect lurking in the shadows. Instead, a future-happy memory of standing counterside and tossing salt and pine nuts into a blender. Oh, what a happy day.

Pinta wanted to join in. Together, we measured pine nuts and toasted them in a cast-iron pan. Together, tossed the sea salt atop the washed basil. They took turns pushing the button on the base of the blender and sending the food-processor attachment blades whirring. Pinta kept repeating “not putting hands in there,” which is what she gleaned from my running narration about how dangerous the machine is.

We made it to the picnic, but we never reached the Abuelita’s. Nina got sick in the car a block from our house and we turned around, unpacked, and took it easy this afternoon.

Santa Maria went to a friend's house for dinner and Pinta and I ate pesto pasta with her before she left (Nina downed two bowls of plain pasta, so maybe she's getting better). Actually I was the only one to eat it: Pinta showed a distressing lack of appetite that made us wonder if she was getting sick, too. Santa Maria loved the pesto. She had a small bowl, and I caught her eating more in the kitchen, later.

Pick the basil leaves and wash them thoroughly. I soak and rinse them three times in a salad spinner, which I use to dry them.

Peel and crush or chop the garlic

Toast the pine nuts in a cast iron pan with no oil. Heat until they are brown.

Combine the basil, the pine nuts, the salt, and the garlic in a food processor or blender.

Add olive oil, and run through the machine until you have a sauce. This will require stopping every so often, opening the top, and scraping down the sides with a rubber spatula.

Notes: Pesto at this stage in the game freezes well. When you serve it, combine it with grated Parmigiano-Reggiano. Also, pesto is an open-source sort of recipe. Some call for walnuts. Others, like my brother-in-laws, incorporate a stick of butter. Feel free to experiment (advice that applies to all recipes, by the way)

Pesto Pasta with Chicken and Mozzarella

There’s no right or wrong recipe for this dish. Poach some chicken breasts, or fry up some boneless thighs, and chop. Or pick a roasted chicken. I happened to have some left over breasts and thighs on hand, and I liked the combined taste of those two meats. Chop the chicken and toss it with chopped Mozzarella and dress with the pesto over the pasta of your choice. My latest discovery is that whole-wheat fusilli is better than the regular pasta. Who knew?