A Squid Recipe: How Simple Can it Be? 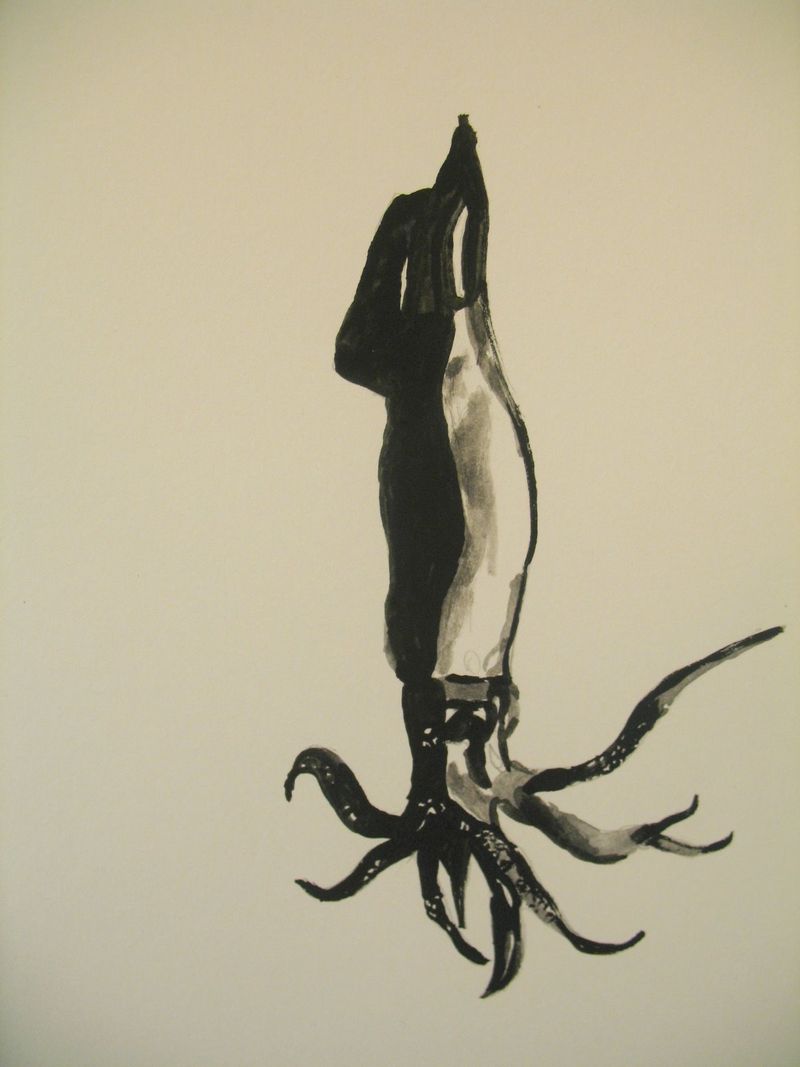 We were very busy that day. We had been invited to a brunch in the park. We had plans to see our dear old friends Vasca Nunez and de Balboa, who were just back from vacation. And there was a birthday party for a friend of Nina and Pinta’s to go to.

The plan was to hit the brunch in the morning, run to the birthday party, and then see Vasca Nunez and de Balboa in the afternoon.  I thought we might eat dinner together, so I had Santa Maria buy an extra two pounds of squid at the Green Market.

I have mixed feelings about squid. There are things about it that I love. One, it is cheap. Two, it’s not endangered. Three, it’s cheap. Still I have high hopes for it. Recently, I was reading Marcella Hazan and she inspired me to heights of foolishness.

My plan was to cook the squid up per her instructions for Tuscan squid with peas, omit the peas, and use the sauce (again, per her instruction) as a base for risotto. De Balboa is gluten intolerant, so risotto is always a good choice for him. Plus, both of my children like rice and I figured I had a pretty good chance of getting them to eat it.

De Balboa called on Saturday night, though, and said they were extremely jet lagged. They had just arrived that afternoon from France. He wanted to see if we could get together in the morning. I told him to call when he got up. We turn our answering machine on at night, and when I woke, there was a message from de Balboa. They had risen at 5:30 a.m. By the time we called them back, at 7 a.m., they were done with breakfast and ready to come over.

We visited with them in the early morning, went to the brunch, and then collapsed in the afternoon and napped until four pm. We never made it to the birthday party. And I had two pounds of squid to cook.

A little more reading of Hazan convinced me that it would be easy to fry it, something I had never done before. I also thought that Nina and Pinta would like it that way. I asked Nina if she liked French fries, a food cooked a similar way. Like a good litigator, I knew the answer to my question before I asked it. Yes she said. Later when I told her I was about to cook the squid, she asked, “Where are the French Fries?” I’m not sure what a good litigator would have done there, but clearly she misunderstood.

Santa Maria and I had our own misunderstanding about the squid. She thought I was going to cook a la plancha. I wanted to make a classic fried squid. Somehow, her dismissal of this idea upset me. The truth is, I don’t want to cook just for myself. I want to cook for her and for the kids. I didn’t see anyway the kids would eat it without a deep-fried crust.

Santa Maria and I squabbled and I gave up on the idea of frying the squid. (A quick consult of Mark Bittman’s fish cook book and its mention of the effort involved and the risk of splattering also helped change my mind).

I prepared the squid in a simple yet delicious fashion, without breading I have to admit, Santa Maria is right. The resulting flavor is pure squid. There’s no taste of oil at all.

Heat a cast-iron frying pan on high heat until it is nearly smoking.
Add oil and a half piece of garlic.
Swirl the garlic in the pan and remove as soon as it starts to brown.
Toss some sea salt in the pan.
Toss a layer of squid in the pan.
Keep the squid in one layer and let brown on one side.
Flip the squid with a spatula (or simply stir it with a spatula).
Continue to cook for a minute or so more.
Remove from pan.
Total cooking time will be just a few minutes.
Repeat until all the squid is cooked.

Serve with a salad or on its own with a bit of lemon. The rings will  not get crispy and brown like a classic fried squid, but there will be bits of browned edges and a refreshing, straight-from-the-sea flavor.

For further ideas about how to cook squid, see here and here.

A note on the above image: it comes courtesy of the fascinating blog Suspect and Fugitive, which features images, typically of actors, musicians, and other celebrities, made out "of suspect (questionable) and fugitive (non archival) materials," such as swiss cheese, mayonnaise, s'mores, and, yes, squid ink.