Ernesto Neto: The Spice of Life 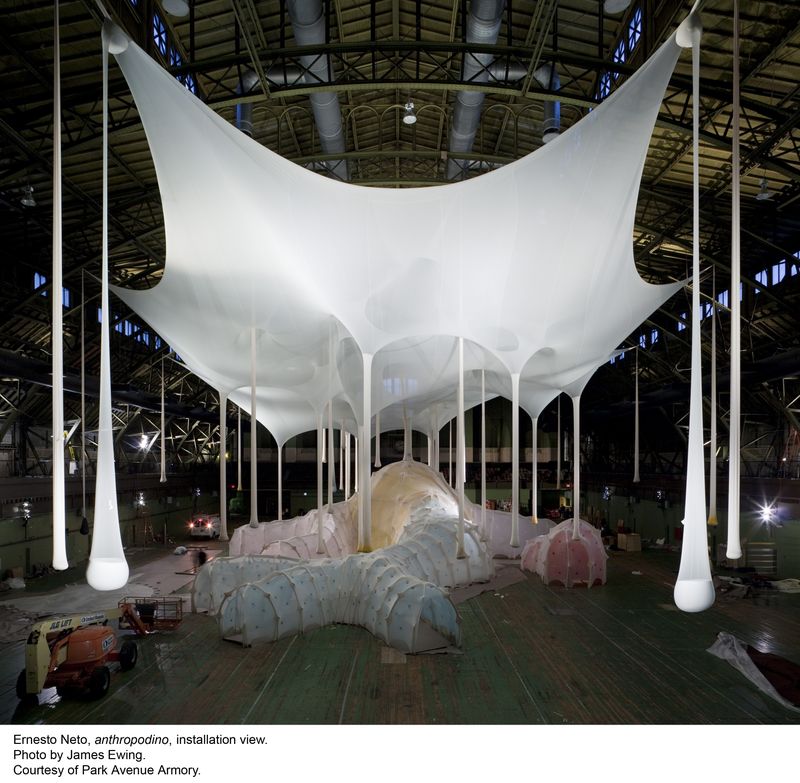 My kids love to smell herbs and spices. They stand on a table in my kitchen and point to the colorful glass jars resting in a rack on the wall. I take the jars down one by one, unscrew the top, and let them take a whiff. I’m very happy when they spend their time this way, and I wonder what they are thinking as they inhale the deep aromas of ground cloves or whole cardamon pods. This must open up a whole new world to them, I figure, a world of vibrant experience.

This isn’t exactly easy work for me. Our kitchen is about as narrow as a hallway and the stove (which is often hot) and the counter top (which is always hard) is just opposite the spice rack. They are so young that I have to keep a hand on them as they teeter on the little table along the wall. Were they to fall, it would be a disaster (and putting them on the floor with a jar of a spice entails another set of risks, as I learned the day I had to sweep up a pile of cumin).

Exposing Nina and Pinta to fresh herbs and spices is part of what I consider my job as a parent. It goes along with cooking them good food and having them taste real cheeses, wild fish, and homemade pasta sauces. It’s the same as reading them books and taking them to museums and galleries.

Yesterday, on the suggestion of a number of friends and publications, we took them to the Park Avenue Armory to see an installation by the Brazilian artist Ernesto Neto. “Anthropodino,” which is up through June 14 and should not be missed, is a sprawling wonderland of friendly forms (Pinta said they looked “melty”).

The accompanying brochure describes it as “kind of interior park,” and that’s apt. You walk under the forms, through the forms, and on the forms. It’s more than just a visual experience; the piece provokes almost all the senses.

You can roll around in a giant beanbag and dive into a pool of plastic balls, but for me, the most impressive part of the installation involves the nose.

The moment you enter Armory’s giant space you are enveloped in a faint and new scent. What is it? Something fresh and pungent, it put me on alert. The effect dissipated after a few minutes inside the hall, but it was replaced by something greater.

Many of the hanging forms are filled with spices like turmeric and ginger and herbs like lavender and chamomile. Much time was spent running from one to the other, holding it up to one’s nose and trying to figure out what was inside. It made me feel like a kid again.